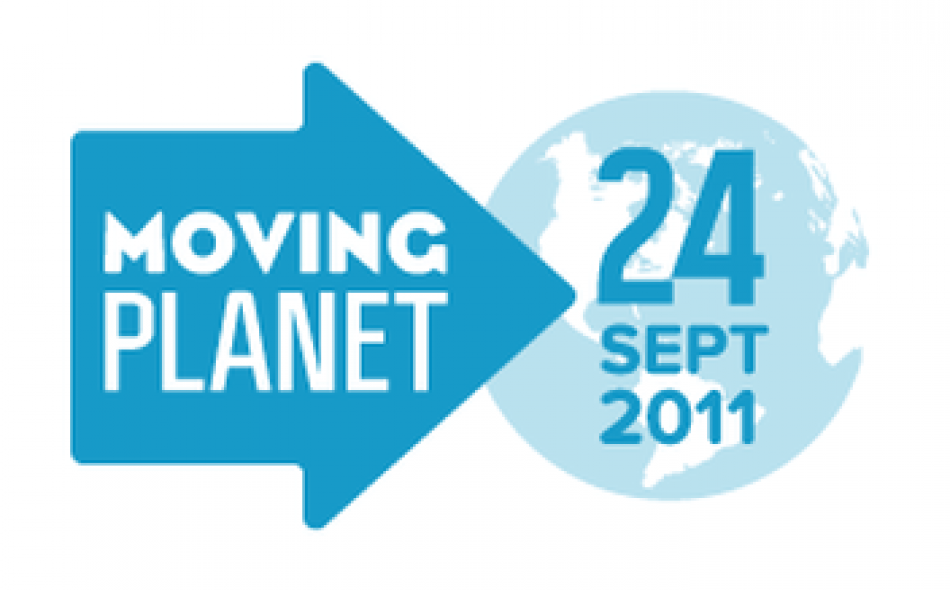 On September 24th, millions of people all around the world are joining together for Moving Planet—a worldwide rally to demand solutions to the climate crisis.

Tomorrow, IATP will join millions of people in 176 countries in Moving Planet, a coordinated a day of activities to advocate for a sharp reduction of greenhouse gases and other sustainable solutions to climate change. The activities will range from bike marches, prayer services, workshops, lectures, presentations of petitions, press releases and concerts. IATP will be at a Moving Planet event on the grounds of Minnesota’s state capitol building in St. Paul.

One of the issues we’ll be talking about there will be finance: how do we pay for a global shift toward a low carbon economy? Over the past three years, IATP has focused on problems with using carbon emissions markets to address climate change, particularly as these markets relate to agriculture. Earlier this month, we published our analysis of the World Bank’s model project in Kenya for reducing greenhouse gases. The project would pay farmers an average of one dollar per year for 20 years to practice Sustainable Agricultural Land Management to sequester carbon emissions in soil. The World Bank would buy the results of the farmers’ work at $4 per metric ton of carbon emissions, converted into carbon emission offset credits to be sold to major polluters to help them comply with greenhouse gas caps without having to actually reduce their own pollution. Because the science of measuring soil carbon is fraught with uncertainties, the World Bank discounts 60 percent of the result of the farmers’ work, although the carbon accountants doing the monitoring and verification of that work will be paid well and in full.

IATP will participate in the October 1–7 U.N. climate change negotiations in Panama City. We anticipate a major effort by the U.S and European governments, supported by the South African presidency of the Conference of Parties to the U.N. Framework Convention on Climate Change (UNFCCC), to make a major push to legitimate “new market mechanisms” in general and agricultural soil carbon markets in particular within the UNFCCC work program.

Given our many criticisms of carbon markets as the proposed chief means to finance climate change adaptation and GHG-reduction projects, we are delighted to hear of two agreements announced this week to invest a total of $1.6 billion in U.S. energy conservation projects. On September 21, two California pension funds announced at the Clinton Global Initiative that they would invest $1 billion in U.S. energy conservation and efficiency technologies. Former U.S. President Bill Clinton said of the announcement, “This is a big deal.” On September 19, a consortium of major companies announced that they would invest $650 million to retrofit buildings for energy efficiency in Miami, Florida and Sacramento, California.

These announcements are indeed “big deals,” not so much for the amount of money invested, since the global need for such investments is so much greater, as for the fact that these are direct investments to reduce greenhouse gasses. Rather than wait for investors in carbon emissions markets to discover a high enough price to induce major emitter investment in new energy production and conservation technologies, the pension funds and the business consortium deal, brokered by the nonprofit Carbon War Room, have decided to act now.

Governments and carbon market proponents, such as the World Bank, have labored in vain for more than 15 years to design and subsidize carbon markets to make them serve the purpose of reducing greenhouse gases. The results of these labors have been plagued with the scientific and methodological uncertainties noted in the World Bank’s Kenya project, to say nothing of the market and environmental integrity failures and fraud in carbon markets under the European Union’s Emission’s Trading Scheme.

The announcements of these new major investments in GHG reduction come as a breath of fresh air following the decision by the U.S. State Department to give a positive environmental impact assessment to the Keystone XL pipeline project. The pipeline would run from the shale oil fields of Canada, often called the Tar Sands, to a refining and shipping installation in Texas on the Gulf of Mexico.

In late August, major environmental organizations wrote to President Barack Obama to implore him to stop the Keystone project, which is expected to emit 150 million tons of carbon dioxide annually, more than the emissions of most countries.  President Obama, under heavy pressure from the oil industry and the Canadian government to approve the project, is expected to announce a decision by the UNFCCC Conference of the Parties (CoP), November 28–December 9 in Durban, South Africa. The Keystone project decision will be among the concerns of Moving Planet participants, particularly in the United States and Canada, on September 24. Opposition to the Keystone project among environmental justice advocates likely will grow as the start of the CoP and President Obama’s decision on Keystone approaches.

If you live in Minnesota, join us tomorrow at the state capitol to show your support and learn more. If you're elsewhere, there are lots of Moving Planet events going on around the world—find one near you.