With labeling plan leaked, what else lurks in Trump's NAFTA?

The Trump administration wants to wrap up the renegotiation of the North American Free Trade Agreement (NAFTA) by the end of April. If the administration has its way, the April round of talks will be the last formal negotiations before the deal is signed, sealed and delivered to Congress under “Fast Track” rules that truncate Congressional deliberations and remove much of Congress’ independent authority to review or change the final deal.

This is a scary prospect.

With secret text and closed-door negotiations—and more than 500 corporate advisers with preferential access to negotiators—NAFTA 2.0 could be worse than the version we’ve been living with for nearly 25 years. We have no idea what’s really in it. Most of the public and press attention is on a few controversial provisions where reforms are being proposed. Meanwhile, negotiations are proceeding fairly congenially, and in great secrecy, on a wide range of other topics such as food safety, biotech approvals, mechanisms to harmonize regulations and product standards, and energy. It appears that much of the supposedly rejected Trans-Pacific Partnership (TPP) is being “cut and pasted into NAFTA through the side door,” as I recently heard Laura Dawson of the Wilson Center explain to state legislators convening in Quebec City to learn about NAFTA.

This is bad enough, but we now know that negotiators are discussing extreme corporate protections that go beyond even the TPP. After the story was broken by consumer advocates in Mexico, The New York Times published confidential details on just one chapter, and what it reveals is alarming. Apparently, the junk food industry—purveyors of sugary drinks, salty snack foods, and prepackaged, fatty and hard-to-resist pizzas and other convenience foods—has convinced U.S. negotiators to push for language in NAFTA designed to stop the U.S., Canada or Mexico from requiring effective consumer warnings on sugary drinks and packaged foods. The Times reports the U.S. wants to prevent any warning symbol, shape or color that “inappropriately denotes that a hazard exists from consumption of the food or nonalcoholic beverages.” At a Congressional hearing the top U.S. trade official, Ambassador Robert Lighthizer, both confirmed the essentials of The Times article, and defended the policy, saying the food label warnings could “create a protectionist environment.”

This anti-labeling policy is unnecessary and inappropriate in a trade agreement, and downright dangerous for our nation’s health. Trade agreements should be about international trade, not blocking legitimate, domestic public health measures. Inserting this industry-written proposal into NAFTA undermines democracy, particularly when done through secret, industry-driven negotiations. The claim of protectionism is particularly specious. The food and drink industry is global, and these labeling laws don’t single out U.S. companies for attention. The top ten biggest food and drink companies are headquartered in Switzerland, Belgium, France, Netherlands, the UK and the U.S.

Warning labels incorporating easy-to-read symbols are part of a multi-faceted strategy to tackle the global obesity epidemic endorsed by the World Health Organization. The effectiveness of such labels is backed up by solid research and experience. The labels work by educating consumers at the point of purchase so they seek out healthier food, leading manufacturers to reformulate their products to avoid the warning labels, thus increasing the availability of foods lower in fat, salt, sugar and calories.

Previous U.S. administrations joined with other countries, representing the interests of the prepackaged food industry, to use World Trade Organization (WTO) Technical Barriers to Trade committee meetings to pressure Chile, Peru and other nations to water down their labeling policies. The USTR has also used the annual National Trade Estimate reports to target these and other policies, such as Chile’s restrictions on advertising to children. After failing to completely stop these measures in the WTO—although succeeding in delaying, weakening and blocking measures in several countries including Israel—the Trump administration is now reportedly pitching an unprecedented proposal that attempts to prohibit specific described types of labels on sugary drinks and prepackaged foods. If agreed to, this policy would affect all three NAFTA countries and could be a model for future U.S. trade agreements.

This proposal will have serious real-world consequences—consequences that lead to premature deaths and the unnecessary expenditure of billions of dollars by families, health care systems and state and federal governments. Canada, Mexico and the United States are each experiencing a public health crisis linked to dramatically-rising obesity rates. According to data from the 2017 OECD Obesity Update, the United States has one of the highest obesity levels in the world, at just over 38 percent. Mexico is close behind, at more than 34 percent obese, and Canada is closing in, with rising obesity rates now at almost 26 percent. Unless this crisis is addressed promptly and effectively, these numbers will even get worse; OECD projections show a steady increase in obesity rates until at least 2030, with obesity levels expected to be particularly high in the United States and Mexico, at 47 percent and 39 percent of the population respectively.

The role of NAFTA in the rapid, dramatic rise in obesity rates in Mexico was documented by IATP in a 2012 paper Exporting Obesity. By increasing the availability of processed foods and meat products derived from cheap commodity grains imported from the U.S. and elsewhere, NAFTA and other free trade agreements contributed to soaring obesity rates and associated health conditions. The “seismic shift” in Mexican diets wrought by NAFTA has continued since then, as The New York Times reported in its “Planet Fat” series, saying NAFTA “let billions of dollars in direct foreign investment into Mexico, fueled the growth of American fast food restaurants and convenience stores, and opened the floodgates to cheap corn, meat, high-fructose corn syrup and processed foods.”

While these food system changes have been particularly associated with Mexico, studies have also found increased caloric intake leading to weight gain and obesity in Canada after implementation of NAFTA and its predecessor agreement, the 1989 Canada-US Free Trade Agreement (CUSFTA). A new study published in the American Journal of Preventive Medicine shows CUSFTA “altered dietary behavior substantially by increasing calorie availability in Canada,” contributing to individuals’ weight gain during a timeframe when obesity rates rose from 5.6 percent in 1985 to 14.7 percent in 2003. At the same time, there was an $1.82 billion USD increase in U.S. investment in the Canadian food and beverage industry and a $5.26 billion USD rise in food and beverage imports from the U.S. A prior study in the Canadian Medical Journal found that lowered tariffs significantly increased consumption of high-fructose corn syrup (HFCS) in Canada. 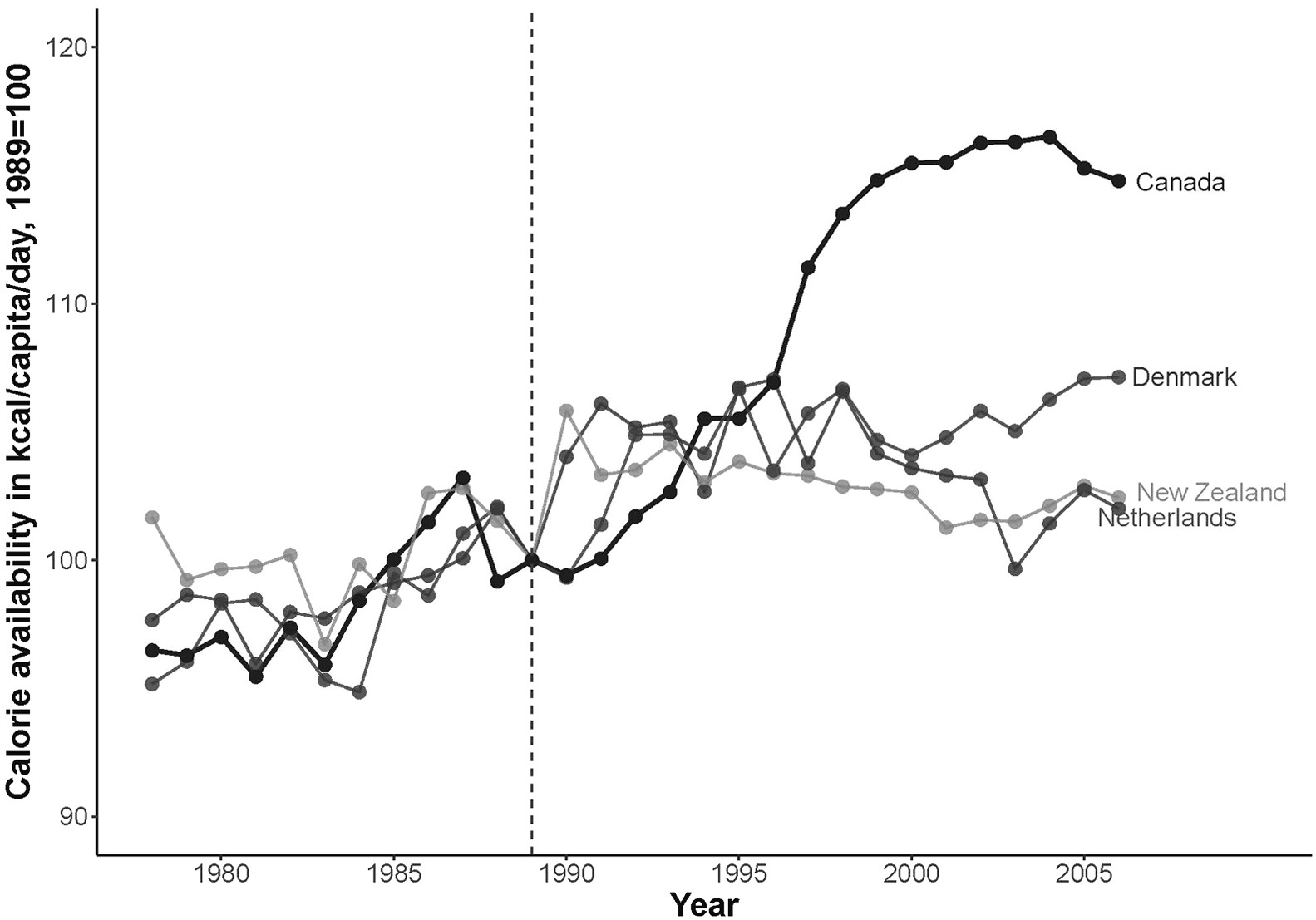 Even in the U.S., an early adopter of sugary drinks, convenience and snack foods, consumption of ultra-processed foods has skyrocketed in recent years. A study in the British Medical Journal found that almost 60 percent of the calories consumed by a representative sample of Americans during 2007-2012 was from ultra-processed foods (defined in the study as food and drink resulting from several sequences of industrial processes, “mostly or entirely from substances derived from foods and several additives used to imitate sensory properties of foods or to disguise unpalatable aspects of the final product”). At the same time, obesity rates in the U.S. have increased at all ages, from kindergartners through senior citizens, and so have diseases associated with obesity and poor nutrition, including diabetes, high blood pressure, heart disease, type 2 diabetes, stroke, arthritis, and some forms of cancer.

Even newborn babies are at risk for a wide range of health complications, because nearly one in four U.S. women are obese before becoming pregnant, and more than six percent of pregnant women have or develop diabetes during pregnancy. Obesity-related health care costs exceed $150 billion a year in the U.S., and are a heavy burden on families, health care systems, and state and federal Medicare and Medicaid budgets. Employers pay increased health insurance costs as well as the expense of obesity-related workplace absences.

Even as the NAFTA talks move toward undermining its authority to do so, the Canadian health agency has initiated rulemaking to address high obesity rates by requiring junk food warning labels. Canada has also proposed restricting advertising of unhealthy foods to children, a measure also under attack by the processed food and drink industry. In Mexico, consumer groups are suing over the ineffectiveness of current nutrition labeling, which actually promotes sugar consumption and requires higher math to decipher. Their goal is to get the government to require symbol-based warnings similar to those in Chile. Meanwhile, states and localities have led the U.S. charge to address the growing crisis, trying everything from mandatory recess and farm-to-school food purchasing, to menu calorie labeling and sugary drink taxes. Legislation to require warning labels on sugary drinks was introduced in Hawaii and New York in 2017.

What can we do?

Is the NAFTA anti-labeling language a coincidence? I think not. The junk food industry is invoking a tried and true strategy, following in the footsteps of the tobacco industry which for years effectively used trade agreements to block “plain packaging” labels. Even though Canada’s top NAFTA negotiator now says he won’t agree to the U.S. anti-labeling text, his informal comments were made only after the U.S demands were widely publicized and attacked by consumer groups. The actual text of the food labeling proposal still isn’t public, nor is any other NAFTA chapter. What else is buried in this agreement? Congress and the public need to demand transparency and accountability from the USTR and President Trump, and make sure that the renegotiated NAFTA isn’t even worse than what came before.