In June of this year, 24-year-old Mexican-born Miguel Angel Guzman Chavez started a new job picking tomatoes in Georgia. Five days later, soaring temperatures led him to collapse in the field, sending him into cardiac arrest. Two hours later, he was pronounced dead.

The Department of Labor’s Occupational Health and Safety Administration (OSHA) keeps a public catalog of Fatality and Catastrophe Investigation Summaries. A look through the fatalities in the agricultural industry reveals line after line of stories just like Miguel’s:

The accounts of these deaths paint a telling picture that highlights the serious dangers currently associated with farm work in America. Among the findings of the new Intergovernmental Panel on Climate Change report released last weekend was the expected increase in heat-related mortality in the coming decades. As climate caused extreme heat events become more frequent, worker protection statutes urgently need to be updated to address risks for those working outside, including the nation’s farm workers.

While rising average temperatures are a significant concern in agriculture, the more pressing worker safety issue is the increasing frequency of extreme heat. The U.S. has already seen an increase in extreme heat days over the past century. This trend will continue, (see map below) with some areas seeing a six-fold increase or more by the mid-century. 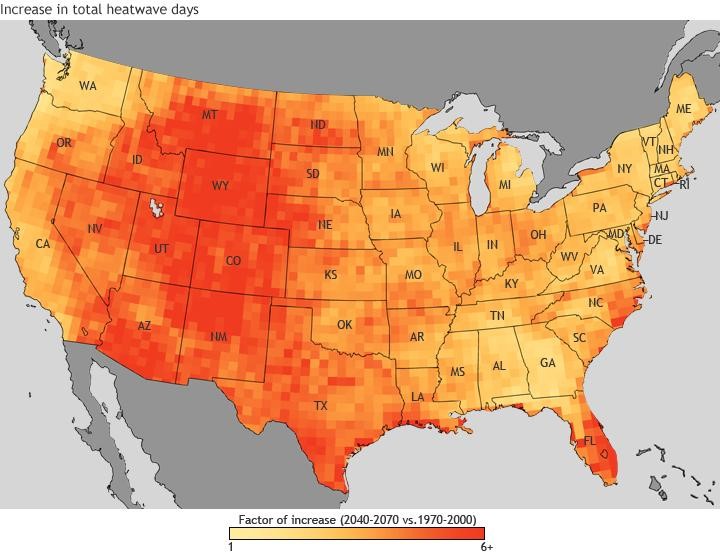 Heat-related illness is the leading cause of weather-related deaths in the U.S., and heat-illness has a disparate impact on communities of color, low-income earners, and those who work outdoors. Agricultural workers fall at the nexus of these vulnerabilities. The typical farm worker is Mexican-born, performs arduous work for long hours, and earns well below the poverty line without health insurance. As increased incidences of extreme heat become the new normal, it is time to rethink worker protections as current safeguards are not enough. Heat-related illness occurs when the body cannot lose heat fast enough to reduce its temperature to a normal range, below 100 degrees F. Acute forms of heat-illness can manifest as dizziness (heat syncope), heat rash, muscle cramps, seizures, heat exhaustion, and heat stroke, which can be fatal. Prolonged, repeated exposure to extreme temperatures can lead to long-term complications such as Chronic Kidney Disease.

OSHA currently has no federal regulations protecting workers in extreme heat. While the National Institute of Occupational Safety and Health (NIOSH), a division of the Center for Disease Control, has recommended such regulations since 1972, OSHA has rejected petitions from NIOSH and other groups, contending that heat-related hazards are already covered under the existing General Duty Clause. This clause mandates: “Each employer shall furnish to each of his employees employment 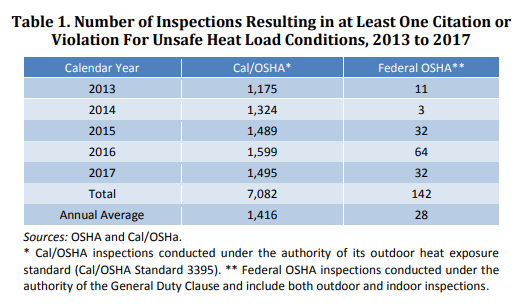 and a place of employment which are free from recognized hazards that are causing or are likely to cause death or serious physical harm to his employees.”

While OSHA contends that this clause is sufficient, they only issue an average of 28 heat-related citations per year. The Bureau of Labor Statistics attributes an average of 37 worker deaths and thousands of worker injuries every year to heat-related stresses. It is clear that the current federal regulation falls short of adequately protecting the nation’s workers.

The statistics on heat-related injuries and deaths are self-reported by employers and employees, and as such, are underreported for several reasons. Employers minimize reporting injuries and deaths to avoid fines, insurance increases and tarnishing their reputations. Employees might also be reluctant to report hazardous working conditions or injuries for fear of retaliation.

These factors are further compounded in the agricultural industry. Harvest times often fall in the warmer months. Workers are paid by the amount of produce picked, rather than by the hour—a payment structure that encourages long days with few or no breaks. During these long, hot days out in the fields, shade and water are often sparse or not readily accessible. Additionally, because heat-stress symptoms are very similar to those of pesticide exposure, it is often difficult to attribute the cause definitively to the heat, which can compound the problem of underreporting.

A recent survey by the Department of Labor found that approximately 70 percent of agriculture workers are Mexican-born, less than a third of whom are documented, 22 percent are work-authorized, and 47 percent undocumented. Undocumented and work authorization-dependent workers are much less likely to report poor working conditions, injuries, or even death due to the added threat of deportation. This leaves the farm worker population particularly vulnerable to both acute and long-term effects of heat illness.

While OSHA and its state counterparts provide advice on keeping workers safe in extreme heat, only four jurisdictions (California, Minnesota, Washington and the U.S. military) have statutory heat protections for workers. California’s protections are the most rigorous. Title 8, Section 3395 in California’s Code of Regulations covers heat illness prevention for outdoor workers. Rest breaks, training on heat-stress, and reasonable access to water and shade are among its provisions. It also requires monitoring of new hires during their acclimatization period and the establishment of emergency response protocols. Examining the table below, it becomes clear that California’s regulations to protect workers relating specifically to heat-stress are considerably tougher than OSHA’s system.

NIOSH has made a list of recommendations for heat-related provisions to be included in a comprehensive worker protection statute, including allowing workers to drink water at liberty, at least one pint per hour. Additionally, employers should be required to provide reasonable access to water and shade. To limit exposure, work/rest regimens should be established, and training on recognizing signs of heat-stress should be required for workers and supervisions. Companies should also have well-understood protocols in place for responding to heat-stress. As workers are more likely to succumb to heat-illness in their first few days on a job, provisions requiring closer supervision during this acclimatization period should be included in any heat stress regulations.

While states are increasingly taking the lead in responding to climate change, protecting outdoor workers is a major gap. A strong federal standard, following NIOSH’s recommendations and enforced by OSHA, is urgently needed. Several organizations, including Public Citizen, the United Farm Workers Foundation and Farmworker Justice, have petitioned OSHA, calling on the agency to consider strong new regulations (you can read the full petition here). New protections for agricultural workers related to heat stress are critical in this age of climate change. Lives depend on it.