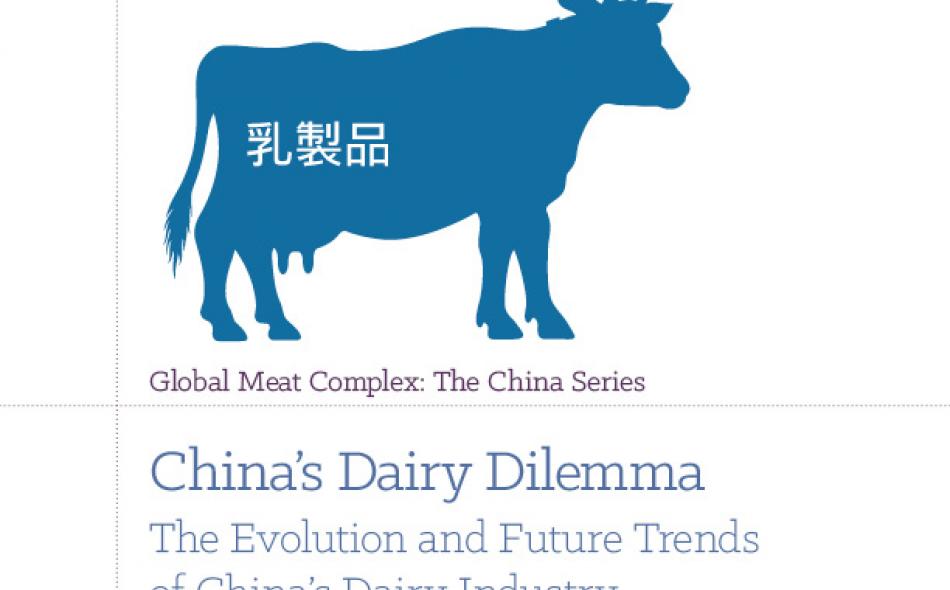 Government policy is a key factor in understanding the ongoing transformation of the dairy sector in China: there appears to be a strong belief that economies of scale and the industrialization of production practices will lead to an adequate and safe dairy supply. It also presents growing challenges for the government given rising costs of feed and fodder, and the desire to support domestic dairy firms in a globalizing sector.

China’s self-sufficiency in milk production has been declining rapidly in the past years. However, China’s dairy consumption is expected to increase 38 percent by 2022. Dairy imports are therefore expected to rise by 20 percent with 82 percent of those imports being skim or whole milk powder.

The 2000s saw a rapid increase in output and fierce competition among dairy companies. A large number of new products were introduced, and the largest firms extended their supply chains and began sourcing milk from outside the traditional dairy regions. The pace of consolidation in the sector grew, and small dairy processors began to disappear. By 2006, four major domestic dairy companies (Yili, Mengniu, Sanlu and Bright) accounted for close to half of all dairy sales with more than 700 smaller companies splitting the other half. However, even in this boom period, the bulk of the milk supply came from millions of small farmers, supported by national and local government programs. Despite consolidation in processing and marketing, in 2006, more than 81 percent of China’s dairy farms raised fewer than five cows.

However, market failures in the 90s and early 2000s set the stage for the 2008 melamine scandal that would drastically restructure China’s dairy production and alter the fate of many of these small producers. Ever increasing buyer power of a few large dairy processors, combined with a large number of competing firms and products kept consumer prices low. Small producers, whose feed and other production costs continued to rise to keep up with greater demand, were squeezed. To keep operating costs low, dairy processors helped spawn a vast network of milk-collecting stations, traders, truck drivers and other middlemen to source milk from different regions. As large processors exerted downward pressure on prices through the supply chain, problems with adulteration began to appear. Initially, this took the form of extra water added to milk to increase the volume sold, but over time other substances were added as well, culminating in the melamine scandal in 2008.

The scandal drastically damaged Chinese consumers’ confidence in domestic dairy products and created a large opportunity for foreign firms. The Chinese government responded by pushing for further consolidation of the dairy industry and dairy production—actively demanding the creation of large-scale milk production units and sourcing from large farms. Chinese companies responded with different tactics including more overseas investments and vertical integration. The result of all this has been a massive shift away from traditional dispersed dairy production to concentrated and standardized farms.

In a speech in 2006, Premier Wen Jiabao said, “I have a dream and my dream is that each Chinese person, especially the children, can afford to buy one jin [500 g] of milk to drink every day.” While government policy has focused on dairy as a major source of calcium and protein, nutrition studies show that increased dairy consumption has not guaranteed increased calcium intake in the Chinese population. These studies point to the need for a more holistic nutritional analysis of dairy and meat consumption and public health.

The top three Chinese dairy companies—Yili, Mengniu and Bright—now take up close to 60 percent of the market share in sales for liquid milk in 2012. But these “Chinese” companies also have partial foreign ownership or own foreign ventures themselves. Several companies from the U.S., EU and New Zealand have also entered the Chinese liquid milk market by exporting final products and selling through online grocery services such as Yihaodian or large retailers such as Tesco Plc.

Food safety issues have greatly changed Chinese consumer choices, thereby transforming the dairy sector itself, particularly in their preference for imported milk powder. Upper and middle class parents prefer to pay higher prices for imported products (infant formula in particular) which they consider safer and better. Increasing demand for milk powder of foreign brands has spurred Chinese’ overseas bulk-buying. It has also spurred innovative tactics by Chinese companies to be seen as foreign brands, their procurement from abroad and an increase in online Chinese vendors who hire shoppers in foreign countries to purchase foreign infant formula brands to be shipped back to China. Chinese consumer preference for imported products has also encouraged more and more dairy companies to build processing factories overseas. Shengyuan, Yili, Yashili and Bright have all built infant formula processing factories in other countries. Meanwhile, four foreign brands: Mead Johnson, Danone Dumex, Nestle’s Wyeth and Abbott have taken over 42 percent of China’s infant formula market (all implicated in a price-fixing scandal that the Chinese government cracked down on). This has led domestic dairy producers to urge Chinese consumers to “give up their blind faith in foreign formula brands.”

With greater consolidation, China’s dairy industry, now dominated by big domestic and foreign financiers, has opted to import foreign breeds as they produce almost double the milk of Chinese hybrids and local breeds. Since 2009, China has imported 250,000 cows, with 100,000 (25 ships worth) imported in 2012 alone (see figure 9). Breeding cow imports from Australia have risen by 25 percent to over 15,000 cows and from New Zealand by 13 percent to more than 9,600 cows.

Large-scale operations such as the Modern Dairy are also driving competition for acquisitions of large farms and creating a demand for more and higher-quality feed for foreign breeds. Many of the small producers use corn silage, but large farms are increasingly using processed feed made with alfalfa, creating pressure to increase domestic acreage of alfalfa and sourcing alfalfa abroad. There are now over 40 farms in China with more than ten thousand heads of cattle (grazing and under construction) to fulfill the government’s criteria of modern, standardized and scaled dairies. Alfalfa imports increased by 59 percent in 2012 compared to the preious year. The U.S. accounted for nearly 95 percent of China’s imports.

The upward trend of alfalfa imports has created concerns in the government. In 2012, the MOA launched a program to boost alfalfa production. The alfalfa exports to China are also creating public interest concerns in major exporting regions. It costs dairy farms in California’s central valley twice as much to transport alfalfa to Southern California than to ship the crop to Beijing from the same location. Moreover, it is resulting in water scarcity. The amount of alfalfa shipped to China in 2012 could supply the annual needs of roughly 500,000 U.S. families.

As the dairy industry scales up and intensifies, cows are likely to face greater vulnerability to diseases such as brucellosis, mastitis, foot and mouth disease and anthrax which have already been a problem in China. The dairy cattle vaccine market is expected to grow substantially.

This has serious implications for the ever-rising use of antibiotics and vaccines in the livestock sector and the growing problem of antibiotic resistance in China. In 2008, China already produced 210 million kg of antibiotics, nearly half of which was put to use in the livestock sector. In contrast, the U.S. uses over 29 million pounds (13.2 million kgs) of antibiotics annually on livestock which is 80 percent of total antibiotic use in the country. Antibiotic resistant genes leading to disease resistance are becoming a source of major concern for the Chinese government. The Health Ministry has even launched a National Antibacterial Resistance Investigation Network.

Another health concern related to the dairy boom is the massive decrease in breast-feeding. China’s breast-feeding rate is only 28 percent today, lower than the global average of 40 percent and far lower than the 50 percent goal set by the State Council. According to UNICEF, illegal activities (such as infant formula marketing to lactating mothers) have seriously disrupted efforts to promote breast feeding and are “the main factor in declining breast-feeding rates” in China.

In the wake of food safety scandals, land, water and labor constraints, and growing disenchantment with small dairy producers, government support and consumer concerns are leading to more consolidation, much larger-scale farms and intensification of the dairy sector. Ironically, this is creating a need for more imports of “higher quality” feed, cows and genetics, leading to a larger global environmental footprint and increased vulnerability of the domestic sector on foreign resources. Chinese dairy companies are also increasingly sourcing milk from abroad. Moreover, this consolidation and restructuring is doing little to curb the power of the top few domestic dairy producers and the growing power of transnational dairy companies as both the melamine scandal and the price-fixing probe demonstrate.

This oligopolistic power continues to create downward pressure on the entire dairy supply chain, forcing small dairy farmers out of production and creating conditions for future food safety scandals and market manipulations. The need for feed and milk sources is also leading to land-use and natural resource concerns in regions as far flung as Sudan, New Zealand and California.

As dairy is further industrialized, it is increasingly an economically unsustainable endeavor for small-scale producers in China while at the same time environmental and public health risks are rising. Much more debate and analysis also needs to take place of China’s young urban population, their calcium and protein intake and balanced diets as traditionally healthy Chinese diets give way to more processed dairy products and foods, with an overemphasis on meat consumption.

These issues are also not unique to China; the U.S. model of industrial dairy production, CAFOs and overconsumption of dairy, meat and processed foods has already led to many of these same problems and worse. These issues that span market power, global commodity chains, environment and public health merit deeper thought and discussion and point to the need for further research, collaboration and exchange among researchers, officials and civil society organizations across continents. There is an alternative: a transformation of the current monolithic system of industrialized mass production and consumption toward decentralized agroecological, just, healthy and humane systems.