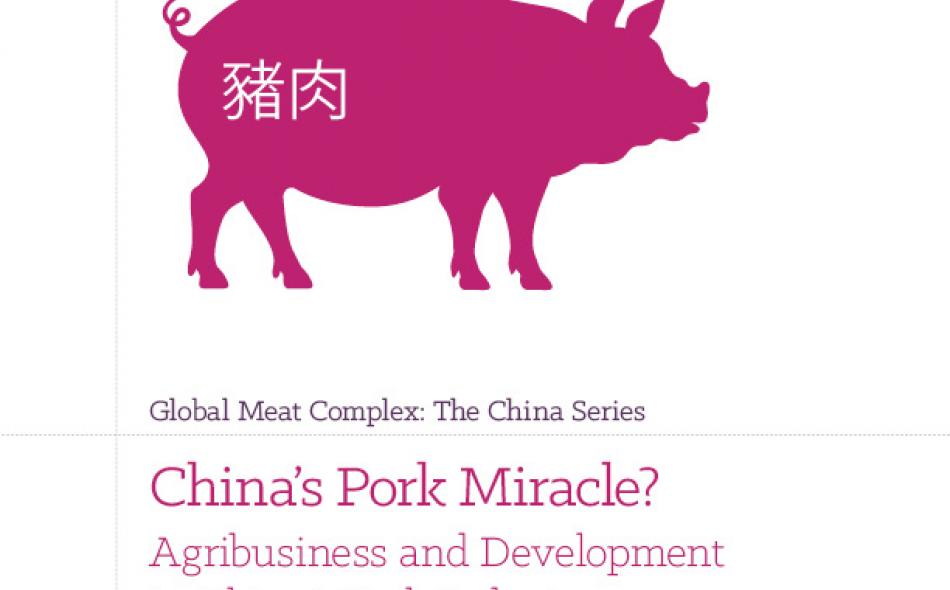 Agriculture has helped fuel the “China miracle.” Since 1978, agricultural and food output has soared, Chinese agribusiness firms have become key players in domestic and international markets, and by all accounts, China has been highly successful in overcoming land and resource constraints to feed its population of 1.3 billion people. The country is celebrated for its successes in reducing poverty and hunger over the last 30 years, and more recently, for creating an agrifood system that makes eating “high on the hog” a possibility and reality for many Chinese people.

Pork is at the heart of this miracle. A hallmark of the post-1978 agricultural development model is ramping up the production, sale, and consumption of meat. Processed and packaged meats are the fastest growing market segments, reflecting the increasing influence and operation of pork processors, and the more general trend towards processed foods that can be shipped, stored, and sold with a longer shelf-life in super- and hyper-markets. These trends are also reflected in the Shuanghui (now called the WH Group to take on a more international identity) buyout of Smithfield Foods, a move that will increase China’s pork supplies, strengthen Shuanghui’s brand within China as “safer” meat with higher consumer status because of its US origin, and further generate and shape consumer demand for industrial pork. The Shuanghui-Smithfield deal is a matter of political and economic interest, but also signals a much more basic insight: pork, and the systems and actors that produce it, are central in China’s agrifood system with increasingly global inter-linkages and implications.

Government officials support increased pork production and consumption through subsidies, investments, and favorable policies for medium- to large-scale industrial operations. Agribusiness firms control much of the production and sale of meat (and agricultural products more generally), often through production arrangements with commercial farmers, and with financial support from public and private investment. Smallholder farmers either opt out of pig production in the context of increasing consolidation of the industry, become specialized hog producers, or are transformed into waged, typically migrant, laborers. And consumers eat more pork than ever before, with wealthier eaters preferring industrially produced meat, which is viewed as more strictly regulated, and therefore, safer.

Yet, food safety, public health problems and environmental pollution associated with the sector are also increasingly becoming bottlenecks--evident in the starkly vivid images of dead pigs floating in a river near Shanghai earlier in 2013. This dialectic between pork’s socio-political importance in China and its mounting externalities will shape Chinese policy towards pork production, trade and consumer choices in the coming decade.

This report builds on Mindi Schneider’s 2011 IATP report, Feeding China’s Pigs: Implications for the Environment, China’s Smallholder Farmers and Food Security. It addresses the question of how and why China’s animal husbandry sector has shifted towards increasingly industrialized meat production, which in many ways replicates the dominant and unsustainable U.S. model, but at an even larger scale. The analysis reveals and describes an interrelated set of drivers, both state-led and otherwise, that have increased industrial meat production and consumption in China throughout the reform era.

Section II provides a synopsis of pork industry development in China, including a historical overview of pork production, a summary of reform era policies, production and consumption trends, and an analysis of current and continuing restructuring, including some Chinese perspectives on the Shuanghui-Smithfield deal. Section III examines some of the motivations that underlie swine sector industrialization, including the politics of government production goals and food safety, and how these drivers play a role in the construction of consumer demand. Section IV examines some of the key actors, ideas, and mechanisms of pork development. It details leading agribusiness firms called Dragon Head Enterprises, and the Chinese versions of vertical integration and contract farming. Analysis in this section reveals that ownership and operation in China’s pork industry is largely domestic, but based on logics and practices common to agribusiness-led industrial production everywhere. Section V discusses the presence of foreign firms in China’s pork industry, serving as a trace on global consolidation as it touches down in China, and as China simultaneously begins to change the dynamics of consolidation. The last section addresses some of the impacts of this industrial mode of livestock production, which Chinese officials and agribusiness seem to have embraced whole-heartedly. It describes some of the challenges the U.S.—as the originator of the model—is facing in public health and environmental pollution today, relating them to development in China with the hope that these issues can be faced and effectively confronted.

This report has shown that in a system that was decentralized in the late 1970s and early 1980s, state support has made Dragon Head Enterprises (a government status bestowed upon private or public companies that meet a set of criteria for agriculture development) the leaders in producing, selling, and profiting from pork and agricultural products more generally. As these firms are becoming increasingly capitalized and invested, they are also becoming increasingly powerful in global agrifood markets. The Shuanghui acquisition of Smithfield Foods is but one example of this phenomenon; it is a profound example given the scale of the deal and the media attention it has garnered, but it is by no means an isolated incident. The central government adopted a set of policies in 2000 to encourage Chinese state and private firms to invest in operations and infrastructure abroad. This “go out” (zou chuqu) strategy continues today, and is related to new forms of global consolidation in the pork industry, as well as to China’s much-reported land grabs (see IATP’s The Need for Feed: China’s Demand for Industrialized Meat and Its Impact in this series). Firms like Beidahuang, COFCO (the China National Cereals, Oils, and Feedstuffs Corporation), the Chongqing Grain Group, the New Hope Group, the China National Agricultural Development Group, and others have all “gone out” for land, agricultural resources, and/or other companies abroad.

The pork industry in China is massive, as are its implications for soil and water pollution, climate change, public health, and rural livelihoods. But the industry in China is in many ways the industry in the US and elsewhere, a fact that analyses and policies need to take into account. Critiques of China’s pork miracle must also be critiques of the practices and structures of industrial livestock agriculture on the whole. At the same time, as Chinese domestic firms play ever more important roles in global markets, it seems likely that agribusiness politics in the future, both in China and on the world stage, will be increasingly Dragon-Headed. Understanding what is general and what is particular, and how the two influence one another, is crucial for understanding the rise of agribusiness with Chinese characteristics. It is also necessary for framing and implementing more just, sustainable, and diverse agrifood systems that can reverse the damages wrought by decades of global agricultural industrialization. This, surely, is our most pressing task.