Fair or Fowl? Industrialization of Poultry Production in China 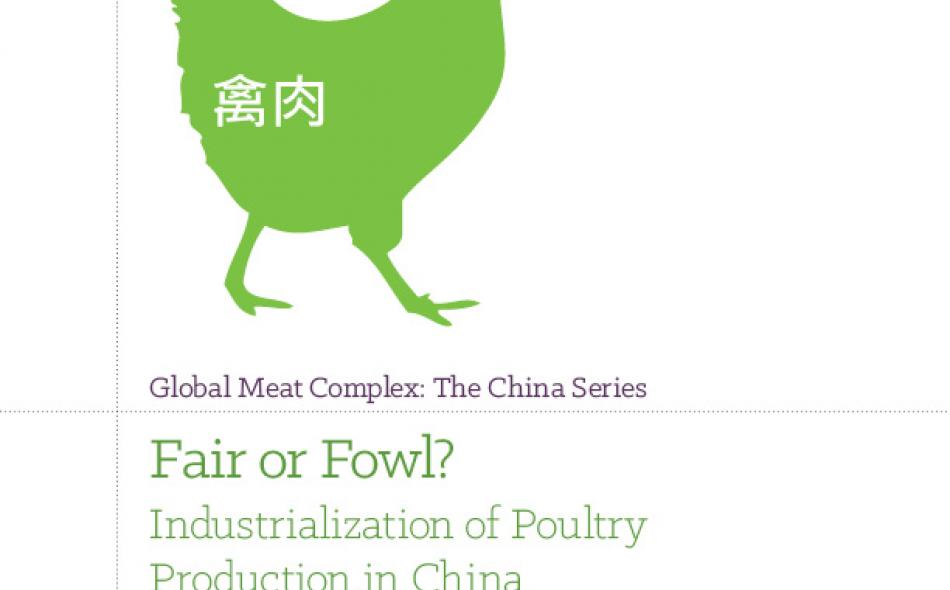 To read the full document, downlaod the report.

Poultry meat and eggs were not traditionally an important part of the Chinese diet. They were considered luxury goods for consumption on special occasions. Over the past three decades, however, China’s per capita poultry consumption has increased from barely 1kg to over 9kg per year. Today, the poultry industry in China is dominated by chicken production which comprises 70 to 80 percent of all poultry production. On a macro level, by 2011 the country was already the second largest producer of poultry meat and eggs in the world and the size of the industry continues to expand.

This report tracks the growth of the Chinese poultry industry during the past three decades and the implications of this development. China’s poultry industry is going through rapid industrialization, characterized by intensification of farming, horizontal consolidation and vertical integration. Both the size of the industry and changes in poultry production practices (in conjunction with development in the livestock sector as a whole) have significant implications for public health, the environment, rural livelihoods and animal welfare.

The poultry industry is, in some ways, the most vertically integrated and industrialized system of livestock production in China. The policy emphasis in this sector (like all other meat sectors in China) is on scaling up and further intensification. The sector has a large number of firms competing over low prices with low profit margins, leading to immense pressure by firms to cut costs. At the same time, to remain competitive and meet production and consumption targets, firms are dramatically increasing production—raising more and more birds in confined spaces.

Population growth, rising income and urbanization are commonly seen as the main drivers of poultry demand in China. However, government policy choices, growth and marketing of quick service restaurants (QSRs) and super markets, food safety concerns, costs of production (labor, land and feed) and environmental limitations (including feed, land and water constraints) have and will continue to shape demand in the livestock sector and poultry is no exception.

With rising concentrations of poultry in production facilities, more food safety scandals are coming to light. Scandals such as the KFC “instant chicken” scandal where more than 18 different antibiotics and other chemicals were found in retail chicken and epidemics such as the recent avian flu outbreak in 2013 lead to sharp drops in poultry demand. And they are changing the way poultry is marketed and consumed. The cost-cutting practices are also leading to serious worker safety issues as demonstrated by the fire that killed a 120 people in the Jilin Baoyuanfeng Poultry Plant last summer.

Food safety concerns, in turn, are driving the government and consumers to demand greater control of the supply chain, slowly shifting consumer habits towards more processed poultry bought in supermarkets. Currently, most livestock products in China are distributed by many small traders. Outside tier-one cities, the cold chain is still fragmented, supporting wet markets as the major distribution channel. However, the biggest future shift seems to be the expansion of organized retail in marketing poultry products—taking away the share from wet markets. And retail outlets are capitalizing on food safety concerns as a way to increase their market share and will contribute to shifting production practices by exerting greater control over the supply chain.

However, wet markets and consumer preferences for fresh meat will continue to dominate the Chinese market in the coming decade. Wet markets are being singled out as a major source of disease epidemics; while “specialized” producers, much smaller and weaker than the firms that contract with them, are being blamed for food safety issues. Food safety concerns are also facilitating major global powers such as Tyson to acquire farms in China and control the entire production process through a “grow out” model that owns and manages the entire supply chain—providing organized retail with a “traceable” supply of industrial poultry, building consumer confidence that the product is “safe.” Tyson, Cargill and Brazil’s Marfrig and BRF are all integrating themselves in the Chinese market. Meanwhile, the top Chinese companies such as Wens are producing close to a billion birds a year, through contracts with farmers, to meet Chinese demand. Specialized (smaller farms) are either rapidly disappearing or consolidating into much larger scale of production to remain competitive. All signs indicate that this process is set to intensify in the years to come as both poultry production and consumption are expected to grow.

China is a net importer of poultry meat in terms of volume and a major importer of poultry by-products, such as wings and feet and internal organs which are considered offal in the rest of the world. However, China’s poultry imports have been very volatile in the last 15 years because of frequent trade disputes, particularly with the U.S. In 2011, three-fourths of China’s poultry imports were from Brazil and more Brazilian processors are receiving certification to export to China contingent on food safety standards. Brazilian companies are competing with U.S. ones for top export spot for various poultry parts. Imports of chicken feet from Brazil have declined, while those from the U.S. have dramatically increased since April 2011. Brazil is China’s biggest wing exporter. Despite a declining overall trend in imports in recent years, Rabobank believes that China’s poultry imports will increase because of China’s complementary market for offal compared to the rest of the world. Chinese companies are also expected to invest more overseas in Brazil, Argentina and the U.S. to secure poultry supply for the Chinese market.

The industrial model of production continues to present significant challenges to China’s food safety, public health, environment and viable rural livelihoods. The report demonstrates that a much more systemic analysis is needed to examine the true costs of this model and the costs and benefits of consuming poultry produced in this manner. A finer look at the structure of the market, firm behavior and price competition is urgently needed to understand the perverse incentives this model is creating to cut costs upstream. This “race to the bottom” is leading to a host of problems related to food safety, worker health and posing significant challenges in building a remunerative and regenerative agriculture system that involves small producers. The current model, as in the U.S., continues to externalize the true costs of this production at the expense of much healthier and agroecological choices. However, deliberate policy choices have the potential to alter this system towards a more sustainable pathway in the coming decade. Some alternatives such as Beijing’s organic market and community supported agriculture projects are already underway as Chinese urban consumers are waking up to the health and ecological costs of this mode of production. It is hoped that this report contributes to such a rethink on alternatives to the current approach.