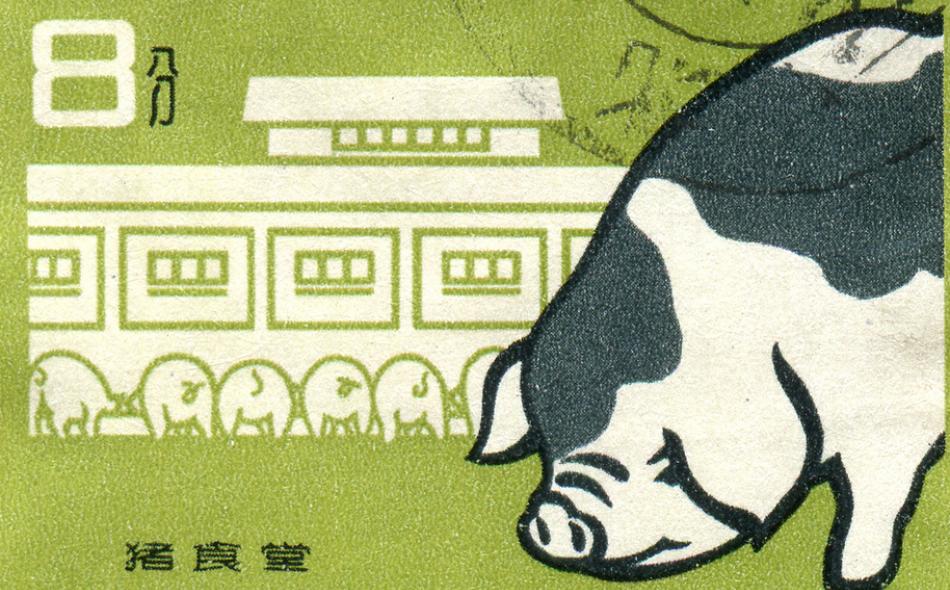 Starting in 1979, pork became the most produced and consumed meat in the world. The reason for its ascent to the top of the global meat heap is simple: China. In 2010 alone, farmers and companies in China produced more than 50 million metric tons of pork, virtually all of which was sold and consumed domestically. This Chinese pork boom, which today accounts for half of all the pork in the world, is the result of a set of policies and trade agreements that liberalized and industrialized Chinese agriculture and enabled enormous production increases.

In the quest to feed 21 percent of the world’s population on nine percent of its arable land, Chinese central authorities prioritize ensuring a steady supply of low-priced pork as an important component of food security (China maintains a strategic pork reserve, the only one of its kind in the world). In the more than 30 years since Deng Xiaoping introduced the first major set of reforms to liberalize China’s economy in 1978, policies and investments have worked together to shape and implement a model of agricultural development that privileges industrial agriculture and increased meat production and consumption. While some of these measures have played a role in decreasing the number of hungry in the country, the crises of industrial agriculture are emerging, with serious implications for the environment, public health, smallholder farmers, and questions of food security. This paper focuses on the pork sector in particular—including the feeding of swine—as it relates to these pressing issues and challenges.

Long before “Reform and Opening,” pork was critically important in Chinese agriculture and diets. Pigs were domesticated in China some 10,000 years ago, and for millennia, virtually every rural household in China raised at least one or two pigs each year. Smallholders defined the structure of pig raising in China all the way up until the early 1980s, when industrial forms began to emerge. Today, smallholder farmers struggle to survive in the new market agro-economy, while specialized household producers and large-scale commercial operations are actively supported by policy and investment. A small number of vertically integrated, and predominantly domestic, agribusiness firms are claiming an ever-increasing share of pork production, processing and marketing. Changes in swine feeding and China’s feedstuffs imports are at the heart of this shift. The industrialization of pig farming in China has taken place in concert with the development of a multi-billion dollar (USD) feed industry.

Soybean imports are keeping the swine industry in China afloat. In order to overcome the limitations of domestic production for feeding millions of pigs, authorities enacted a series of measures to liberalize China’s soy trade, including those required by World Trade Organization (WTO) accession protocols, starting in the early 1990s. Imports quickly overtook both soy exports and domestic production, and today, China is the world’s leading soybean importer. In 2010, more than 50 million metric tons of soybeans came into China, mostly from the United States and Brazil. These imported beans accounted for 73 percent of soy consumption in China, and were used exclusively in the production of soybean meal for livestock feed and soy oil for cooking (meal and oil are coproducts in the soy crushing process). In stark contrast to the pork industry, which a handful of domestic companies dominate, transnational agribusiness firms including Archer Daniels Midland, Bunge, Cargill, Louis Dreyfus (together, ABCD) and Wilmar own about 70 percent of the soybean crushing industry in China. In recent years, China has enacted measures to cool the dominance of foreign firms in support of domestic operations. Whether or not these moves will be effective remains to be seen.

Soy is particularly important in commercial pig feed mixes, but for smallholder and specialized household farmers, corn is the most used feedstuff. Corn is protected as a “strategic crop for food security,” primarily because of its role as a staple food for human consumption. Recently, however, corn is also being used in the manufacture of industrial products, and increasingly in commercial livestock feed. In 2010, China was a net corn importer for the first time since 1995. The buyers, a state-owned conglomerate and a private agribusiness firm, used the corn to produce feed. Authorities claim that 2010 was an anomaly, but 2011 looks to be another record corn import year for the Middle Kingdom.

The consequences of these changes in pig production and pig feeding have wide-ranging impacts. In terms of environmental degradation, agriculture in general—and livestock farming in particular—are the most important sources of pollution in China. Livestock farms produce more than 4 billion tons of manure annually, much of which contributes to nutrient overload in waterways and subsequent eutrophication and dead zones. Globally, as more and more land is converted to intensive monocrop production of soybeans and corn (and others in a narrow range of industrial feed crops), pesticide and fertilizers pollute waterways, biodiversity declines, natural carbon sinks are destroyed, and greenhouse gases are emitted in all stages of intensive feed production and transport.

Industrial pig feeding also carries a range public health concerns. China is becoming increasingly infamous as a site of food safety scandals, most of which stem from feed additives such as hormones and growth regulators ending up in meat and livestock products. On top of this, the prophylactic administration of antibiotics in confined animal feeding operations (CAFOs) has resulted in antibiotic-resistant and disease-causing organisms emerging in China, just as in the United States and Europe. Other threats to public health include the emergence of so-called diet-related diseases of affluence, including Type 2 diabetes, coronary heart disease, obesity and a range of cancers. At the same time, the current model of agricultural development has failed to close the gap in dietary and income inequalities that continue to plague China, especially in the form of differences between rural and urban populations.

Beyond environmental and health impacts, increased liberalization of agriculture is taking a toll on China’s rural population. Smallholder farmers struggle to access markets, meet new market standards, cover costs of production and maintain an adequate farm labor force. In the context of mass urban migration, many young, and especially male, rural residents are flooding China’s cities as migrant workers, leaving the elderly, women and children to tend their households and farms alone.

For its people, environment and penchant for self-sufficiency, a reassessment of the actual impacts of industrial pork production and pig feeding on China’s population and environment is needed. Redirecting research and subsidies from industrial systems to locally embedded systems, while maintaining food reserves, are steps in the right direction toward serving national food security, development and environmental needs.