Food safety and the EU-Mercosur Agreement: Risking weaker standards on both sides of the Atlantic

The EU-Mercosur Free Trade Agreement (FTA) is designed to increase the flow of goods among countries. In addition to reducing tariffs and quotas on meat and other goods, it includes measures to streamline food safety approvals in ways that could result in lower standards. Based on the published texts of the Agreement in Principle, if implemented, the FTA would:

THE AGREEMENT LIMITS APPLICATION OF THE PRECAUTIONARY PRINCIPLE

The EU-Mercosur Sanitary and Phytosanitary Measures (SPS) chapter doesn’t mention the prevention-focused precautionary principle that is enshrined in EU legislation and its founding treaties. Instead, the only explicit reference to the precautionary principle is in the chapter on sustainable development, which typically excludes from its scope human, animal and plant health issues that are covered by the SPS chapter, and in any event is not enforceable. The EU-Mercosur SPS chapter instead relies on the World Trade Organization SPS Agreement and places a great deal of regulatory authority in the hands of committees in alignment with the WTO and the UN’s Codex Alimentarius equivalence guidelines and standards. The WTO and Codex do not follow the precautionary principle and instead develop regulations by weighing comparative risks in a committee system heavily influenced by corporate lobbyists. These international guidelines are frequently weaker than national standards. For example, Codex guidance allows much higher pesticide residue on foods than EU standards, including for the highest hazard chemicals.1 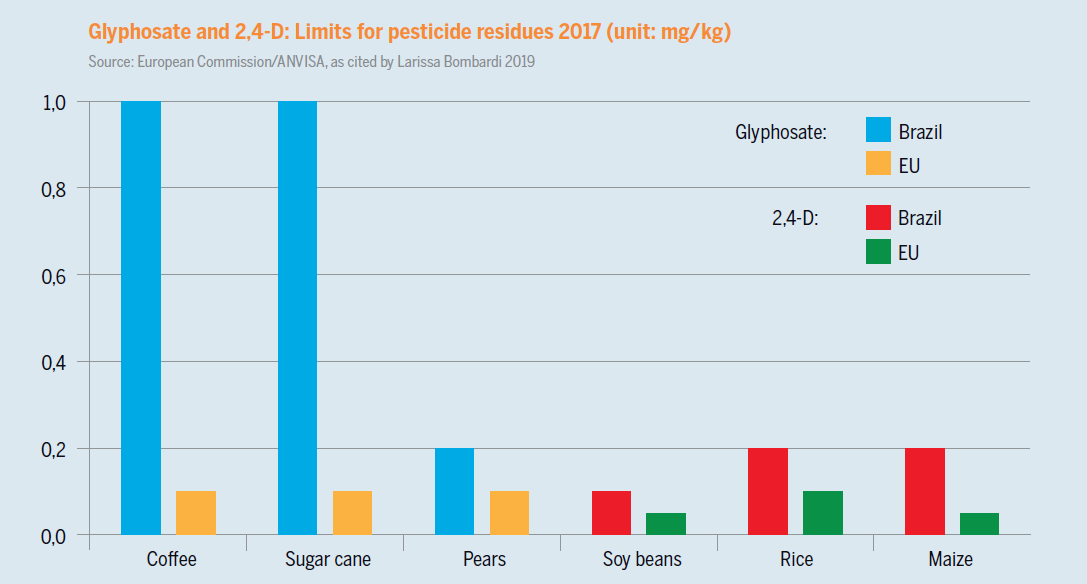 The EU does not apply stricter pesticide residue limits than Brazil throughout. The Brazilian limits for glyphosate residues in soya beans, wheat and peas, for example, are much lower than in the EU, where they are particularly high.

This shift away from the precautionary principle will undermine civil society efforts to convince governments to adopt a more preventative approach in the Mercosur countries (Argentina, Brazil, Paraguay, Uruguay). For years, scientists and environmental activists have pressured Argentina to ban glyphosate, which is heavily used in that country’s extensive cultivation of Monsanto’s “Roundup Ready” genetically modified soya. In Brazil, the consumer organization Instituto Brasileiro de Defesa do Consumidor advocates for more effective food safety controls. Currently, pesticide residues as much as ten times the EU limits are allowed by law and even so, frequently exceeded. Peasant organizations in Paraguay are working with the NGO BASE-Investigaciones Sociales to document and prevent pesticide poisonings of schoolchildren from aerial spraying of agrochemicals including paraquat. If the EU-Mercosur SPS chapter were to require food safety standards to adhere to the precautionary principle, civil society could link demands for stronger food safety and pesticide residue rules to an enforceable international agreement. Instead, the chapter relies on weak WTO standards and encourages regulatory cooperation dialogues that will provide a friendly forum for Bayer-owned Monsanto to defend current glyphosate practices. Similarly, global Mercosur meat and food giants including BRF Global and Marfrig and their EU-based subsidiaries will be well-placed to advocate for weak food safety regulations in both the Mercosur and EU.

The EU-Mercosur SPS chapter includes trade facilitation and equivalence provisions that will directly weaken oversight of imported food products and potentially increase risks to consumers. These include (1) a measure to rapidly pre-approve increased meat exports; (2) several provisions reducing the frequency and effectiveness of food safety checks by the importing country; and (3) limiting the authority of governments to preventatively block imports when food safety violations are suspected.

Rapid pre-approval of meat exporting facilities. A focus of the EU-Mercosur FTA is expanding meat exports 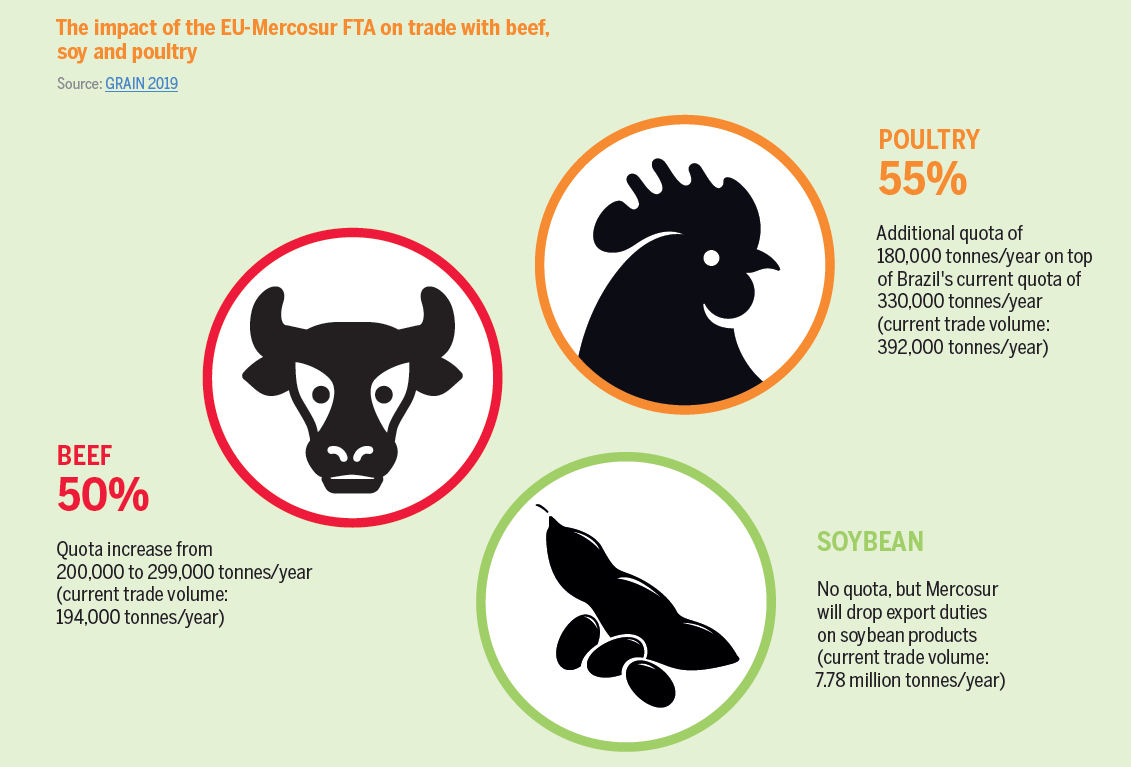 Second, by limiting regulatory checks that could delay or impede this trade, the FTA targets so-called non-tariff barriers. This latter policy is embedded in the SPS chapter, particularly Article 7 “Trade facilitation measures” which provides for rapid approval of animal products destined for export, and limits inspections of exporting meat establishments. Under this article, approval of establishments for the import of animals and animal products “shall be granted without prior inspection of individual establishments by the importing Party once the importing Party has recognized the official control system of the competent authority of the exporting country and has authorised the import of the concerned products and if the exporting Party provides sufficient guarantee that they fulfil the sanitary requirements of the importing Party.” This is a one-time decision made by each Party shortly after the FTA enters into force.

Limiting inspections and preventative measures. While Article 14 of the SPS chapter authorizes emergency government measures to halt imports in cases of “serious human, animal or plant life or health risk,” in general, the agreement does not allow subsequent inspections of meat production and processing establishments if problems surface after the initial authorization and listing of the facility. Moreover, by reducing the frequency of food safety checks by the importing country, and requiring 60 working days advance notice of any non-emergency inspections, the agreement lessens the likelihood that food safety problems will be discovered. Trade policy experts Dr. Luciana Ghiotto of the Universidad Nacional de San Martin and Dr. Javier Echaide of the University of Buenos Aires point out in their comprehensive study, “verification of the official control system is rather permissive” and the extended advance notice of inspections provides extra time to cover up problems by adjusting “any loose end in the control process”. In his analysis of the agreement, independent policy analyst Thomas Fritz explains that a significant consequence of omitting the precautionary principle from the SPS chapter “is that the EU and Mercosur cannot rely on the precautionary principle to preventatively block imports of critical products” such as agricultural goods suspected of being contaminated with pathogens or containing prohibited pesticide residues.

HOW WILL CONSUMERS BE IMPACTED?

The implications of the EU-Mercosur FTA food safety provisions must be evaluated in the context of recent experience with mishandled meat safety in Brazil. In 2017, a meat scandal in Brazil involved food safety inspectors who were bribed to allow exports of tainted meat products — including practices such as adding chemicals to meat to conceal rotting odor, adding pigs’ heads to sausages, and adding cardboard to processed poultry as filler. The scandal led to the temporary closure of export markets with 12 BRF plants banned from selling meat products to the European Union. It is notable that as of October 2019, more than half of the 60 inspectors targeted by the investigation remained on the job. In October 2020, the owner of the world’s largest meatpacker, Brazil-based JBS SA, pleaded guilty in a United States federal court to paying nearly $180 million in bribes to top Brazilian officials in exchange for state-backed financing to expand its operations including export capacity. Provisions in the EU-Mercosur FTA that limit inspections and audits, and provide advance notice to establishments suspected of problems, could make it more difficult to identify and resolve any similar problems should they occur in the future.

The SIA asserts that the EU Mercosur agreement “is expected to induce improvements in SPS [sanitary and phytosanitary] controls and standards across Mercosur countries, while not having an impact across EU member states” (SIA at 159). To support this assertion, the authors point to import audits to ensure food standards are met, failing to mention that the agreement actually limits those audits. The SIA doesn’t explain how food safety controls would improve in Mercosur countries if the agreement goes through. In reality, contaminated food rejected by the EU has been re-exported for consumption within Mercosur countries, rather than standards being lifted up by more trade. The EU-Mercosur trade agreement would not require a different result, continuing a double standard for food safety.

“In 2019, Brazil exported 1,400 tons of poultry meat to the United Kingdom with higher levels of salmonella contamination than allowed by UK law. The poultry meat was returned to Brazil and the Ministry of Agriculture released the shipment for commercial sale in the domestic market, since here the parameters are less demanding and allow consumption with high concentration of salmonella.” Maureen Santos, FASE – Federação de Órgãos para Assistência Social e Educacional (FASE)2

Robust independent systems to check imported food, rather than relying exclusively on an exporting country’s certification, are important to assure the safety of all imported food products. According to a 2020 European Food Safety Authority (EFSA) report analyzing the most current available data (2018), twice as many illegal pesticide residues were found in imported food compared to EU-produced food. While the report did not focus exclusively on Mercosur countries, Brazil was among the countries exporting food with the highest number of different pesticides that have been banned in the EU.

Brazilian analysis confirms high pesticide levels in foods produced for domestic consumption. Of pesticide residue in foods including rice, apples and peppers, out of 9,680 samples collected from 2013 to 2015, some 20% contained pesticide residues that exceeded allowed levels or contained unapproved pesticides. The EU’s Rapid Alert System for Food and Feed 2019 annual report included Brazil and Argentina in its top ten list of the highest number of food safety notifications, Brazil for salmonella in herbs and spices (67 notifications) and Argentina for aflatoxins in nuts, nut products and seeds (63 notifications).

Researchers in Argentina testing 135 of the most widely consumed fruits and vegetables produced for domestic consumption detected pesticides in 65% of the total samples, with 56% of detected residues above the legal maximum residue levels. Oranges, which are a significant export crop, had the highest pesticide concentration detected.

Both European and Mercosur food safety institutions already face challenges in monitoring the safety of food exports and imports. In the EU, budget cuts and hiring freezes are hampering the effectiveness of the government entities overseeing food and chemicals safety. According to the heads of both EFSA and the European Chemicals Agency, this is especially problematic in light of additional responsibilities expected under new chemical policy and Farm to Fork strategies.3 Argentina lacks broad technical capacity to even detect pesticide residues. Consumer advocates in Brazil are highly critical of Anvisa, the National Health Surveillance Agency, saying “Despite the fact that practically 1 in 4 foods that arrive at our tables have irregularities, Anvisa has adopted the attitude of minimizing risks by stating that ‘the foods are safe’ and that “the population is not at risk”. By increasing trade in food and limiting the effectiveness of existing regulatory practices, the EU-Mercosur FTA will add to this oversight gap and could increase consumer exposure to food safety risks.