The Need for Feed: China’s Demand for Industrialized Meat and Its Impacts 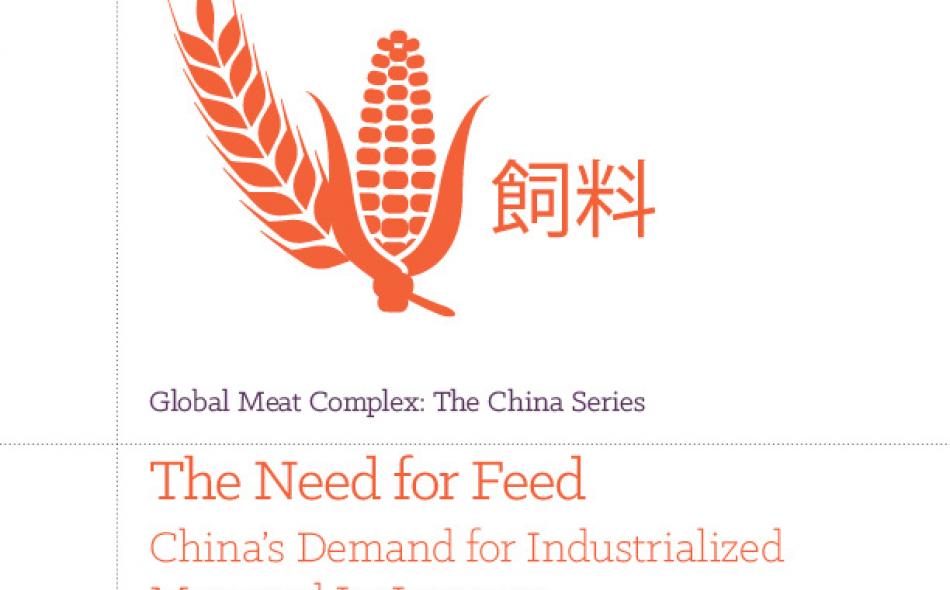 China’s need for feed and the globalized supply chain of the industrial livestock industry is contributing to land use change in China and abroad. It is transforming the government’s approach to grain self-sufficiency, land-based investments abroad and its policies on trade in meat versus feed. The Shuanghui (now called the WH Group) acquisition of Smithfield is an example of one clear way in which global meat companies are responding to and seeking to profit from China’s exploding demand. This paper presents an overview of China’s feed “needs” and its feed sector. It also examines the critical linkage between China and the Americas in procurement of feed and highlights the impacts that a growing Chinese demand for meat (and hence feed) are having in Latin America and increasingly in other parts of the world. How Chinese policy makers address industrial livestock production and situate meat in their definition of food security has and will continue to have a critical impact on global land use, global agricultural trade, rural livelihoods and food security issues.

Water, land and labor shortages make grain production expensive in China relative to the global market. Twelve percent of China’s land is arable. And rapid urbanization has created a massive exodus of rural labor into cities with agriculture now employing 37 percent of the population. These factors create real limits on China’s ability to expand meat production and raise critical questions about the ecological and social tradeoffs involved given that urban Chinese are now consuming much more meat than their rural counterparts.

With increasing food and feed imports, the government and Chinese experts are revisiting their definition of grain self-sufficiency in wheat, rice and corn. Such debates have thus far largely focused on whether China should import meat or feed from a national security point of view, rather than question China’s meat demand and health problems associated with overconsumption.

China liberalized soy for feed production in the 90s. China’s soy imports increased by 253 percent from 03-04 from nearly 17 million tons to nearly 60 million tons (mt) by 2011-2012. The next largest buyer of soy, the EU 27, bought a little less than 12 mt. Brazil and the U.S. alone accounted for 84 percent of total soy exports to China in 2011-2012. While foreign transnationals controlled more than 70 percent of the soy crushing market in the mid-2000s, new laws enacted in 2007 have scaled back foreign control. Foreign TNCs including Wilmar (working with ADM), Cargill, Bunge, Noble and Louis Dreyfus today control less than 40 percent of the soy crushing market in China.

In 2011, China used approximately 70 percent of its total corn production for feed, 20 percent for industrial use and only 5 percent for food. The total global trade in corn is much less than China’s entire corn feed demand. Further consolidation and “modernization” of Chinese livestock farms is only increasing the demand for corn (and other grains such as wheat). Though China has seen phenomenal growth in domestic corn production in the last ten years, corn imports have risen sharply in recent years. The U.S. Grains Council predicts that China will incur a deficit of 19-32 million tons of corn by 2022. Thirty-two million is nearly a third of the entire world trade in corn today. This has huge implications for the world price of corn. China has also begun importing dried distillers grains (DDGs), primarily from the U.S. and grains such as barley, wheat and sorghum for feed from several countries. Unlike soy, however, where TNCs are deeply embedded, Chinese domestic agribusiness firms like the New Hope Group are poised to become the key corn traders.

Eight Chinese companies are listed in the top 20 feed companies worldwide (by volume). Already in 2010, 16 companies were producing 33 percent of total feed in China--each with an individual output greater than one million tons annually. The high return on investment combined with thin margins incentivizes these companies to vertically integrate into other parts of the livestock supply chain for greater profit margins.

In 2008, China’s state planning agency issued a directive that sought direct investment in Brazil and other countries. The “going out” was part of a broader national security strategy to diversify sources of imports from different countries for food generally, but particularly for feed and meat. Chinese private companies are indeed “going out” to source feed and fodder in Africa, Southeast Asia and Eastern Europe. Though, Latin America still remains one of the primary regions of interest and investment—particularly for soy. Chinese state-owned and private companies are investing directly in Brazil’s soy supply chain, competing with the oligopolistic might of foreign transnational corporations through direct access to soy and by mimicking their methods of vertical and horizontal integration of the commodity chain including through contracts and storage.

Producing “cheap” feed grains has come at a great ecological and social cost in Latin America. Twenty-seven million hectares of Brazilian land are being used to cultivate soy (large tracts of it forest, previously). Efforts to reduce deforestation rates in the Amazon have resulted in the intensification of soy production, 75 percent of which is GM--further increasing pesticide and herbicide use, flowing into major tributaries of the Amazon. As in Brazil, the soy boom in Argentina has also led to land use change and land and environmental conflicts (almost all Argentine whole soy exports go to China) associated with widespread use of GM crops, herbicides and toxic chemicals.

Sky-rocketing meat production has already changed the grain production landscape in China as well. Many soy farmers have switched to planting corn as they have not been able to compete with much cheaper U.S. and Brazilian soy. The government has invested in the intensification of corn--largely for feed needs, but also for manufacturing. The intensification has brought about monoculture plantations, rapidly declining biodiversity and like Argentina, increased use of strong agro-chemicals and hybrid seeds. From 1998-2003, a massive shift occurred from the traditional grain producing areas of central, south and east regions to the north and northeast. High yields have resulted in high degrees of environmental stress including high levels of soil salinity and acute water shortages. In addition, the shift northward to fragile ecosystems that are even more water-scarce may actually add to challenges. Grain is therefore ironically migrating to areas that are even more susceptible to environmental degradation.

China’s agriculture policy makers face a number of challenges: There is a growing demand for meat aided by the government’s prioritization for abundant and cheap meat (see IATP’s China’s Pork Miracle? Agribusiness and Development in China’s Pork Industry for a detailed analysis) and grain self-sufficiency; while the government tries to raise rural living standards even as rural labor migrates to cities and agriculture faces ever more degraded and scarce land and water resources. Which issues should take priority, and how can competing goals be balanced? Increasingly intransigent environmental, health and food safety problems associated with the livestock industry are beginning to make some Chinese experts, government authorities and consumers question the current approach to meat production and consumption. The debate has thus far largely centered on whether to import feed or meat. (Though some are also beginning to raise critical questions about China’s seemingly unquenchable appetite for meat, its massive industrialization and whether, in fact, China has reached “peak meat.”)

Proponents of meat imports believe that livestock imports will alleviate China’s livestock-related environmental, health and food safety problems--thereby externalizing its worse effects. While other Chinese experts believe quite the opposite. They, along with other foreign experts, believe that if China started depending on the world market for meat imports—it would be hard-pressed to find the supply and thus encourage feed imports to support the large investments that have established the Chinese meat industry. On the other hand, state-led support for large scale meat production over the last two decades has created a powerful and increasingly globalized domestic constituency of companies vested in the supply chain (meat processing, feed, vaccines) and financiers—creating strong incentives to import both “cheap” meat and feed and/or exporting them--depending on the bottom line and agreements between them and other global entities along the supply chain.

While the FAO, the OECD and other investment banks take the appetite for industrial meat for granted—much of it projected to come from China and India--they fail to address the natural resource intensive, climatic, social and public health impacts of this unquestioned appetite in OECD countries (which still far exceed all healthy norms of meat consumption) and in developing countries. This paper shows the evolution of China’s feed-related supply chain and the policies that have helped shape it. It demonstrates the increasingly global and domestic impacts of this evolution and the domestic challenges this forces on China: How much more meat production and consumption? By and for Whom? What production model? The paper has tried to provide a picture of the ecological and social challenges that Chinese and policy makers in exporting countries must confront in order to assess the future direction and model of industrial meat production, distribution and consumption. It is hoped that the findings and analysis in this report help catalyze a more holistic debate about these deliberate policy choices.