The COVID-19 pandemic has exposed the limits of highly interconnected economies and societies with few guarantees for the human rights to food, health, or development. Disillusionment with growing inequality and scarce jobs has spurred reactionary politics and divided societies. Yet, what exists in 2020 does not have to be our future. It is imperative to establish processes and governance structures, which make it possible to rebuild connections among people and restart sustainable development efforts that contribute to human rights and a just transition to a low-carbon economy.

The EU-Mercosur trade agreement is designed to lock in a particular set of rules written to facilitate free flows of goods, services, and investments among countries with the least possible regulatory “friction”. Among those rules are new provisions on government procurement and services, which would empower corporations to bid on publicly funded programs without any requirement that they purchase from local farmers, hire local workers or otherwise contribute to local development. Brazilian analyst Adhemar Mineiro adds that the agreement also paves the way to bind states and municipalities – which make up 65 percent of GDP – to those rules, thus affecting their capacity to develop public policies geared for local development.

Procurement contracts can cover a broad range of public spending on many kinds of goods and services, from massive roads, transit, renewable energy, and construction projects to much smaller farm-to-school programs or university cleaning service contracts. Since it is taxpayer-funded spending, these programs often have conditions designed to benefit local economic activity. In the case of farm to-school programs in many countries, for example, preferences are given for healthy, locally grown foods, benefitting both farmers and students. Most often, this kind of preference will be one of several criteria (including cost) used to judge the best value of a given bid for the community, but this public spending is often directed to improving the public good. Small business and minority set-asides (which allocate a certain percentage of procurement contracts to those groups) can help to address past injustices and level the playing field such that these firms can effectively compete with much larger corporations.

Brazil’s National School Meal Program requires that at least 30 percent of food used in the program is produced by local family farmers. The Food Procurement Program (Programa de Aquisição de Alimentos, PAA), which was established as part of the national Zero Hunger program, provides for purchases of food and seeds from family farmers, which are then used in social programs and to create public food stocks. Each farm can sell a maximum of BRL 20,000 (approximately € 3,200). This is a hugely important program: in Brazil, family farming represents 74% of rural jobs and 33.2% of the agricultural GDP.

Brazilian social movements are working to restore the program after a 93% reduction in funding in recent years. In April 2020, 877 civil society organizations called on the government to increase PAA spending to BRL 1 billion (approximately € 157 million) in light of the COVID emergency, and to restore its guidance under the participatory National Council for Food and Nutrition Security (CONSEA, which Bolsonaro abolished in 2019). While some emergency funding was approved, the longer struggle to rebuild these important and popular programs continues. Argentina’s school lunch program, while less ambitious than that in Brazil, could also be expanded in the future as resources become available.

As in many countries, Brazilian women are at the center of family farming and food systems. The PAA public food purchasing and distribution program prioritizes women’s participation. As of 2019, they were a majority of participants in every category of socially disadvantaged farmer included in the program: 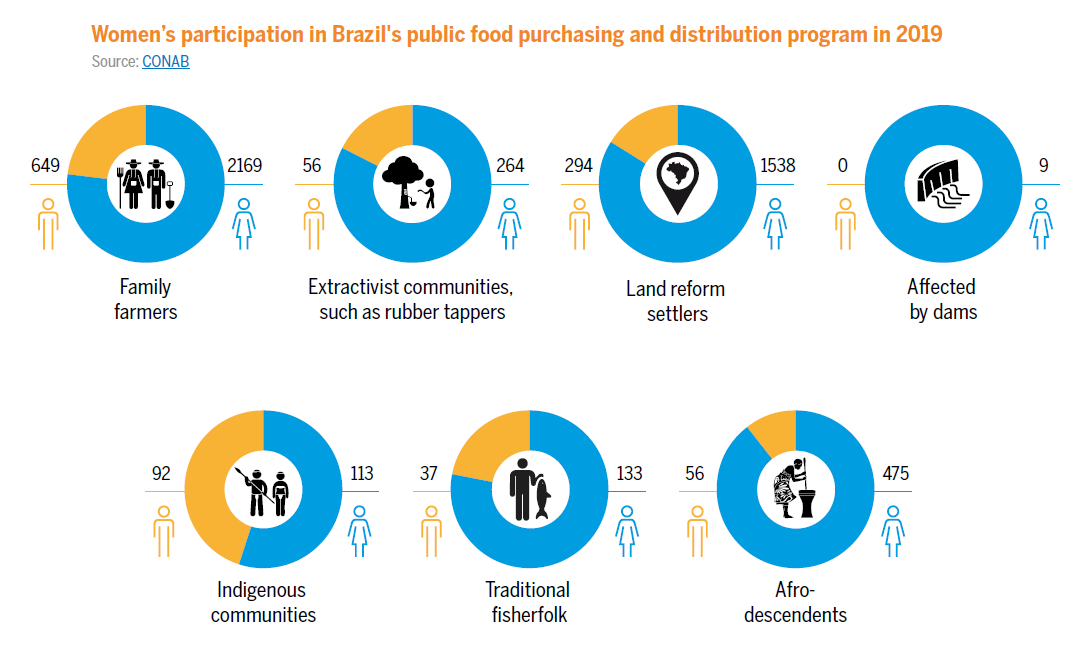 Unfortunately, this success has left them vulnerable to the impacts of massive cuts in funding in recent years. Those cuts have affected who can participate as well as what kinds of foods can reach the population. Silvio Porto, the former director of the public National Supply Corporation (Companhia Nacional de Abastecimento, CONAB), added that, "Without an integrated policy for the purchase, distribution and management of public stocks, organic food does not reach the population - and the money does not reach the field…The urgency of hunger came even before the pandemic and, with it, the problem only got worse.” Brazilian social movements and NGOs are pushing hard to maintain the PAA, in the hopes that a future administration can restore this important public procurement program.

Public procurement can be even more important in other sectors. In an analysis of the agreement, Luciana Ghiotto and Javier Echaide note that the Argentine Ministry of Health already buys 54 percent of medicines from transnational corporations, compared to 40 percent from local companies. Procurement rules in the EU-Mercosur agreement requiring National Treatment – that European companies must be treated at least as well as local companies in bids – could further advantage transnational corporations. They note that procurement commitments could also affect university cafeterias throughout the Mercosur countries, where local authorities often give preferences to small and locally based businesses. Overall spending is even greater for airports, roads, and construction projects, where the general opening of public procurement bidding will tend to favor larger companies more accustomed to navigating those complex rules.

Article 2(t) of the chapter on Government Procurement explains what in trade terms are called “offsets,” which it defines as, “measures used to encourage local development or improve the balance-of-payments accounts by means of domestic content, licensing of technology, investment requirements, counter-trade or similar requirements.” Article 11 goes on to establish that, “With regard to covered procurement, a Party shall not seek, take account of, impose or enforce offsets.” Exactly which sectors or agencies each government will commit under the agreement will be listed in annexes to the Government Procurement chapter. Those annexes have not yet been published, but the EU’s goal is broad coverage. Article 28 includes a commitment to share information on possible increased access to each other’s procurement markets for micro and small businesses, but there is no language in the text that would ensure that national or local governments could give bidding preferences for small or minority owned businesses or those that commit to hire local people. In fact, the proposed language in Articles 2(t) and 11 would prohibit those kinds of choices.

The published text includes general exceptions allowing for measures “necessary to protect human, animal, or plant life or
health including environmental measures,” but it is not clear what would constitute a “necessary” measure as opposed to one that emerges in response to democratic pressures to rebuild local economies and transition to climate justice.

Estimates of the size of the Brazilian procurement market alone range from $ 200 to $ 300 billion, as much as 20% of the country’s GDP. The situation in Argentina and Uruguay is similar, with smaller government procurement operations in Paraguay. Public procurement is not included in the World Trade Organization, although 20 parties (including the 28 Member States of the European Union) are members of the plurilateral Government Procurement Agreement (GPA). Brazil has recently indicated that it is exploring joining the GPA, almost certainly along the lines negotiated in the EU-Mercosur agreement. No other Mercosur country has previously included procurement commitments in a trade agreement, except for an agreement reached between Brazil and Peru in 2016. Commenting on the EU-Mercosur deal, Ghiotto and Echaide conclude that,

The provisions in the Public Procurement chapter put an end to the possibility of the national or provincial states developing specific public policies that foster and benefit local economies. This could prevent the generation of public or even private employment based on contracts with the state. As with the lowering of tariffs for industrial products, the agreement´s provisions concerning Public Procurement as they stand will likely lead to a weakening of local and regional value chains, while increasing the dependence on transnational corporations for public provision, such as the construction of roads. Beyond this concern, the chapter also does not provide any mention of preferential treatment for companies with high social and ecological standards, thus making no effort to incentivize responsible corporate practice.

There are numerous references in the Government Procurement chapter to Annexes that would define which specific sectors are included, and which levels of government. Those annexes are not publicly available. In previous free trade agreements such as the Comprehensive Economic and Trade Agreement (CETA) and in the negotiations for a Transatlantic Trade and Investment Partnership, the EU insisted on broad coverage for all goods all levels of government. Canadian analysts Scott Sinclair and Hadrian Mertins-Kirkwood explain that,

Under CETA, a wide range of Canadian sub-central entities will now be prohibited from favouring local suppliers or applying local content requirements to procurement contracts — both important economic development tools currently available to many governments. CETA not only guarantees non-discriminatory but unconditional access to the Canadian procurement market for EU companies. Under CETA, Canadian procuring entities cannot obligate EU suppliers to contribute positively to local economic development — even if such contract conditions apply equally to Canadian and EU companies.

A future administration in any of the Mercosur countries (or EU Member States) could decide to take a different approach to economic policy than they do now. Any of them might decide to establish a public works program to increase local employment or strengthen local businesses producing solar or wind panels for schools or other public institutions. A new Brazilian administration might decide to expand its public procurement programs that prioritize purchases from small scale farmers for community restaurants or schools.  They might decide to initiate some kind of ambitious and completely new climate transition program. Those decisions must be made democratically within each nation.

While too much is still unknown about the exact commitments under the EU-Mercosur agreement, there is a real danger that it would permanently lock-in decisions and preclude rules to favor the rights to food, employment and a healthy environment. Any sector included in such an agreement could be subject to trade complaints resulting huge fines or other trade retaliation and would in any case create enormous pressures to just open them up to multinational corporations to remain compliant with the trade agreement. No agreement should cut off the role of the state in ensuring that public funds are spent to benefit local economies.

Luciana Ghiotto and Javier Echaide, Analysis of the agreement between the European Union and the Mercosur, The Greens/EFA and PowerShift, 2020, p. 91-96.

Adhemar Mineiro, The Mercosur-EU Agreement and its main problems to Brazil, in http://rebrip.org.br/publicacoes/the-mercosur-eu-agreement-and-its-main-problems-to-brazi-014c/, p. 14.