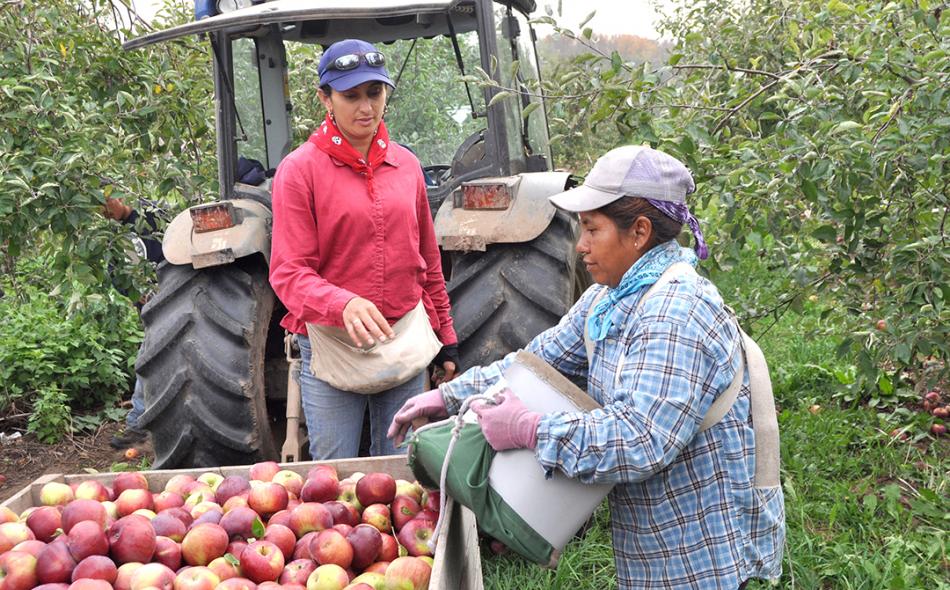 As a result of massive transformations in the agricultural sector including around technology, finance and marketing, the nature of farming itself has been changing, impacting all farmers — white, black and minority. Data from the Census of Agriculture helps to understand how these have factors impacted distinct ethnic and racial groups and genders.1 However, for a complete picture, such information needs to be complemented with qualitative data.

An analysis of data from the 2012 USDA Census of Agriculture, the 2014 Tenure and Ownership Agricultural Land survey and the 2013–2014 National Agricultural Worker Survey showed that:

From 2012 to 2014, white people comprised over 97% of non-farming landowners, 96% of owner-operators, and 86% of tenant operators. They also generated 98% of all farm-related income from land ownership and 97% of the income that comes from operating farms. On the other hand, farmers of color (Black, Asian, Native American, Pacific Islander, and those reporting more than one race) comprised less than 3% of non-farming landowners and less than 4% of owner-operators. They were more likely to be tenants than owners; they also owned less land and smaller farms and generated less wealth from farming than their white counterparts.2

An initial analysis of data from 2017 census, shows that in 2017, 95.3% of the 3,540,690 farm-operators in the United States self-identified as white. Of these, only 1,473,011 of them identified farming as their primary occupation.3 A U.S. Government Accountability Office (GAO) analysis has also shown that Socially Disadvantaged, Farmers and Ranchers (SDFRs), including women, accounted for 41% of all producers, operated 21% of all acres and produced 13% of the total market value of production; in fact, 30% of them were owner-operators.4

Of these SDFRs 88.3% were women of any race, 8.1% were Hispanic, 4.2% were American Indian or Alaska Native, 3.3% were Black or African American and 1.6% were of Asian descent. In 2017, 30% of all farms were SDFR farms — meaning a SDFR was the principal operator. On average, SDFR farms were smaller and brought in less revenue than non-SDFR farms in 2017.5

When these are compared with data based on USDA-NASS Census 2012, it appears that other minority farmers — American Indians or Native Americans, Asians, native Hawaiian or other Pacific Islanders — are taking up farming. But at the same time, the share of African American farmers in the farming pool seems to have shrunk a little in this period. This is not surprising if we are to look at the history of the African American experience of farming. 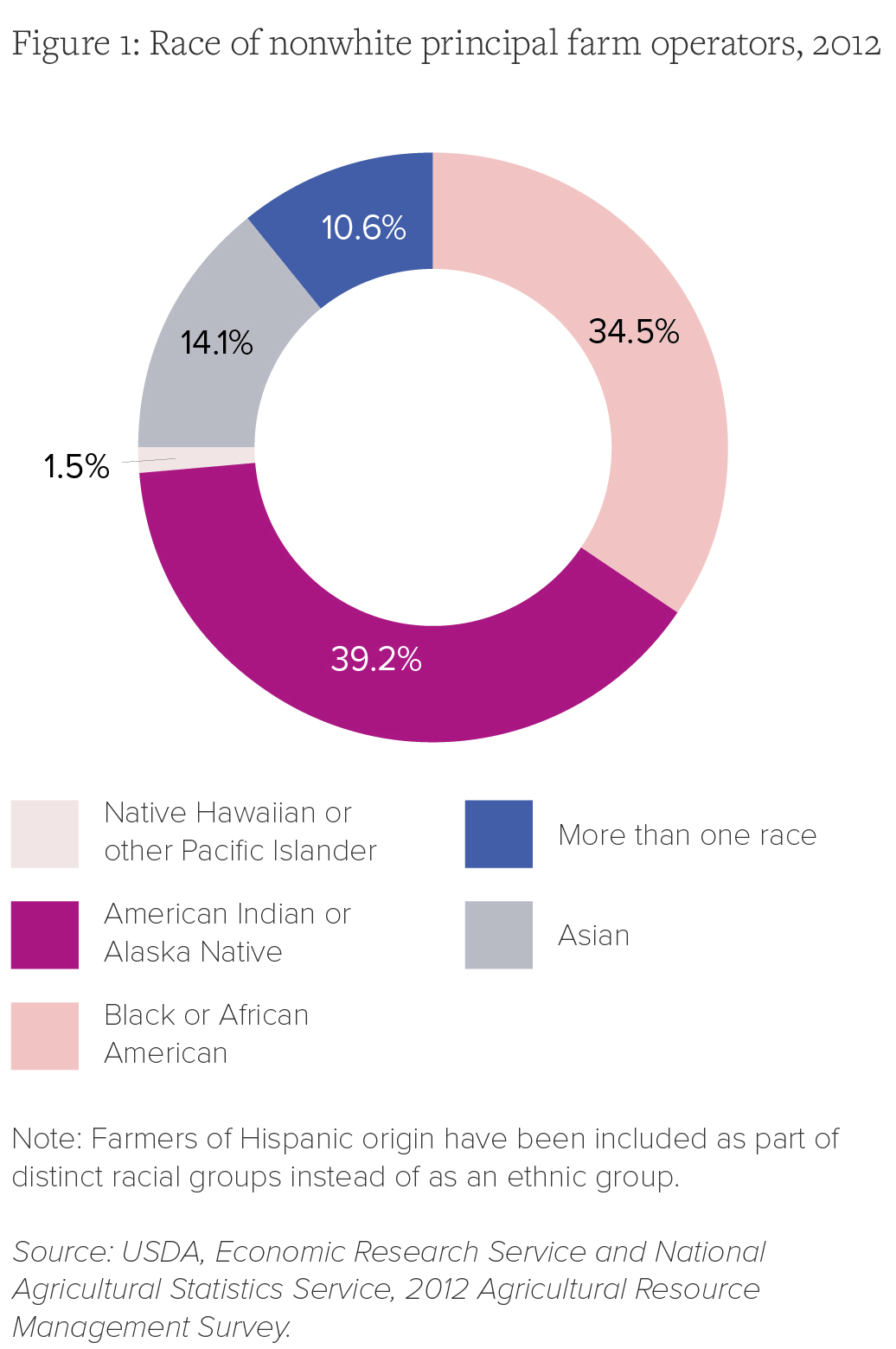 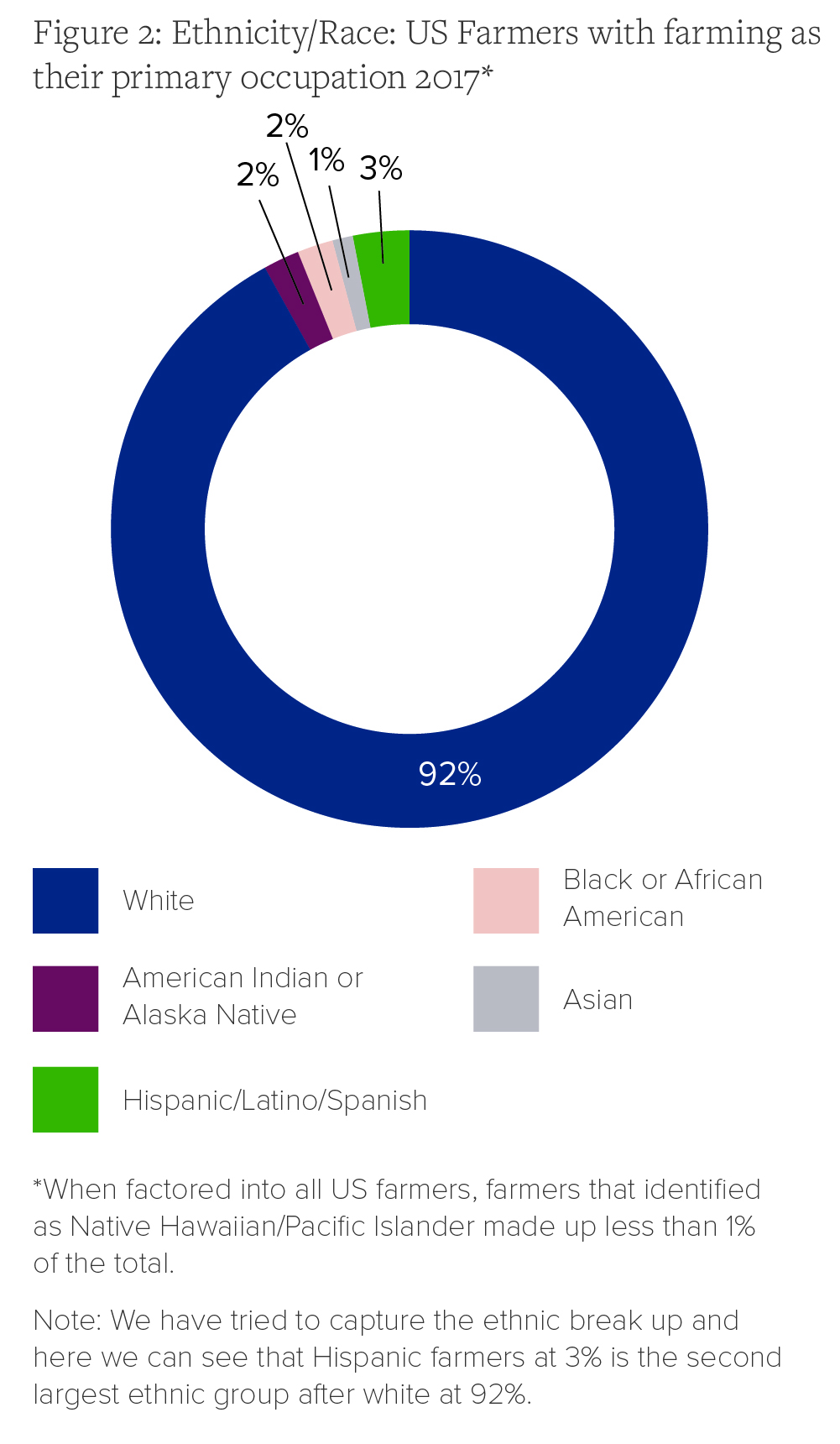 This experience of historical trauma also results in distrust of the institutions and systems in place to help deal with discrimination, as has been elaborated by Cassandra Johnson Gaither in “Have not our weary feet come to the place for which our fathers sighed?: Heirs’ property in the Southern United States.” An example is how many African American farmers are reluctant to engage with and/or are unfamiliar with the legal institutions, leading to a prevalence of “heirs’ property,” a situation in which the owner-operator dies without making a will. The law stipulates that the property will go to all heirs and not simply to the children of the owner-operator. Land grabbers would then proceed to convince one of the heirs to sell his or her share and then proceed to force other heirs out, as they would lack the wherewithal — cash, influence, legal knowledge, alternatives — to keep the land. This was one of the main ways African Americans were dispossessed of their lands, as well as through violence. Also, such “heirs’ property” could not be used as a collateral, nor could the heirs access credit or other services if they were operating an heirs’ property.8

These experiences were compounded by systematic discrimination over decades when it came to accessing farm loans and assistance. This paved the way for two cases brought against USDA by African American farmers: Pigford v. Glickman and Brewington v. Glickman.9 Latino, Native American and women farmers raised similar cases against USDA.10 The decision in favor of the farmers in the Pigford case began redressing the systemic race-based discrimination by the USDA. Unfortunately, many of these discriminatory practices continue through to the present and impact African American farmers in specific ways even today.11

The 2018 Farm Bill addresses some barriers faced by African Americans such as the “heirs’ property” issue.12 While the new changes (such as enabling access to USDA programs and disaster relief) would address some of these challenges, especially in the 13 states and U.S. Virgin Islands where Uniform Partition of Heirs Property Act (UPHPA) has been enacted, it will be a long while before the impacts of these efforts show real change.13

The original Crisis by Design looked at how the crisis impacts family farms differentiated primarily in terms of farm size; the overall focus was on how farms and farming families were being impacted by the changes in the farm policies. Part of the gap in Crisis by Design could be due to the different priorities of that time, and part of it due to the lack of detailed data at the time. Also, since the publication of Crisis by Design, academics have helped throw light on the blind spots in mainstream data gathering. It is now possible to take an intersectional analytic approach with gender/race/ethnicity, rather than examining each issue exclusively.

Gender based disparities in agriculture were just beginning to be visible around the time Crisis by Design was written. The 1984 Farm and Ranch Irrigation Survey reported that by 1982, there were 120,000 farms operated by women, representing 5% of total number of farms; of this, about one-third were operated by women over 65 years old.14 By 2017, among those whose primary occupation is farming, the number of women had risen to 21.8%. Over the last 40 plus years, one thing seems to be constant: women over the age of 65 constitute one-third of the women farmers. But in addition, just as in the case of all farmers, well over 90% of women farmers self-identify as white. Given this, we could safely conclude that Socially Disadvantaged, Farmers and Ranchers (SDFRs), (that is excluding women self-identifying as white), would be at the most 10% of all producers. This could be part of a more in-depth analysis of the 2017 USDA Census of Agriculture.

Other questions that a more thorough analysis that goes beyond the census data could ask include: what is the impact of these agricultural and food policies on other actors in the food system, such as the immigrant workers who come seasonally or those working in food processing plants and retail sector? What are the impacts on those engaged in fishing? What impacts have these policies had on Native American food systems? In fact, we have not explored the specificity of Native American food producers (whose lands have been acquired forcefully and has formed the foundation of our U.S. economy, let alone U.S. agriculture and food system), and it remains a major lacuna in this short piece.