What does the occupation of Wall Street have to do with agriculture? 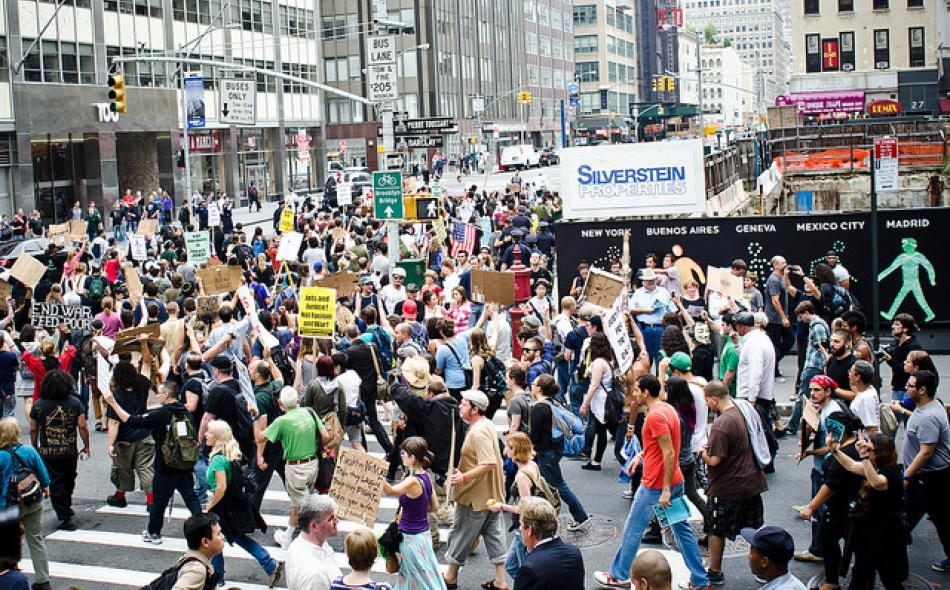 The occupation of Wall Street protests originated from a July call to action by Adbusters to oppose growing corporate control over democracy and government.

Used under creative commons license from marniejoyce
Now two weeks in, the occupation of Wall Street originated from a July call to action by Adbusters to draw a line in the sand on the growing corporate control of our democracy and government—and in particular, Wall Street’s influence.
Agriculture markets have been especially hard hit by Wall Street’s political prowess. Wall Street deregulation has not only made the stock market extremely volatile, it has increased prices and price volatility in agricultural markets. The cost of protecting against price volatility are considerable for the future of agriculture not only in the U.S., but around the world.
In 2008, we reported on the role a new wave of financial speculators, operating through commodity index funds controlled by Wall Street firms like Goldman Sachs, played in creating extreme volatility in agriculture commodity markets—and ultimately contributing to rising global rates of hunger. Wall Street speculators were able to enter commodity futures markets after a successful and systematic decade-long lobbying effort to dismantle strong market safeguards. According to Wall Street Watch, from 1998–2008, Wall Street invested over $5 billion in lobbying and campaign contributions in support of their deregulatory agenda.
In the last two years, IATP and many others have worked to overcome a huge lobbying surge by Wall Street (President Obama had to actually beg Wall Street to call off the dogs) opposing efforts to effectively regulate commodity futures exchanges within the Dodd-Frank Financial Reform Bill. That fight continues as Wall Street is expending enormous amounts of money to influence the rule-making process at the Commodity Futures Trading Commission (CFTC) and the Security Exchange Commission (Goldman Sachs alone spent $1.08 million in lobbying agencies last quarter). And unfortunately, according to Reuters, Wall Street is making headway by watering down proposals for new position limits set by the CFTC, which regulate the amount of futures contracts any one entity can hold at any one time.

Wall Street aside, it’s nearly impossible to find a legislative or regulatory issue related to food and agriculture that hasn’t been deeply shaped (if not outright written) by corporate lobbyists. Adbusters called for a Presidential Commission to end the influence of corporate money in Washington. That would be step in the right direction for those who care about agriculture and our food system. If Washington won’t step up to the plate, the stakes will only get higher.