Critical issues in agriculture discussed during the climate change negotiations 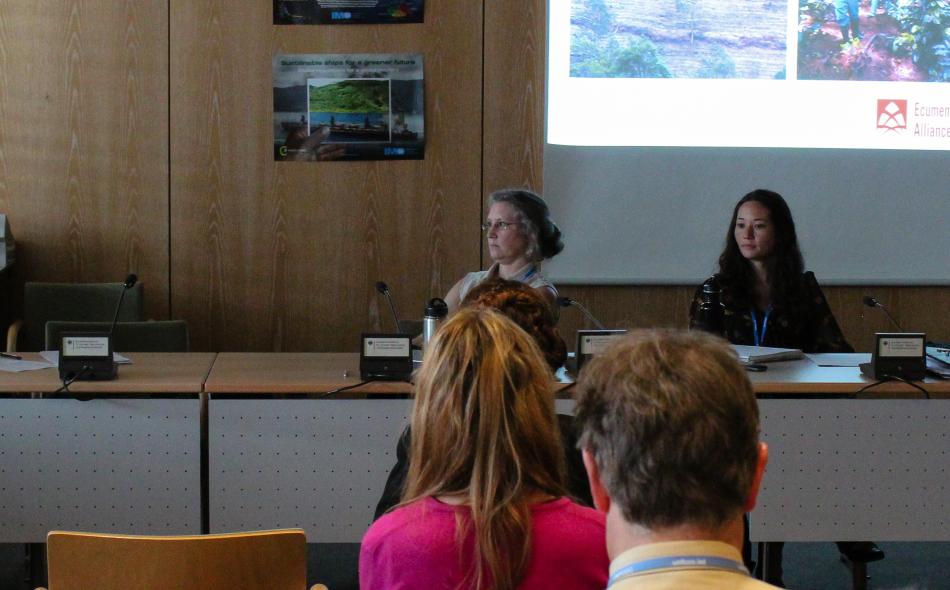 Heated debates on equity of burden sharing and finance dominated much of the discussions at the UNFCCC negotiation in Bonn Germany. Within this broader debate, there is growing recognition of the urgent need to find new solutions to the challenges of agriculture and food security in the face of abrupt and violent climate events and slow-onset events, such as extended drought. IATP, ActionAid and the Ecumenical Advocacy Alliance presented information at a side event on the scope of the challenges, and proposed work on agriculture that could be undertaken by UNFCCC. In the discussions on agriculture in the Subsidiary Body on Scientific and Technological Advice (SBSTA), developing countries have repeatedly insisted that their priority is adaptation to climate change, particularly for agriculture.

ActionAid’s Harjeet Singh began by noting that in 2011 there were about  500 major weather events globally compared to an average of 120 a year during the 1980s. If the emphasis in work on agriculture under the UNFCCC becomes reducing greenhouse gases in agricultural activities of developing countries, as proposed by developed countries and the World Bank, climate risk and food insecurity will increase. Rather than using agriculture to create emissions offset credits for sale to developed countries, Parties should agree on how to adapt agriculture to climate change and invest accordingly.

For example, Harjeet said, the SBSTA could provide useful input in assessing risk exposure and agricultural biodiversity practices that are working for developing countries; it can assess overall community adaptation models, identifying best soil management practices. The SBSTA could document traditional agricultural knowledge and investigate how it can work with agricultural science and how both can be communicated through community communication systems. Ninety percent of developing country National Adaptation Plans of Action (NAPAs) focus on agriculture. Those NAPAs need the technical and financial support of developed country Parties. Agriculture can be also aided through the establishment of a loss and damage mechanism under the Subsidiary Body on Implementation. In sum, Harjeet said there was much needed work on agriculture to be done under the Convention.

Doreen said that the World Bank’s program to pay small scale producers to produce carbon emissions offset credits suffered from a number of shortcomings. First, there would only be demand for the credits once developed countries adopt emissions caps demanding much greater and mandatory emissions reductions than the voluntary “pledge and review” cuts of the Copenhagen Accord. There is a severe lack of mitigation ambition among developed countries, especially the United States, whose Copenhagen pledge would result in just a 4 percent emissions cut from the 1990 baseline of the Kyoto Protocol, to which the U.S. is not committed.

Even if there were sufficient demand for the offset credits, the environmental integrity of the credits is suspect because of the non-permanence of soil carbon sequestration. Lack of permanence results in heavily discounted credits, valued now at approximately 1.5 Euros per metric ton of carbon dioxide emissions, and miniscule payments to farmers for their work. Despite these market and environmental integrity problems, the Bank is selling a future market to developing countries in its “carbon-readiness” program.  Instead the “readiness funds” need to be directed to financing adaptation pathways.

Christine Campeau of the Ecumenical Advocacy Alliance (EAA) discussed the role of agroecology in realizing agricultural adaptation and food security. EAA members the United Church of Canada and Canadian Foodgrains Bank, for example, work with African partners to rebuild depleted soil, a fundamental building block of agricultural adaptation. The UN Environment Program is assessing the EAA’s partners’ performance in Kenya, Tanzania, Ethiopia, Burkina Faso and Niger to determine how best to scale up the agroecological techniques used in the project.

There is an urgent need to strengthen farmer-to-farmer networks, so that different agroecological practices could be shared among farmers. Farmer field schools would bring together agricultural scientists, traditional knowledge practitioners and agricultural producers to share what they know and learn new practices. Successful adaptation requires government support for traditional seed systems to conserve and extend agricultural biodiversity with climate adapted traditional crops.  Developing local markets was important to adaptation, to reduce dependence on imported crops with their high and volatile prices.

In the discussion that followed, several participants raised a central problem with these sensible approaches – they don’t make money for the corporate interests promoting patented seeds and chemical inputs. One African observer commented that politically agroecology is not “truly digestible” because it doesn’t make money for those businesses. Others noted the growing evidence of agroecology’s potential to increase sustainable production and farmers’ incomes, as well as to reduce the loss and damage to the natural resource base caused by input-intensive agriculture.

This debate on the right kind of agriculture is emerging in multiple forums—at the UNFCCC, at Rio+20, and at the Committee on World Food Security. Fair and balanced solutions that respond to the specific situations of farmers, their communities and their natural environments in the South and North should be the central focus of those talks.