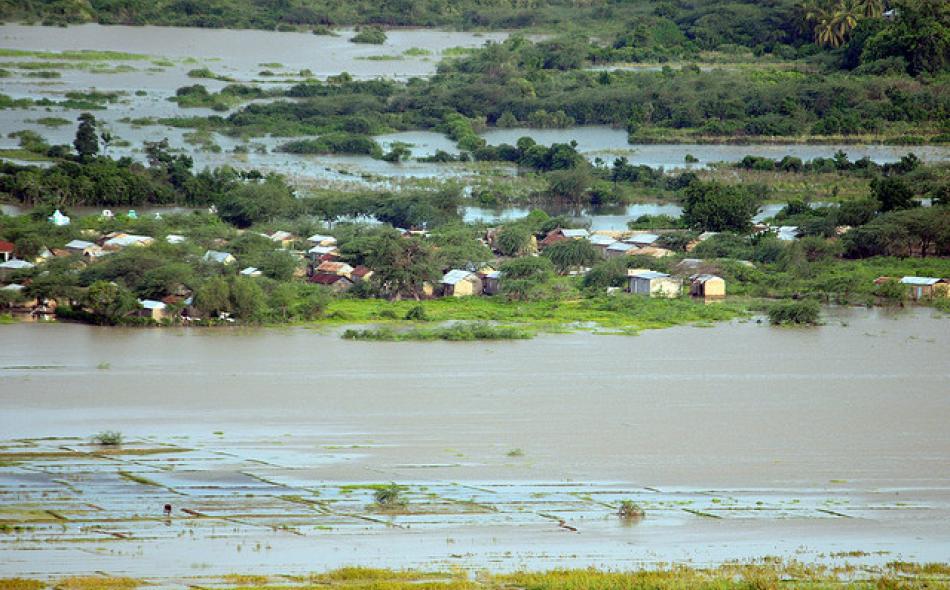 The damage from Hurricane Isaac was so severe, it is estimated that the agriculture sector in Haiti suffered $2,420 million in losses.

Guest blogger Sarah Leavitt is the digital outreach manager of the Lambi Fund of Haiti.

It’s a common scene in Haiti: Marceline, a small farmer, walks into a bustling market to sell her harvest and the marketplace is riddled with imported goods.  Fruits and vegetables are from the Dominican Republic, packaged goods from the U.S. line the rows and large bags of rice stamped with USAID lay on the ground. To an unknowing eye, this wouldn’t mean much, but to Marceline these imported goods are undercutting her and other Haitian farmers’ ability to make an honest living.

In Haiti, the idea of food sovereignty means so much more than growing food that is healthy, culturally appropriate and produced through ecologically sound and sustainable methods (as defined by the International Planning Committee for Food Sovereignty). For the more than half of Haitian society that depends on agriculture for its livelihood, an agriculture system that that supports locally grown foods is imperative.

The struggle to protect and strengthen local agriculture is nothing new to Haiti. Severe environmental degradation and years of deforestation have eroded the soil and left much of the land devoid of the nutrients essential to producing high yielding crops. This, coupled with Haiti’s propensity for natural disasters, like hurricanes, leaves small farmers especially vulnerable to fluctuations in the environment.

Take Hurricane Isaac for example. Heavy rains came and quickly washed away topsoil no longer anchored down by the roots of trees, leading to the destruction of many crops and livestock. The damage was so severe, it is estimated that the agriculture sector suffered $2,420 million in losses (Caribbean Journal 2012). This susceptibility to crop loss makes relying on agriculture in Haiti a difficult endeavor. For small Haitian farmers like Marceline, losing crops to a hurricane is devastating. Selling goods from a harvest in the market is now out of the question and the need to feed her children, send them to school and eke out an existence becomes a herculean feat.

If the seemingly ever-present threats of the environment were not enough, small farmers continually face ramifications of unfair trade policies that promote the incessant dumping of food aid and cripple local markets.

The most well-known example of this is the infamous U.S. rice programs that destroyed Haiti’s rice production in the mid 1990s. The Clinton Administration negotiated an agreement with the Haitian government that dramatically cut tariffs on imported U.S. rice, which became cheaper than Haitian rice. As a consequence, the floor dropped out from beneath Haitian rice growers. As Clinton explains it, "It may have been good for some of my farmers in Arkansas, but it has not worked. It was a mistake." Clinton told the Senate Foreign Relations Committee in March of 2010, "I had to live everyday with the consequences of the loss of capacity to produce a rice crop in Haiti to feed those people because of what I did; nobody else."

Then again in May 2010, on the heels of the earthquake, when communities were still reeling from the devastation and loss of life—farmers’ crops were attacked yet again. Monsanto announced the donation of $4 million dollars' worth of hybrid corn and vegetable seeds. Much like Clinton’s rice subsidy policies that were at the time touted as providing Haitians with a cheap and affordable source of food, this donation was given under the veil of benevolence to help farmers who “may not have had sufficient seeds to plant” (Monsanto 2010), an assumption without merit.

Monsanto’s actions were harmful for a couple of reasons.  First, the seeds came coated in toxic fungicides and require significantly more water, chemical fertilizers and pesticides than local Creole heirloom and organic seeds.  In addition, these hybrid seeds cannot be saved and re-planted, so farmers who use them must purchase new seeds for planting each year.

Small farmers saw this ruse for what it was—a move by Monsanto to create agricultural dependency in Haiti. The peasant farmer leader Chavannes Jean-Baptiste of the Peasant Movement of Papay (MPP) called this donation, “a new earthquake [for Haiti]” and “a very strong attack on small agriculture, on farmers, on biodiversity, on Creole seeds…and on what is left of our environment in Haiti.”  Local peasant farmer movements were so opposed to this attack on food sovereignty that they committed to burning Monsanto’s seeds upon arrival. Undoubtedly, not all of the seeds were destroyed and thousands of Haitians were distributed these seeds unaware of the long-term risks and impending dependency—all of which impoverished farmers simply cannot afford. (Read more about the continued impacts of Monsanto’s influence in Haiti.)

In spite of these egregious threats from the U.S. and international corporations, small communities throughout Haiti are uniting to strengthen local food production, protect the environment and promote Creole seed and food storage.

One such example is the Youth Association of Sél (AJS) who are partnering with the Lambi Fund of Haiti to build a grain storage facility and to launch a community credit fund in their community. The organization is building a grain silo to store surplus grains and seeds for use in times of need—droughts, natural disasters and between growing seasons. The storage facility will also be a place to store local Creole seeds. With this silo, AJS members are working to increase access to high quality, local seeds that they can share and sell to one another at an affordable rate.

AJS, a youth organization comprised of 255 members (120 women) is a young and vibrant group that realizes the importance of fighting for and promoting food sovereignty in its community.  In order to increase their capacity, members attended workshops administered by Lambi Fund on grain storage management and operation, bookkeeping, the issuing of loans and how to manage a community credit fund.

To date, 50 low-interest loans have been issued to members who are using the funds to purchase more seeds, tools and organic fertilizers for growing more peanuts, peas and corn in the area.  One recipient noted that investments from the loan allowed him to cultivate 25 percent more land. All of these loans were repaid on time, and since AJS manages the credit fund and interest earnings stay within the community, the fund is growing.  As a result, AJS members are planning toHaitis issue an additional 19 loans this fall to farmers in preparation for the upcoming planting season.  The silo is currently under construction and committees have been formed that will be responsible for managing the food storage unit and distributing the grains and seeds in an equitable manner.

While members of AJS may be young, each of these members is not naïve to the difficulties of farming in Haiti. Hurricanes, droughts, a degraded environment, unfair trade policies and corporate influences make growing food and earning a fair income markedly difficult, yet members of AJS and countless other Haitians living in rural Haiti realize the importance of standing in unity and working together toward a food secure Haiti. Cooperatives and community organizations much like AJS are working together to promote food storage, seed sharing and community lending practices that are strengthening the foundation of agriculture in Haiti. To read more about efforts like these or to support community-led efforts for sustainable agriculture, please visit www.lambifund.org.