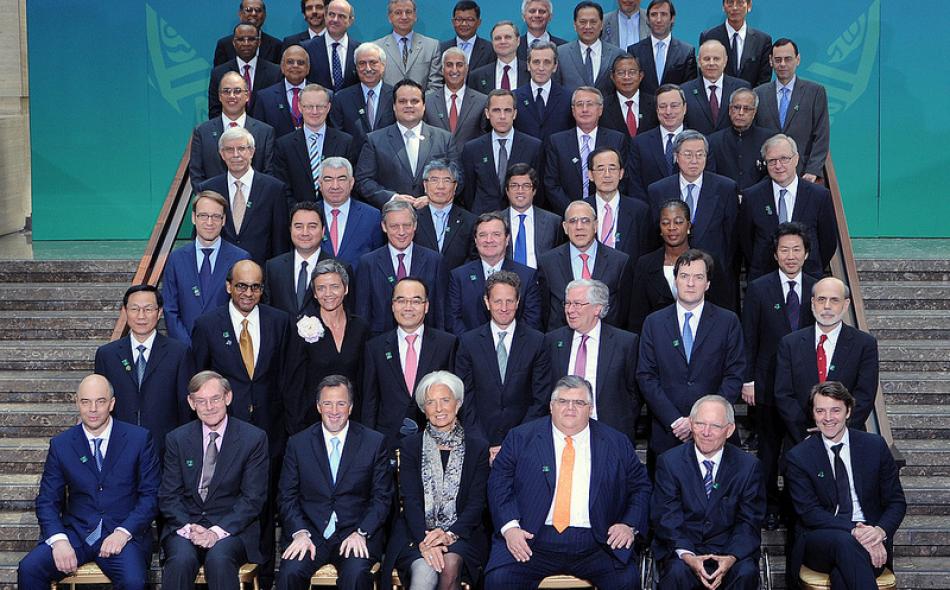 Soon you will be on your way to the Group of 20 finance ministers meeting on November 4–5 in Mexico City. To judge by what has been posted at G-20 websites, you will have reviewed many reports that indicate progress towards fulfilling the Heads of State commitment in September 2009 to place all “standardized Over the Counter derivatives” (OTC) on regulated trading venues “as appropriate” by the end of 2012. However, as the Financial Stability Board has reported to you, this goal will not be met in 2012. Unfortunately, if and when that goal is achieved, it may have small relevance to the broader goal of regulating OTC derivatives, to achieve more transparent and stable markets.

Notwithstanding legislative reforms, and the $29 trillion in emergency loans from the U.S. Federal Reserve system to U.S. and European banks and to central banks from 2007 to 2010, the rescued banks have changed neither their dark-market trading practices nor products. As a September 2012 Bank for International Settlements report informed you, “we find no evidence that rescued banks reduced the riskiness of their new lending.” Part of what enables these rescued banks to elude oversight is the banks’ ever-increasing use of “customized” or “bespoke” OTC derivatives. The putatively “customized” OTC derivatives are of such a large gross notional volume as to induce price volatility that occurs when trader “herd behaviors” try to interpret the rumor of price signals emerging from OTC markets and liquidity that are dark to regulators and to the public.

Given the riskiness of these still unregulated OTC instruments and their unstable markets, it is surprising to read your advice to delay U.S. Commodity Futures Trading Commission (CFTC) final rulemaking in your letter of October 17 to CFTC Chairman Gary Gensler. You very circumspectly state your concerns about the CFTC guidance on cross-border OTC derivatives, released on July 12. Because your regulatory agencies have already commented separately on this guidance, your joint letter appears to be a political statement about just how far the CFTC should exercise its authority under the “Dodd-Frank Wall Street Reform and Consumer Protection Act of 2010” to prevent foreign affiliate trades of U.S. OTC dealers from having an adverse effect on the U.S. economy.

The passage of legislation on OTC derivatives in the European Parliament and the Japanese Diet that will occur late in 2012 or early in 2013 are important steps towards fulfilling the September 2009 G-20 commitments on standardized OTC derivatives. However, regulations to implement and enforce this legislation are unlikely to be implemented before 2014. In the interim, OTC markets will continue to be unregulated and vulnerable to excessive speculation. Nevertheless, you caution Chairman Gensler “At a time of highly fragile economic growth, we believe it is critical to avoid taking steps that risk a withdrawal of global financial markets into inevitably less efficient regional or national markets.” This implies that the CFTC draft guidance on cross-border OTC derivatives is one of these risky steps. Finally, you urge Chairman Gensler, “before finalizing any rules or enforcing any deadlines, take the time to make sure that U.S. rulemaking works not just domestically but globally.”

Many Dodd-Frank rulemaking deadlines have come and gone, in part due to the need for the CFTC staff to take into account thousands of comments, generated largely by a massive global financial services industry lobbying campaign, as they draft rules. Industry lawsuits have likewise delayed rule implementation and subsequent enforcement. Indeed, the cross-border guidance itself, when finalized, likely will be the subject of an industry lawsuit. The CFTC is already taking more than enough time to develop better regulated markets and enforceable rules to prevent regulatory arbitrage.

Indeed, the G-20 finance ministers should take the time at the November meeting to discuss how to best enable trade data surveillance of foreign affiliates operating in your jurisdictions. You might consider the CFTC’s proposal in the cross-border guidance to allow “substituted compliance” with Dodd-Frank by foreign affiliates of U.S. banks—in cooperation with foreign regulatory authorities—which provides a substantive model for regulatory cooperation over the global OTC derivatives market. While there are criticisms of certain exemptions proposed in the draft guidance, no better proposal for cross-border regulation of OTC derivatives trading by global entities has emerged so far. Because OTC markets have not been regulated nationally, much less internationally, there will be some misunderstandings and errors in international cooperation during the process of learning to regulate foreign affiliate trades. These are a relatively small price to pay for building a well-regulated global OTC derivatives market.

The G-20 meetings present an important opportunity to face the challenges of substantive regulatory cooperation, rather than adopting the mutual recognition agreements on high-level principles of regulation that the financial services industry, and even some regulators, have advocated. Mutual recognition of high-level principles during the past decade did not prevent the near-catastrophic global counterparty default cascades of 2008-09. Only timely and comprehensive surveillance of trade data and enforcement of market rules can prevent the imprudence of a few global entities from leading to an economic crisis.

Industry threats to move trades to the weakest regulatory jurisdictions should themselves be regarded as tantamount to “fragmentation of global markets.” The urging of Wall Street lawyers to their Asian clients to evade Dodd- Frank represents a threat to the rule of law nationally and to G-20 oversight generally. To give in to such threats by subordinating cross-border regulation to a principle to “avoid fragmentation of global markets” is a strategic error of the first magnitude. No economic recovery can be sustained on the basis of a regulatory regime influenced by such threats.

In May 2009, former International Monetary Fund Chief Economist Simon Johnson wrote of how the financial services oligarchy had captured U.S. regulators to block many financial reforms. The CFTC, to some extent, has resisted this capture; it would be tragic for the global economy if the G-20 helped to complete this capture.

This October, Johnson wrote of how the next global financial crisis will begin in Japan and reverberate globally. I very much hope, of course, that he is wrong. In any event, the public interest duty of G-20 finance ministers and central bankers will not be well-served by shooting the regulatory messenger if deregulation or non-regulation of the OTC derivatives market is one of the crisis triggers.