A long and winding road to global derivatives market reform 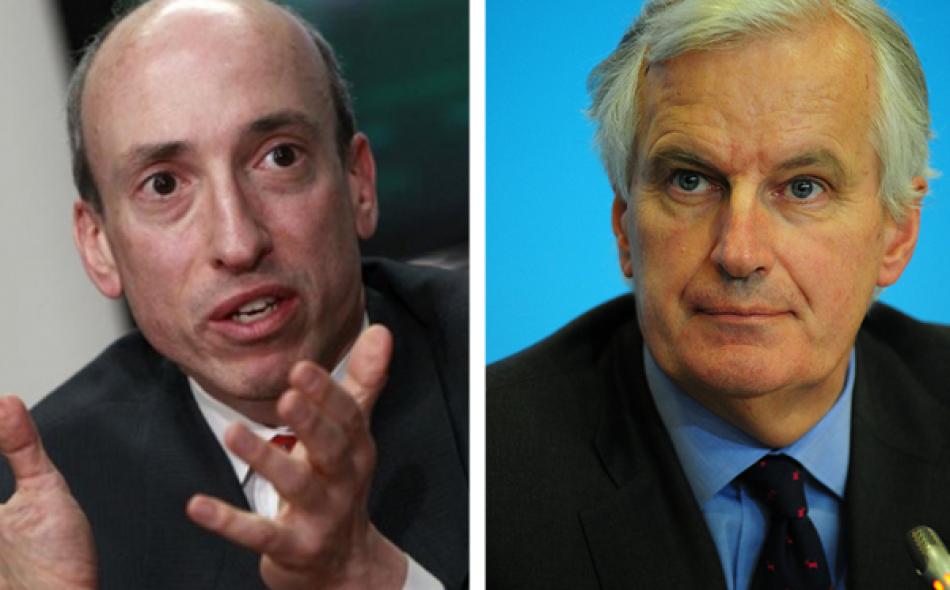 In September 2009, the Group of 20 Leaders, including President Barack Obama, announced their commitment to regulate the over-the-counter (OTC) commodity and financial derivatives market. Since then, however, ferocious industry resistance, abetted by sympathetic lawmakers, has frustrated realization of this commitment.  Substantive differences in law and market infrastructure, combined with this resistance, have made the reform process a long and winding road without a comprehensive agreement on how to prevent another OTC-triggered global financial crisis.

It would be hard to overstate the impacts of the 2008 financial meltdown. Losses among major players in the global OTC market threatened to bankrupt the global financial system. Taxpayer-funded bailouts of the world’s largest banks and nearly $30 trillion of U.S. Federal Reserve Bank emergency ultra-low interest rate loans saved the banks from losses for which they had woefully inadequate reserves to pay up. The General Accountability Office (GAO) has estimated the financial damage to the U.S. economy from the OTC market meltdown at about $13 trillion, to say nothing of untold costs of human suffering.

Agriculture derivatives prices and price volatility have been inflated by unregulated and hence unreported OTC trades. Food import–dependent and food-insecure developing countries are particularly vulnerable to agricultural price volatility in “hard currencies” whose value is determined by OTC foreign exchange derivatives. Notwithstanding the optimistic outlook of the United Nations Food and Agriculture Organization (FAO) that projected economic growth will reduce the FAO-estimated 868 million food insecure, IATP was among a group of scholars and organizations who criticized FAO’s assumptions about food insecurity and food prices.

On July 11, the Commodity Futures Trading Commission (CFTC) and the European Commission announced that they had reached a “Path Forward” to regulate transatlantic OTC markets. U.S. and European OTC trades account for perhaps 85 percent of the global OTC derivatives market. Therefore, the transatlantic communiqué is a step on the long and winding road towards regulation of markets that are about eight times as large as currently regulated markets. According to a July 12 article in Risk (subscription required), the financial services lobby is agitated by what it interprets in the “Path Forward” announcement as a “stricter rule applies” intention in the event of differences between the U.S. and European regulatory regimes.  Based on the “Path Forward,” the G-20 finance ministers, meeting July 18–19 in Moscow, likely will claim progress on regulating OTC markets to their G-20 Leaders, who will meet in September in St. Petersburg.

The day after the transatlantic announcement, the CFTC commissioners voted 3 to 1 to extend the deadline to December 21 for compliance with CFTC regulation of the foreign affiliate trades of U.S. OTC dealers. The commissioners also voted to finalize draft CFTC guidance on the cross-border application of the Dodd Frank Wall Street Reform and Consumer Financial Protection Act of 2010. The commissioners furthermore set a December 21 deadline for the CFTC to determine whether the OTC derivatives regulatory regimes of Australia, Canada, the European Union, Hong Kong, Japan and Switzerland provided the “comparable, comprehensive oversight” required by Dodd Frank. Without the deadline extension, foreign OTC dealers would have had to begin to comply on July 13 with the CFTC requirements on OTC dealer broker registration, trade data reporting and clearing (an orderly payment system that prevents systemic wide defaults) or be excluded from the lucrative U.S. markets.

That deadline extension also allows the Commission, the European Parliament and the European Council of financial and economic ministers (ECOFIN) time to come to agreement on revising the Market in Financial Instruments Directive (MiFID) and the Markets Abuse Directive (MAD). MiFID covers such regulatory instruments as position limits on the market share of specific commodity contracts and high-frequency trading instruments for millions of millisecond-long transactions. (In April, European NGOs published an analysis of MiFID loopholes.)  MAD concerns the sanctions regime for violators of MiFID and other market rules in the 28 European Union member states.

European and other Group of 20 states had lobbied the CFTC not only for the deadline extension but for a continuation of the mutual recognition of regulatory regimes that prevailed prior to 2008. They strongly opposed the CFTC draft guidance proposal to allow regulators to verify cross-border compliance, by reviewing OTC trade data in foreign jurisdictions, as a violation of national sovereignty and the privacy of OTC investors and dealers.

On April 18, EC Commissioner Michel Barnier and eight G-20 finance ministers wrote to Secretary of Treasury Jacob Lew, the U.S. representative to the G-20 finance ministers, to request his intervention to have the CFTC extend its July 12 compliance deadline and allow national regulators to oversee the foreign affiliate trades of U.S. OTC dealer brokers. Defaults on unregulated OTC trades by the London offices of JP Morgan, the American Insurance Group, Goldman Sachs and MF Global, etc. resulted in the public bailouts of these globally trading, but U.S. headquartered, entities.

Nevertheless, the April 18 signatories maintained that “as a principle, local regulations should not be extended beyond national borders.” The derivatives market is essentially cross-border and cybernetic; still, these G-20 ministers maintain that global entities with thousands of foreign affiliates  (see page 71) can be regulated effectively using the voluntary principles of the International Organization of Securities Commission (IOSCO) for petitioning foreign regulators for access to foreign affiliate trade data that affects the solvency of home country jurisdictions, such as that of the CFTC.

The IOSCO principles put a heavy burden on the petitioning regulator to demonstrate the “necessity” for regulator access to foreign affiliate OTC trade data. This appears to require that the foreign regulator demonstrate which rule was violated and how by an OTC dealer broker in order to access the data required to make that demonstration. During the access petition period, the data could be moved, by a regulator zealous to protect the competitive advantage of a “national” bank, to another jurisdiction or be recoded to frustrate computer enabled data surveillance. No doubt, the April 18 signatories will continue to lobby Secretary Lew for a steep burden of proof for regulator access to OTC trade data. They may also ratchet up their rhetoric about data privacy laws protecting OTC dealer brokers, as if global OTC dealers were private individuals, in light of the revelations about U.S. spying in multilateral negotiations.

The “Path Forward” states, “With respect to central counterparties (CCPs), CFTC rules and EMIR [European Markets Infrastructure Regulation] are based on international minimal standards.” CCPs are to do for the OTC market what regulated exchanges do for the futures and options market, i.e., to act as a buyer for every seller and a seller for every buyer, preventing the default of one counterparty in a trade from resulting in the default cascades of 2008 and 2009. Even though the clearing of “standardized” OTC derivatives on CCPs is the chief derivatives regulatory commitment of the G-20 leaders, it is worth noting that nearly four years after that commitment was made, the struggle to regulate OTC dealer brokers relies on “international minimal standards,” in the view of the CFTC and the EC.

Did the CFTC get anything tangible in exchange for the July 11“Path Forward” communique and the July 12 CFTC vote to extend “transitional relief” to foreign jurisdictions in the final guidance on the cross-border implementation of OTC trade rules? The finalized cross border guidance, all 296 pages of it, was published on July 15. IATP commented on the draft guidance, but it will take a while to determine whether the final guidance provides an adequate basis for regulating the foreign affiliate trades of U.S. OTC dealer brokers. A comprehensive answer to that question will lie not just in the content of the final guidance but in the ability of the Obama administration to implement the guidance and the ability of the European Commission to finalize and implement OTC derivatives legislation.

The financial industry lobby is upset that the CFTC has chosen guidance as the legal form of cross-border implementation, rather than the more prolonged formal rule-making process. OTC broker dealers on both sides of the Atlantic may decide to challenge the cross-border guidance implementation in court, to further delay and weaken OTC reform; doing so will only make the G-20 Leaders look weak and ineffectual on realizing their one agreed commitment on regulating OTC derivatives. This will be a long, hot summer for market regulators as they try to put the “Path Forward” into effect.