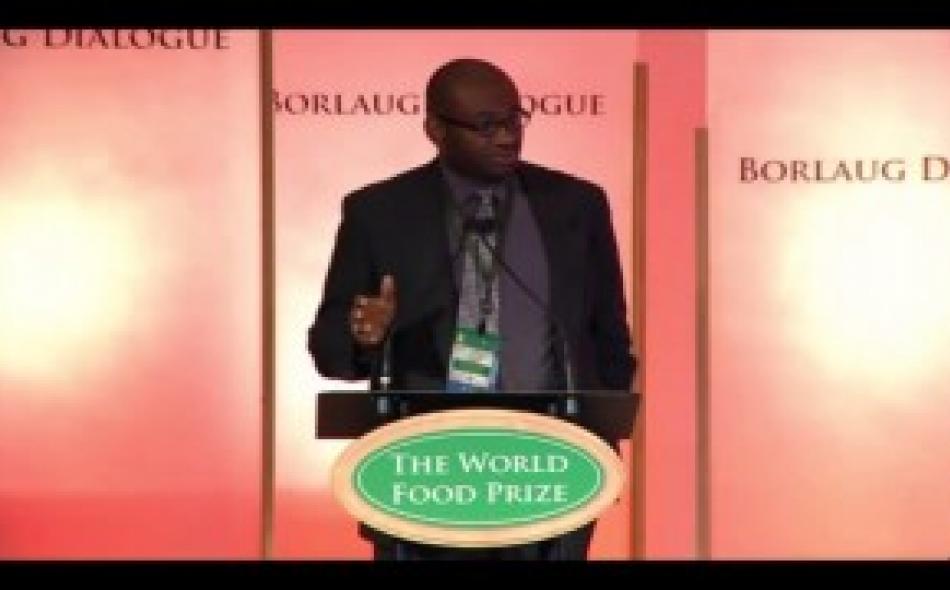 These are the remarks of M. Jahi Chappell, Ph.D., IATP's director of agroecology and agriculture policy to the World Food Prize on October 18, 2013. Videos of Dr. Chappell’s speech can be found at the IATP YouTube channel, in both English and Portuguese.

There has been, with this World Food Prize, a celebration of science. In the lead up to the Prize; in the ceremony last night; and more broadly within the career of the late Norman Borlaug, science is rightly praised as a powerful and important set of tools.

Unfortunately, the power of these tools has been blunted. It has been blunted because science—which at its most basic is the careful and systematic study of the world around us, and the consistent testing of our ideas against reality—this wonderful and powerful process has been narrowed too often in discussions of food to mean technology. Technology is but one way to use science; it is only the tip of one particular tool that can be found in the powerful toolbox that is science.

What do I mean? Well, the World Food Prize is well-named, as it is about food for the world, not just agriculture for the world. Scientifically, these are two different things. We know that what is produced is not the same as how much actually goes to become food for people[1], but too often we forget this. Luckily, this is a place where the toolbox of science can help us, but only if we open it wider to use all of the tools—including social sciences like sociology, anthropology, ecological economics and political ecology.[2]

So let’s do that. Let’s talk science.

We know that most countries produce more than enough food, even after waste, but many of them still have hungry people.

We know that in places where production is a challenge like sub-Saharan Africa, yields can be increased through innovation, agroecological technology, education, and support for women and small farmers. We also know that producing enough food does not eradicate hunger. India, which produces more than enough food for its citizens, has more hungry people than the whole continent of Africa[3]; it also has one of the highest infant malnutrition rates in the world and, parallel to Jomo’s comments[4], a malnutrition rate nearly twice its economic poverty rate[5].

And we know that in India, as in many other places, this is tied to the legacies of monoculture, cash crops, and a lack of support for smallholder farmers, household equality, especially gender equality, and agrobiodiversity.[6]

We know that smallholders produce a disproportionate amount of the world’s food, in some places as much as twice as much as the proportion of land they hold. We’ve consistently seen that smallholder farmers very often produce more per unit area than larger farmers. Indeed, the observation is so common that it has been formally named the Inverse Relationship between Farm Size and Productivity. I know many researchers, including perhaps, some here, are somewhat skeptical about the rigor or significance of these findings. But I think the same type of skepticism has quite often accompanied new innovations and new ideas. Skepticism, for example, about the usefulness of biotechnology, should not and has not stopped investigation of how it might be used.

We have to be brave enough to ask ourselves, especially about this Inverse Relationship and its implications, whether we may need to move away from large farms and invest more heavily in small farms.[7] We have to ask ourselves if our skepticism may reflect certain biases or a reluctance to engage against the current trends of agricultural consolidation—or whether it reflects the empirical reality, where this relationship is seen, again and again[8].

Additionally, we know that smallholder farmers tend to have a larger variety of diverse, healthy crops and cultivars, which can provide sufficient dietary variety and micronutrients. Too often, the diverse crops that smallholders rely on for stability, resilience, and nutritional diversity are defined as “women’s crops.” Traditional crops, and the fact that often they cannot easily be made into large-scale monocultures, can be both a strength and a weakness. The strength stems from the fact that diversity, field, plot, landscape and garden-scale variation is the very biological basis of that powerful process: evolution. Diversity allows adaptation and is the very stuff that evolution is made of. Diverse crops often correspondingly support diverse and resilient livelihoods, and—study after study has confirmed this—higher levels of ecosystem services.

They talk in economics—and in the previous panel—about “getting the prices right.”[9] That is, paying the true costs and for the true benefits of items in our society. Well, estimates put the value of unmarketed ecosystem services at three times the size of the nominal world economic size. We act as if being a small farmer is hard only because the work is hard. And of course it is. But it’s also hard because farmers are too often forced to be our world’s volunteers in keeping agrobiodiversity. The ecosystem services, and the cultural services, provided by small farmers are not socioeconomically valued, and so while they’re paid part of the price of making food, we’re making many of the world’s smallholder farmers work as our unpaid volunteers in maintaining, fighting for, and struggling to stay keepers of huge amounts of the world’s biodiversity.

And those farmers, especially larger-scale farmers, who make the rational decision to focus on producing only what they’re paid for—just making one crop, and a lot of it—are simply following a rational response in narrowing diversity, separating crops and livestock, and using energy-intensive and unsustainable levels of inputs. We should understand these kinds of decisions, but we must also understand that these decisions are in the face of a system that doesn’t include all the costs (like climate change) and doesn’t pay for all the services (like preservation of biodiversity and different cultural ways of being). We need to realize that proper pricing might lead to smaller farms and that decreasing the amount of large farms dramatically would be simply following the science towards appropriately sized farms. We need to keep realizing that science does not simply mean production, and that production does not at all mean food security.

And lastly, we need to remember that, scientifically, our biggest opportunity to fight hunger is pushing hard for equality, particularly equality for smallholder women. Over 50 percent of the decrease in hunger between 1970 and 1995 is likely to have come from increases in gender equality[10]. Yet we don’t see 50 percent of research effort going towards this. Estimates say that increasing women’s education and status to simple equity has 3 to 4 times the potential to reduce hunger than just producing more food alone—but I’m quite sure that this does not get 3 to 4 times the attention.

So if I am to conclude with one message, it is for us to remember that science is a powerful set of tools, but to use it we must learn about how to use all of its tools. Social, natural and technological—and we must expressly and purposefully use them to support small farmers, especially women farmers, and must never let “social” approaches be the second step in our conversations about feeding the world, but always—in line with the science—be at the forefront of our considerations.