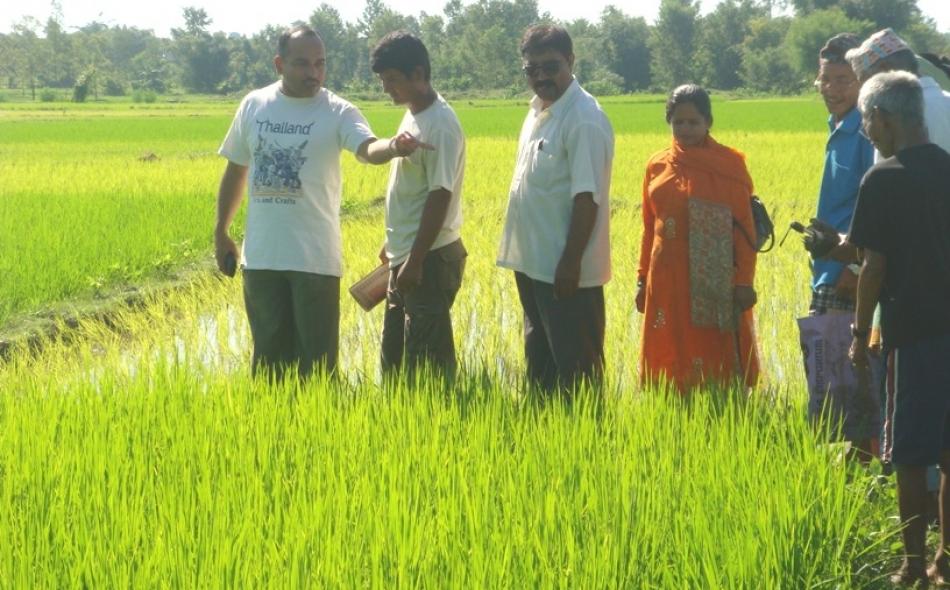 Technicians and farmers discussing the results of sustainable intensification on a rice farm in Nepal.

In a new paper led by collaborators at Leuphana University Lueneburg (Germany) and just released in print in the scientific journal Frontiers in Ecology & the Environment, my colleagues and I question one of the buzzwords in international conversations about hunger and conserving the environment: sustainable intensification (SI). Explained briefly, sustainable intensification seeks to produce the most food, on the least land, with the lowest environmental impact.

SI has been the subject of a recent European Union report, proposals by  prominent scholars, and is a major theme area of the Food and Agriculture Organization of the United Nations. SI is often seen by some experts as “key” to agriculture’s future, particularly in Africa, and has been the subject of a number of high-profile publications in some of the world’s top scientific journals. It is, in short, an idea on the rise.

Despite the term’s popularity among national and international aid organizations and top thinkers, it is getting more attention than it warrants, at least in its current form. Given how readily powerful groups are taking to it, there’s a serious danger that it will drain both funds and attention from the larger and altogether different reforms necessary to fight hunger and food insecurity today, and in the future.

My colleagues and I question, however: Is it a good idea, or a sufficient one, for the problems at hand? Our piece addresses two basic arguments:

In other words, if our goal is dignified and rightful access to culturally appropriate, healthy food for everyone at all times (food security) while being environmentally sustainable, we should not confuse this with undue emphasis on “sustainable intensification.”

In light of persistent misconceptions around sustainability and food production, some relevant basic facts we reference in our piece:

With upcoming meetings this fall like the FAO International Symposium on Agroecology and the Committee on World Food Security, and the nascent Global Alliance on (so-called) Climate Smart Agriculture, it is imperative that these issues be understood, and that addressing these complex problems not be simply swapped out for the far less effective idea of producing more food using less land and fewer resources.

It is true growing more food in a more sustainable manner is something that will need to be done in some places, and at some times. But whenever it’s talked about in the context of hunger, food security or feeding the future, it must come after discussion, participation and planning specifically with those who face hunger and food insecurity, be they small farmers, landless workers or urban residents. Ignoring the issues of procedural justice (who gets to make the decisions and how) and distributive justice (how and who has access to the food produced) is ignoring both the established science and the need for democratic justice that will truly bring us into a food secure and food sovereign future. Organizations and scholars embracing SI need to rethink its usefulness, and its potential to distract us from evidence-based and effective approaches based in human dignity and food sovereignty.