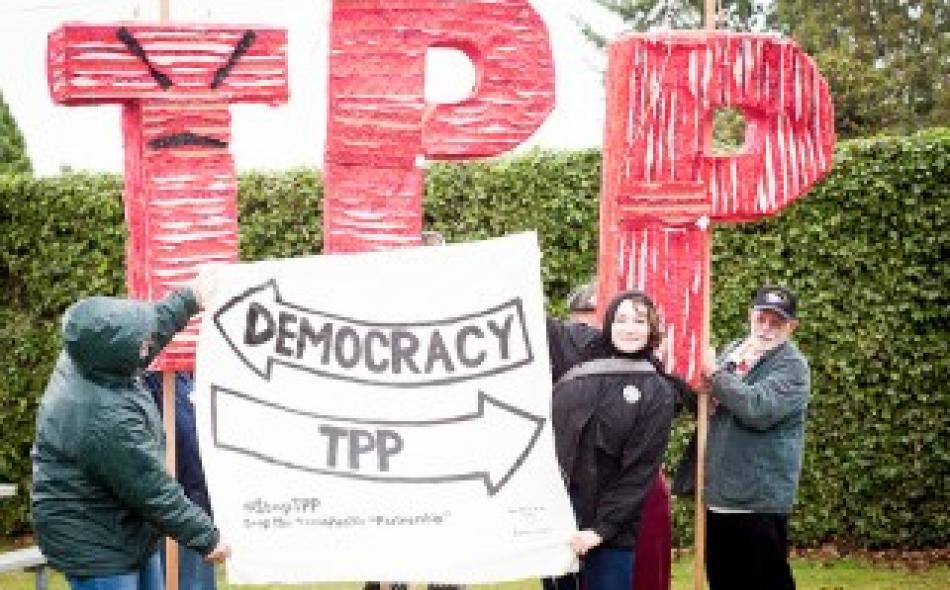 Congress is quietly considering legislation that would speed the passage of two mega trade agreements, and seeks to specifically eliminate government programs that favor “localization.” The bill would give the Obama Administration what is known as “fast track” authority—meaning Congress would surrender its constitutional authority to shape trade agreements negotiated by the president and instead can only vote up or down on the deal.

Why should those working for a fair, sustainable food system care? Perhaps no area of policy has undermined local food systems around the world more than the slew of trade agreements passed over the last several decades. These trade rules cover everything from tariffs, food safety and intellectual property to enshrining corporate rights. They place restrictions on what is allowed in national policies, like the Farm Bill, as well as the state and local level. These deals have heavily tilted the playing field from farmers and consumers toward global agribusiness and food giants like Cargill, Monsanto and Wal-Mart.

Because these trade deals, like NAFTA and CAFTA, have been so blatantly negotiated on behalf of multinational corporations and have contributed to growing income inequality, they’ve been extremely unpopular. This is why the Obama Administration has decided to negotiate these two new trade agreements in secret. That’s right, the Trans-Pacific Partnership (including more than a dozen countries) and the Transatlantic Trade and Investment Partnership (with our biggest trading partner, the EU) is being negotiated entirely behind closed doors. The negotiating text has not been made public, and, amazingly, even many members of Congress are in the dark about what’s happening.

Aside from putting these secret trade deals on a fast track, the bill introduced by Senators Max Baucus and Orrin Hatch and Representative Dave Camp includes a new negotiating priority objective to eliminate what it calls “localization barriers.” Local content requirements have been a stated target of the U.S. Trade Representative in other countries like India. But of course, any agreement to undermine local content rules in another country would also apply to U.S. programs that give preference to locally sourced food or energy.

Here are 5 issues on the negotiating table in these trade agreements that local food activists should be worried about:

There is too much at stake for Congress to pass fast track and open the door for the speedy passage of mega trade deals that threaten to undermine much of the important work being done to build more sustainable, healthy and fair food systems. The good news is that we can prevent this from happening. There is growing opposition to Fast Track in Congress. More than 150 House members have expressed their opposition to the bill. Now is the time for the local and sustainable food community needs to tell their member of Congress to oppose fast track. IATP is a member of the Citizens Trade Campaign, go to their action center and let your member of Congress know your concerns.