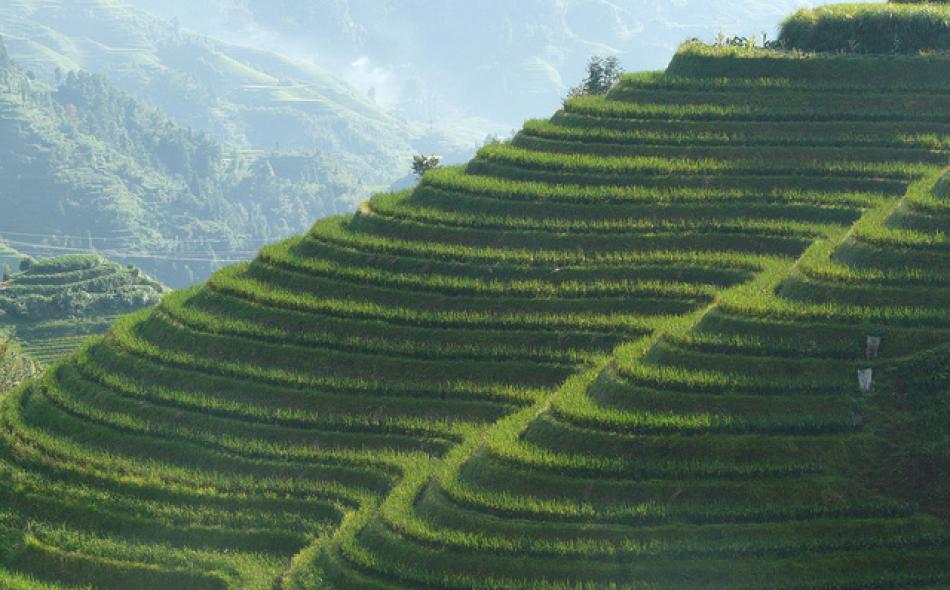 Rice terraces near the village of Dazhai.

The headline of last week’s Science Insider blog was eye-catching: “China pulls plug on genetically modified rice and corn.” (The RT version was even better: “End of the line: GMO production in China halted.”) What actually happened was far less dramatic or definitive. On August 17, biosafety permits for research on two strains of GM corn and one of GM rice expired and were not renewed by the Chinese Ministry of Agriculture. But exactly why this happened and what it means for the future of genetic engineering of food in China is uncertain. (This is being debated in the Chinese press.)

The apparent tightening of enforcement is not limited to GMO experiments. Since last fall, several large shipments of corn from the U.S. have been turned back on the grounds that they contained a Syngenta GE variety that has not been approved for sale in China.

Whatever the reason for these actions, the stakes are high in the larger game of China’s agricultural and food policies. Once fully self-sufficient and cut off from global trade, China is now more and more deeply integrated into the global food system as both an importer and exporter. But open as its food economy has become, the government seems deeply ambivalent about GMOs. GM cotton is grown widely in western China and GM soy is imported from the U.S. and Brazil, but GM rice and wheat have never been approved for sale or consumption. China’s shifting regulatory decisions can have major reverberations around the world. U.S. grain trade groups told Bloomberg News Service that losses in 2014-15 due to the rejection of GE corn from the U.S. could top $6 billion, and the question of who should bear those losses is driving a wedge between farmers, traders and seed companies. So it’s worth taking a critical look at the various reasons that have been put forward to explain China’s recent actions.

There is a very messy public debate about GM food in China, and both sides now claim that last week’s decision was the work of anti-GMO forces in society. In an op-ed posted in The Conversation, Nottingham-based biotech researcher Cao Cong writes that unlike the UK, (Where regulators recently OK’d field trials for a GE oilseed.) China has “an anti-GM movement whose power and influence are more than matched by its fervour [sic] and sheer, undiluted paranoia.” Cao concludes that this movement has now effectively smothered China’s hopes for feeding itself. (This is an interesting image, contrasting the UK’s “rational” regulators with their Chinese counterparts who are held hostage by the whims of a superstitious public!)

Opposition to GE food in China comes from a variety of sources. Some opposition comes from the international environmental movement. Greenpeace has fought this issue for a decade, most notably through their discovery of experimental GE rice being sold illegally as early as 2005 in Hubei province. Although people on both sides say their opponents are tools of foreign powers, most anti-GMO sentiment in China seems to be homegrown, coming from farmers, scientists, consumers and members of the national defense establishment. And while a few high-profile anti-GMO activists seem to fit Cao Cong’s image of paranoid fear-mongering, his argument glosses over the more reasonable and pragmatic concerns that may have motivated last week’s decision.

The most immediate of these concerns stems from the discovery last month that GE rice is again being sold illegally to the public. That story was broken by News Probe, an investigative television program that commissioned testing of rice from a supermarket in the city of Wuhan. One of the strains they found was a pest-resistant variety developed by Zhang Qifa at South China Normal University, which is also in Wuhan, and the permit for continued cultivation of that strain is one of the three that were subsequently not renewed. It is entirely possible that, embarrassed by the revelation of their regulatory failure, the Ministry of Agriculture simply decided not to renew any of the three permits.

While last week’s decision appears to be a response to scandal, the ongoing rejection of GE corn shipments may have nothing to do with biosafety concerns. China’s recent corn harvest have been huge, as its farmers responded to new price supports and other production subsidies, so some say the sudden vigilance of customs toward cheap U.S. imports is economically motivated. As one American corn broker put it, “China can overlook GMOs when stocks are tight, but when they're trying to protect their domestic farmers or they're in surplus, they can come up with things to mess with us…”

The negative news about GMOs during 2014 is a surprising contrast to just a year ago, when the official media published a series of pro-GMO statements from Agriculture Ministry officials and interviews with scientists that seemed designed to pave the way for broader acceptance of GE foods. Now the pendulum has swung to the other extreme. Chinese politics and governance have long been characterized by cycles of loosening and tightening (“fang/shou”) of control. In politics, this means turning a blind eye to free expression or dissent at certain times, and then suddenly cracking down at others. Similarly, Chinese environmental and health regulations may be very strict on paper, but enforcement tends to be uneven, tightening in response to major scandals but otherwise loose, sporadic or selective. In the cases of GE experiments and import restrictions there has been no policy or rule change, merely a stricter enforcement of existing rules. US grain traders can complain, but strictly speaking they are the ones who are in the wrong for trying to sell China a seed variety that the Chinese government has not yet approved.

There is also a bigger question of whether or not China really needs GMOs in order to feed itself, as biotechpromoters claim. China’s chemical-intensive farming system is causing a variety of environmental and public health problems. The introduction of Bt cotton (now the most widely planted GE crop) was initially hailed for dramatically reducing pesticide use, but subsequent studies found that after several years, exploding populations of pests that were not susceptible to Bt eliminated those initial advantages. And as the economic and environmental returns to GE crops diminish, China’s non-GE agriculture—warts and all—continues to achieve bumper food harvests.

One final factor in all of this is the current high-level political situation in China. The tightening up of regulations on GMOs is taking place in a general atmosphere of re-centralized control in Chinese society as new President Xi Jinping consolidates his position. After Tiananmen, China’s leaders seemed to regard deregulation and opening up as the recipe for national prosperity. (With notable exceptions such as Falun Gong, Tibet and Xinjiang!) That formula brought rapid GDP growth, but at a tremendous cost in terms of social inequality, corruption and environmental degradation. Xi doesn’t want to growth to stop, but seems committed to imposing new discipline in the Party, the economy and society, and a more assertive nationalist position in foreign affairs and trade. Regulators in Agriculture and Customs taking a harder line to rein in research and trade in GMOs is consistent with this broad trend toward reassertion of central control.

So on one side of the balance sheet, the GMO crops that China approved turned out not to be a game-changer after all. On the other side, there are biosafety questions, a lack of effective regulation, economic competitiveness issues, a highly skeptical public and major export markets like Japan and Europe that reject GMO foods. Seen in this light, China’s reluctance to embrace GMOs makes perfect sense.

Jim Harkness is IATP's senior advisor on China and the former president of IATP.