Real solutions from agriculture at the People's Climate March 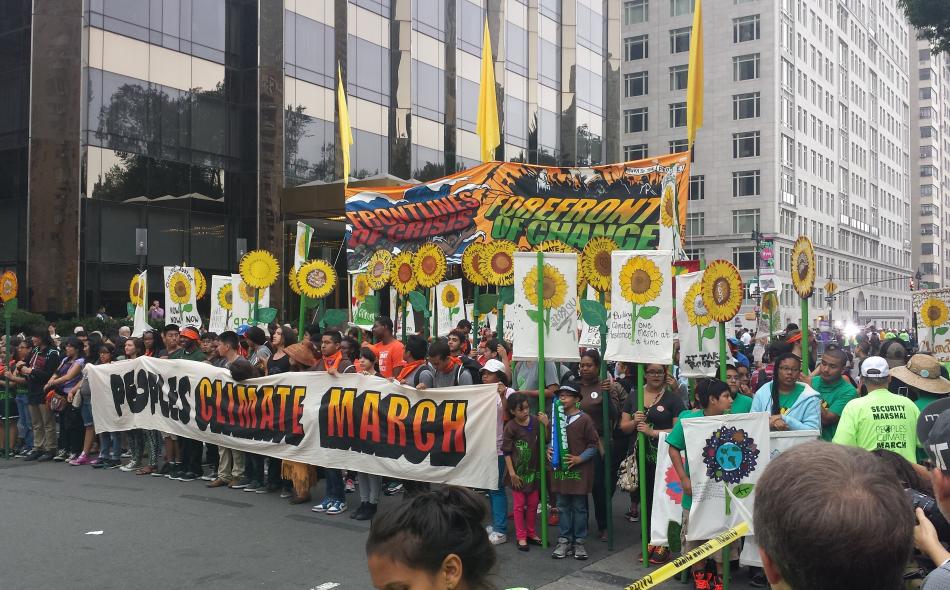 IATP’s Tara Ritter is blogging from New York City as she attends the NYC Climate Convergence and the People's Climate March.

On the day before the People’s Climate March—what’s being billed as the largest mass climate demonstration in history—the Organic Consumers Association hosted a day of workshops as part of the NYC Climate Convergence. The final workshop was entitled “Now that the U.S. supports Climate-Smart Agriculture, is reform of our climate-dumb food system possible?” The speakers were Ronnie Cummins and Will Allen of the Organic Consumers Association, Anna Lappé of the Small Planet Institute, Elizabeth Kucinich of the Center for Food Safety, and myself representing IATP.

The discussion was passionate and hopeful—each of the speakers relayed methods of reversing the current carbon crisis. Elizabeth Kucinich posed an important question: “How will we be farming in 1000 years?”—pointing out that as we near peak water and peak oil, we will have no choice but to reform farming practices. In order to be sustainable environmentally and from a social justice perspective, this reform must take the form of agroecological, organic and regenerative agriculture. These types of agriculture have the potential to not only mitigate climate change, but to reverse it by pulling carbon out of the atmosphere and sequestering it in soils and forests. As Ronnie Cummins pointed out, even if the world quit emitting greenhouse gases tomorrow, we would still have a problem because of the greenhouse gases we’ve emitted so far. This indicates the need for organic and regenerative agriculture as a solution to climate change, and the good news is, we already know how to do it.

The solutions discussed in this workshop are the real cornerstones of climate-resilient and regenerative agriculture, providing a stark contrast to the empty rhetoric in the Framework Document of the Global Alliance for Climate Smart Agriculture (GACSA). The alliance is the only deliverable on the agenda for the agriculture session of the U.N. Climate Summit, and many NGOs and civil society organizations have serious doubts that it is climate smart on any level.

The Alliance lacks any environmental criteria, never defining what climate-smart agriculture is, or more importantly, what it is not. There is also no membership criteria, hoping it can be everything to everyone. The GACSA is calling on governments, food processors and sellers, scientists, educational organizations, civil society and non-government organizations, multilateral and international organizations, and private sector corporations to the table. So far, the Climate-Smart family includes members like Yara (the world’s largest fertilizer manufacturer), Syngenta, McDonalds and Walmart. The lack of environmental or membership criteria paired with the lack of a clear governance structure makes it extremely likely that the Alliance will serve primarily as a corporate greenwashing platform.

Real solutions in agriculture are those which are based on agroecology and place power in the hands of farmers instead of in the hands of corporations—as a group of scientists and scholars outlined in a letter to the FAO last week. Today’s workshops organized by the Organic Consumers Association discussed some of those options, and made the idea of reversing the carbon crisis seem possible.