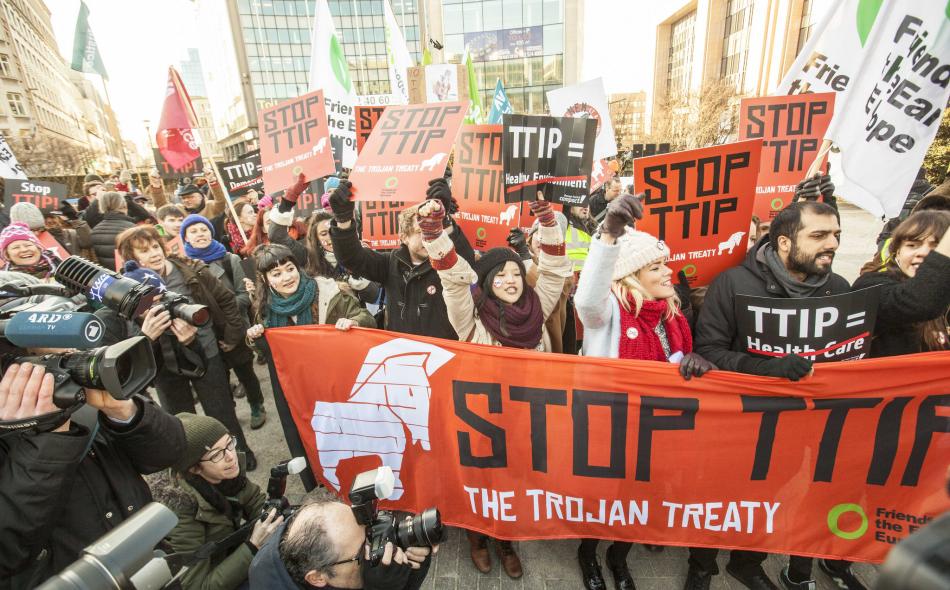 The eighth negotiating session for the Transatlantic Trade and Investment Partnership Agreement (TTIP) is happening this week in Brussels. One of the thorniest parts of the negotiations between the U.S. and EU concerns food safety.

Today, IATP  published an analysis of the European Commission’s proposed chapter on food safety, plant health and animal health and welfare (SPS), released on January 7, and a January 28 leak of the chapter on “regulatory cooperation”. The proposal for regulatory cooperation covers all U.S. and EU “regulatory acts” (pre-regulatory research and draft proposed regulations, finalized regulations, and their implementation and enforcement), including those of U.S. states and EU member states that might have a “significant impacts on trade and investment” (Article 5).

Additionally, IATP has contributed to a joint NGO statement about the SPS chapter that was released in time for an EC-sponsored TTIP Stakeholders meeting on February 4. IATP’s analysis of the proposed chapters and of the U.S. government’s insufficient capacity to provide the “appropriate level” of SPS protection guaranteed in TTIP, give plenty of reason to doubt that public, environmental and animal health and welfare will be protected, as negotiators have promised.

TTIP and the TransPacific Partnership (TPP) are primarily agreements about ensuring that regulations to protect public health, food safety, environmental health and worker safety are “least trade restrictive,” although the TPP also proposes sharp reductions in import tariffs. Because the public has no access to the U.S. Trade Representative’s (USTR) negotiating texts and because industry demands to the USTR to remove “trade irritants” include SPS regulations, these agreements are extremely controversial, particularly in Europe.

For example, an anti-TTIP rally on food and agriculture last month in Berlin drew more than 50,000 people. In December, the European Citizens Initiative delivered to EU President Jean-Claude Juncker a “birthday card” with a million signatures on a petition to stop TTIP negotiations altogether.  If the Congress gives President Obama “fast track” Trade Promotion Authority (TPA) in March, the USTR could present the TPP and the TTIP to Congress for a yes or no vote, since “fast track” TPA forbids amendments and allows very limited debate on the trade agreements.

IATP’s analysis of the EC proposed SPS chapter and the leaked regulatory cooperation chapter, which applies to the SPS chapter, yields the following highlights:

Much remains to be negotiated, particularly more than a dozen annexes that will contain crucial details about how the SPS chapter is to be implemented. The European Commission has promised to publish future negotiating proposals after they have been discussed with the USTR. The Obama administration has made no such commitment for any trade agreement. Indeed, given the Obama administration’s relentless pursuit of whistle-blowers, it is not likely that U.S. officials will leak draft negotiating text.

Members of Congress, without their staff or experts of their choosing, may read the draft negotiating texts in a room with guards posted at the door. The People’s representatives are not allowed to take notes about what they are reading nor may they discuss publicly the textual specifics of the USTR negotiating proposals. If the Obama administration wins fast track Trade Promotion Authority, the USTR will present a final TTIP text to Congress for a yes or no vote, with no amendments allowed. To give fast track a semblance of democracy, the expedited procedure allows each chamber of Congress 20 hours to debate the text it has forbidden itself to amend.

The conclusion of IATP’s analysis urges TTIP negotiators to take a hard look at the very high costs of SPS regulatory and market failure. TTIP’s carefully modulated pressure against regulation in all economic sectors takes place seven years after the deregulation of the financial service industry resulted in the Great Recession in which most U.S. and European citizens still live. The U.S. economy alone suffered at least $12.8 trillion in damage. A 2010 study by a former U.S. Food and Drug Administration economist put the average annual cost of acute (requires hospitalization) foodborne illness at $152 billion. Only part of that cost can be attributed to regulatory failure and only part due to imported food and agriculture products.

However, given that the TTIP economic benefits forecast by proponents amount to a “rounding error” in terms of the EU and U.S. Gross Domestic Product, IATP urges U.S. and EU negotiators to delete the requirement that all SPS regulations must be “least trade restrictive.” TTIP related deregulatory failures could cost a lot more than the negligible macroeconomic gains forecast by TTIP proponents over the next decade or more.