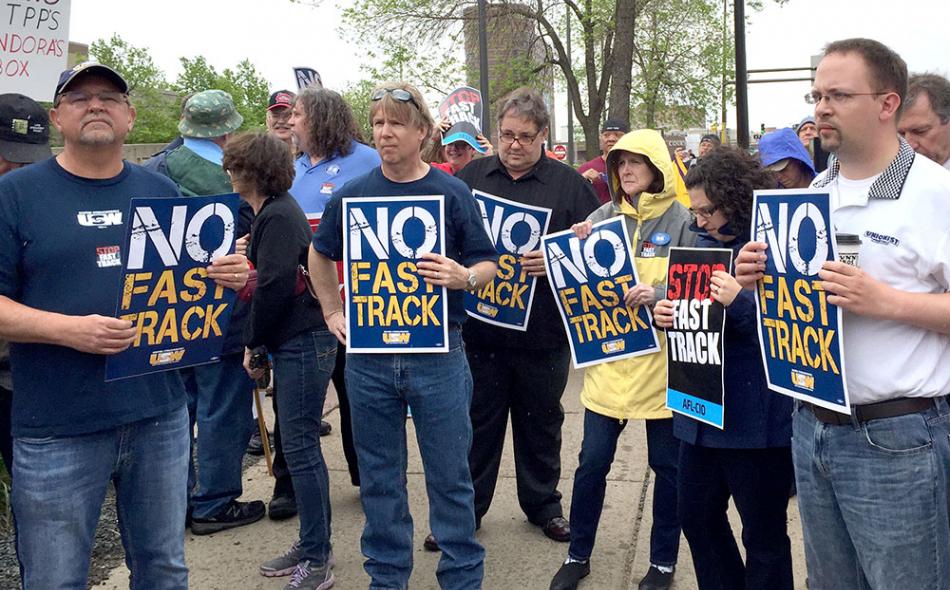 When fast track trade authority squeezed through the House of Representatives last week by 10 votes, big corporate donors breathed a sigh of relief. They had heavily invested in political donations and K Street lobbying power to advance their trade agenda—and expected a return on investment.

And it has been quite an investment. According to Maplight, corporate interests supporting Fast Track contributed more than nine times as much money to House members ($197 million), compared to interests opposing Fast Track ($23 million).

Now, the Fast Track fight returns to the Senate where the flood of corporate money flows just as rapidly. The Guardian, analyzing Federal Election Commission data, reported that corporate members of the U.S. Business Coalition for TPP contributed $1,148,971 to U.S. Senate campaigns between January and March 2015—an average of $17,676.48 was donated to each of the 65 “yea” votes in a previous Fast Track vote in May.

Why do corporate donors care so much about Fast Track? Fast Track, granted to the President for the next six years, would facilitate the negotiation of least two mega trade deals, the Trans-Pacific Partnership (TPP) involving 11 Pacific Rim countries and the Transatlantic Trade and Investment Partnership (TTIP) with Europe, to not only set rules for trade, but expand corporate rights to challenge national and local regulations. Fast Track ties Congress’ hands to only an up or down vote on any future trade agreements—eliminating the possibility of amendments to protect local businesses, workers or the environment. TPP and TTIP are at the top of the corporate and financial industry wish list but first they need Fast Track to finish the deal.

Corporate donors are confident these trade deals will serve their interests because they are working hand-in-glove with the U.S. Trade Representative. Corporate and financial industry interests are represented throughout the USTR’s office, starting at the top with former Citigroup executive Michael Froman leading the agency, reports David Dayen in the American Prospect. Dayen writes: “Assistant trade representative for agricultural affairs, Sharon Bomer Lauritsen previously lobbied for the Biotechnology Industry Organization (BIO). Christopher Wilson also represented BIO as part of the trade consulting group C&M International, before becoming the U.S. deputy chief of mission to the World Trade Organization. Deputy trade representative Robert Holleyman worked for the Business Software Alliance, representing Microsoft, Apple, and IBM, among others.” Open Secrets documents more than 140 USTR current and past staff using the revolving door between government and industry.

Industry groups and representatives also dominate trade advisory committees that “advise” the USTR as it negotiates trade agreements. These corporate advisors are allowed access to the otherwise secret trade negotiating text of the TPP and TTIP. A Washington Post analysis, breaks down how industry groups and representatives dominate these trade advisory groups.

There continues to be strong public opposition to Fast Frack and the proposed free trade agreements. Nearly two-thirds of Americans oppose Fast Track. And more than 2,000 organizations from across the political spectrum have written to Congress opposing Fast Track.

The Fast Track fight in Congress is not only about trade, it’s also about our democracy, and the price we pay for what appears to be an increasingly corrupt pay-to-play system of governance. We’ll find out soon where our Senators stand.