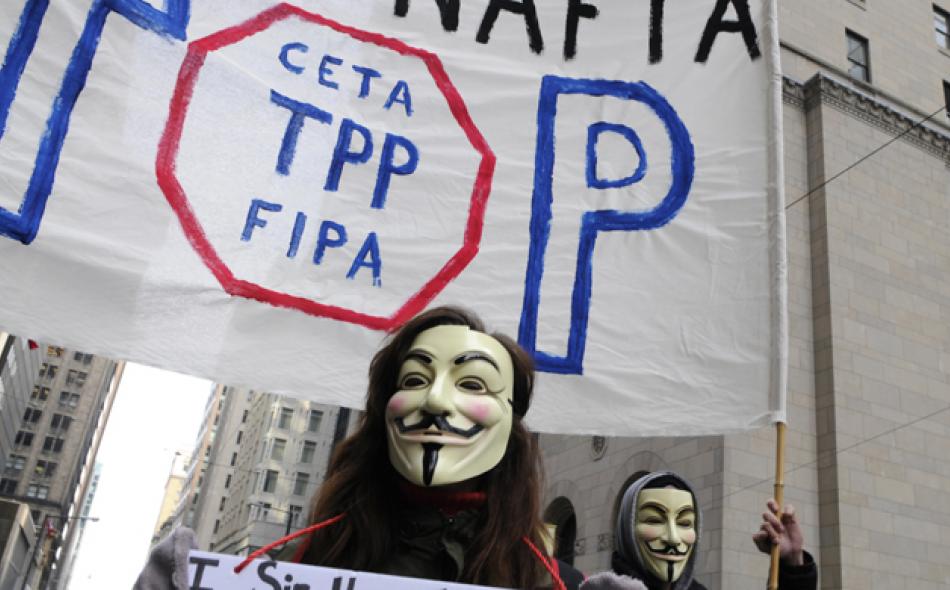 This article is part of New Economy Week, a collaboration between YES! Magazine and the New Economy Coalition that brings you the ideas and people helping build an inclusive economy—in their own words.

President Obama announced his decision last week to reject approval for the Keystone XL pipeline, which would have brought fuel from the Canadian tar sands through the heartland of the U.S. to the Gulf of Mexico. Because this oil emits more greenhouse gases than other forms of fuel, the decision had everything to do with climate change and came just a month prior to the United Nations climate talks in Paris.

“America is now a global leader when it comes to taking serious action to fight climate change,” Obama stated. “And frankly, approving this project would have undercut that global leadership.”

While environmental groups hailed the Keystone announcement, they have criticized the Administration’s push for a massive new trade agreement called the Trans Pacific Partnership (TPP) as a big step backward on climate. In fact, the proposed agreement, finally made public last week, is literally in climate denial: nowhere in its 5,000-plus pages do the words “climate change” appear.

In many ways, the TPP is a broad attack on locally based economies that protect the climate and support renewable energy. Instead, the agreement tilts the playing field in favor of multinational corporations and financial institutions. Fortunately, it’s far from a done deal.

The TPP expands trade by lowering tariffs, which are taxes on imported products like food, shoes, or fuel. But it goes much further than that. It sets a common system of regulations and rules for corporations operating in TPP countries—all designed to accelerate trade. With 30 chapters, the TPP sets rules for things like patents for medicines (and plants), how governments can purchase goods and services, and how the financial sector and food safety can be regulated. It also establishes an independent legal structure to enforce these rules.

While the TPP doesn’t mention climate change explicitly, many of its provisions would have important implications for the climate, aside from the simple fact that expanded trade increases greenhouse gas emissions related to transportation.

Here are a few of the big concerns with the TPP:

1. It expands the rights of corporations to challenge regulations.

The TPP establishes special legal rights of foreign corporations to challenge new regulations that it views could impact future profits. These corporate rights, first established under NAFTA in 1994, would be granted to corporations in all TPP countries. As an example, TransCanada is currently considering whether to bring a NAFTA challenge over President Obama’s rejection of the Keystone pipeline. Other corporate rights cases challenging fracking bans and the rights of oil companies to drill offshore point to how regulations that mitigate climate change could be challenged under the TPP.

The TPP mandates the automatic approval of Liquified Natural Gas (LNG) export permits to TPP countries, a policy the Sierra Club says is likely to lead to an increase in fracking. Japan is already the world’s largest importer of natural gas, and anticipates importing much more if the TPP is approved. Fracking has not only been linked to air and water pollution; the process is a high emitter of greenhouse gases, and it further locks in a fossil-fuel based system of energy over renewable options.

The U.S. Trade Representative is the government agency that represents the United States in trade negotiations. One of its priorities in the TPP has been to eliminate what it calls “localization barriers to trade,” which means striking down government programs that give preference to local or national businesses. But this is not just for other countries—the same rules would apply here in the United States. A recent trade tribunal at the World Trade Organization gives an example of what this looks like in practice: The tribunal ruled against an Ontario policy designed to create local green jobs through locally sourced renewable energy.

Fortunately, the TPP is far from a done deal. While President Obama has signaled his intention to sign it, Congress still has to approve it. A Congressional vote likely won’t come until early spring, though political maneuvering could delay the vote, perhaps until after the 2016 elections.

The TPP also opens the door for an important debate about the values we want our economy to reflect. The deal reinforces and reflects an old economic system tied to fossil fuels and dominated by multinational corporations. That older model runs head-on into growing new economy initiatives and businesses building more localized systems for food, energy, and other services, grounded in racial and economic equity.

A truly new vision for trade would reflect the values of this new economy, not undermine them. Such a vision would start by rejecting the current secretive process, accessible only to corporate advisors, for negotiating future trade deals. The TPP fight is an important political opportunity to reject an outdated economic model, while building power for the new economy many are already creating.