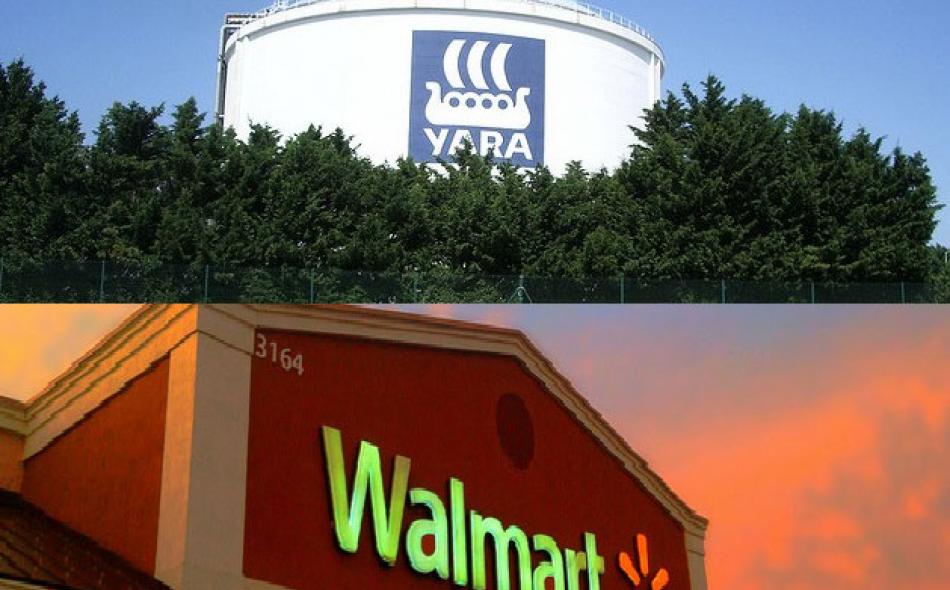 The term “climate smart agriculture” is the product of clever political jockeying of previous climate conferences –first emerging in 2010 after the failed climate negotiations in Copenhagen in 2009. At that time, it was part of an effort pushed by the World Bank and a handful of countries such as the Netherlands and New Zealand to push developing countries to accept agriculture into global carbon markets. Since then, the poor performance of carbon markets (particularly in Europe) as well as the shift in global climate talks toward voluntary pledges to reduce emissions has at least temporarily taken the wind out of the sails for a global carbon market. But that hasn’t slowed the momentum of “climate smart agriculture,” whatever it means.

At a series of side events and announcements this week, CSA was variously described as including: climate-resilient genetically engineered seeds, more precise use of synthetic fertilizers and agroecological practices and organic agriculture. It was described as simply a framework for ideas and information sharing in one context and a bottom-up implementation program in another. The slippery definition of CSA, as well as the formation of the corporate-heavy Global Alliance for Climate Smart Agriculture (GACSA) last year, has been strongly criticized by civil society groups. In an open letter to GACSA earlier this year, civil society groups criticized the Alliance’s lack of social or environmental safeguards and failure to prioritize farmers’ voices, knowledge and rights.

The various sessions on climate smart agriculture here in Paris also provided insight into how different countries and regions are using the term. At a GACSA session hosted by the U.S. delegation, U.S. Agriculture Secretary Tom Vilsack touted both the agency’s soil health program and innovations in new drought and heat tolerant seeds (genetically engineered), greater efficiency in livestock production (referring to confined animal feeding operations) and precision agriculture (a term used to describe the more efficient use of inputs like fertilizers and pesticides in commodity crop production) as climate smart agriculture.

The Costa Rican Agriculture Minister, Luis Felipe Arauz Cavallini, had a different view. He emphasized the word “smart” in CSA—pointing out that this means it is a “knowledge-based” approach to agriculture. He highlighted efforts on agroecology, agroforestry and working within the local ecosystem to help farmers remain profitable while building climate resilience.

There were also sharp differences on how trade intersects with climate smart agriculture. Vilsack made the case, reinforced in a paper released by the agency this week, that increased trade from countries like the U.S. could help countries adapt to disruptions in agricultural production caused by climate change. (A new study by an MIT economist, also released this week, reached the opposite conclusion.) The Costa Rican Agriculture Minister, having been pressured earlier this year by the U.S. Trade Representative to drop his country’s ban on the cultivation of GMOs, stressed that advancing climate smart agriculture will require a re-thinking of trade rules—particularly the sharing of genetic resources. Many countries and the FAO have called for policies that integrate the sharing of genetic resources as an essential part of national climate plans. The Costa Rican minister urged the audience to read the 2013 UN Conference on Trade and Development report, Wake Up Before It’s Too Late, which called for a rethinking of trade rules as they relate to responding to climate change. (IATP contributed a chapter on trade liberalization, volatility and corporate concentration in agricultural markets.)

The absence of a clear definition and growing criticism by civil society of GACSA is starting to have an impact. At an event held about the African Climate Smart Agriculture Alliance, participants stressed that the initiative had nothing to do with GACSA. They described that effort as a bottom-up, implementation effort led by Africans. At the packed announcement of the French-led soil initiative we reported on earlier in the week, participants went to lengths to explain that this was not part of GACSA.

The larger concern with GACSA and “climate smart agriculture” is how it might be inserted within various climate policy mechanisms at the UNFCCC, the associated Green Climate Fund, the FAO and the World Bank—and various national and regional carbon markets. The U.S. Agency for International Development is already integrating “climate smart agriculture” within its programs.

Part of the push on “climate smart agriculture” seems to be an effort to drown out the rising support for agroecology coming from both scientists and social movements. Agroecology, with an established scientific grounding and general consensus of practice, also includes social elements and emphasizes the importance of farmers’ knowledge (particularly women) and community level empowerment. How agroecology and CSA might differ came up in multiple panels here in Paris. As a participant in the African discussion explained, “Agroecology is part of CSA, but not all of CSA is part of agroecology.”

One of the strengths of agroecology is that it has many other benefits besides climate resilience, including an emphasis on food sovereignty, food security and nutrition, and improving livelihoods of smaller scale farmers. Participants at an agroecology panel noted the inherent challenges of fitting the multidimensional aspects agroecology within the rigid, siloed UNFCCC framework of mitigation and adaptation. Climate smart agriculture doesn’t share that challenge. Without definition, it seems to fit anywhere. And that is the CSA's biggest asset for agribusiness—its branding opens the door for greenwashing while distracting from the more transformational changes that are needed to cope with climate change.