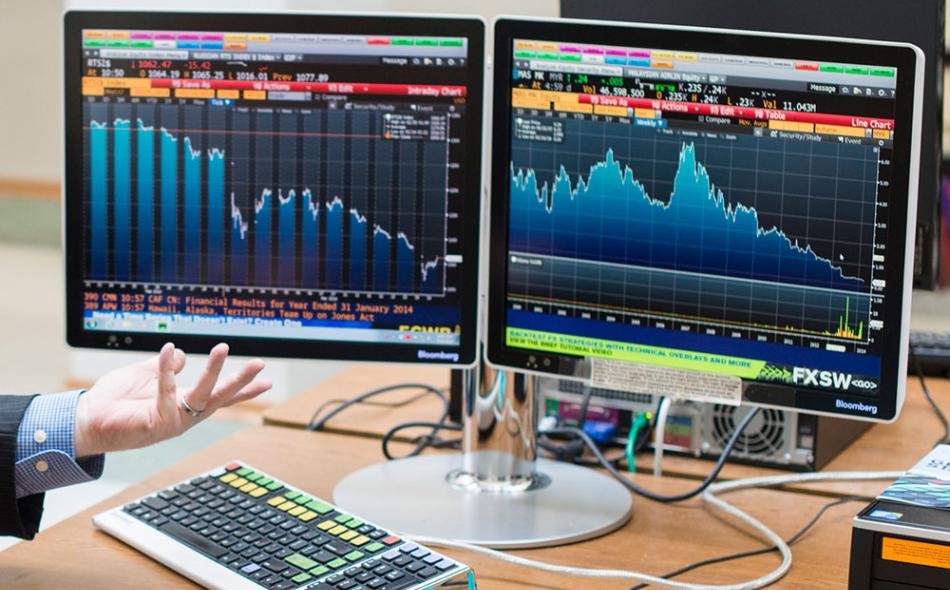 Defenders of high-frequency trading (HFT) claim that they provide necessary capital to commodity derivative markets that enable commercial users of commodities to trade in “liquid” markets, i.e., to manage price risks by buying and selling what they want, when they want. However, HFT orders provide capital to the market milliseconds before computer-automated trading systems (algorithms) cancel those orders. In other words, HFT provides phantom liquidity by emitting trade order price and volume “noise,” but very rarely executed trade information that is usable by commercial traders. HFT administers nearly continuous micro-shocks to price formation.

Farmers and ranchers rely on derivatives markets to set benchmark prices and price trends for forward contracting of grains and oilseeds to local grain elevators and of livestock to stockyards. When HFT “hot money” creates price volatility and price surges with little, if any, relationship to supply, demand and other fundamental factors, derivatives prices no longer help forward contracting. The “hot money” traders induce price volatility not only on U.S. markets, such as the Chicago Board of Trade, but also on Chinese commodity markets.

An April article by a commodity trade advisor at Archer Daniels Midland, the agribusiness mammoth, asked “Who Are the Big Soybean and Grain Buyers?” His answer: “High Frequency Trading, Formula Trading, Algorithmic Trading; Any Name Works.” Then he erroneously added, “High frequency trading, whether it is in commodities, stocks or bonds, is being monitored by the Commodity Futures Trading Commission (CFTC) and the Securities and Exchange Commission (SEC).” Monitoring suggests that HFT data are reported to the CFTC, which would then determine whether HFT entities are complying with CFTC rules. Alas, were it so.

HFT is not yet regulated, so HFT trade data are not reported to regulators. HFT positions are closed out before the end of the trading day making them not subject to position limits, which prevent market manipulation and excessive speculation by non-commercial traders. HFT data are not publicly available but can be purchased from such data-feed services as Thomson-Reuters, which advertises, “2 petabytes of microsecond, time-stamped tick data—dating back to 1996—covering more than 45 million OTC [over the counter] and exchange-traded global instruments.” Two petabytes are more than eight times all the data held in the U.S. Library of Congress, as of 2011.). According to 2013 testimony to the German Parliament by the Brussels-based NGO, Finance Watch, removing rules on minimum tick sizes (price increments) has given HFT trading strategies their competitive edge over trade conducted in historically meaningful price increments.

(Almost five years after the HFT crashed the stock exchanges in May 6, 2010, as chronicled by Michael Lewis’s book Flash Boys, the SEC HFT rulemaking was limited to proposing that HFT traders register with a self-regulating national securities organization. The SEC rule will apply to about 125 firms, who will be required to comply with the best practices of the industry’s Financial Industry Regulatory Authority.)

In December 2015, the CFTC issued a rulemaking proposal on automated trading systems. The proposal stated that the CFTC was not ready to propose a HFT-specific rule, though CFTC staff detected 35 mini-flash crashes in 2015 in oil prices alone. In March, IATP submitted comments on the proposed rulemaking, arguing that both the Dodd-Frank Wall Street Reform and Consumer Financial Protection Act (Dodd-Frank Act) and HFT market events, studied by the CFTC, provide ample justification for the CFTC to write a HFT rule. Under the CFTC’s authority, such a rule should go beyond the CFTC’s proposed rule for addressing the computerized automation of trading of all asset classes under the CFTC’s authority.

Hostility to the Dodd-Frank Act remains intense on much of Wall Street and among the members of the U.S. Congress who receive electoral donations from Wall Street. A complaint of Dodd-Frank derivatives rules “reformers” is to claim that the rules hurt derivatives “end users,” archetypically farmers, but also including corporations who, e.g. package and sell their off-balance sheet debt as an “asset.” A House of Representatives subcommittee hearing on commodity exchanges on April 28 repeated that assertion. Committee members urged the CFTC to abandon its modest proposal, which would require traders to set aside a very small portion of their overall capital against possible losses and to put down a small amount of cash (margin) in order to trade, arguing that the measures would reduce liquidity and increase transaction costs to traders.

“Regulators must be mindful that any new rules do not inadvertently increase market participants’ business costs and constrain liquidity in the marketplace. While the rules may be aimed more towards financial institutions, the smaller end-users like farmers, ranchers, and small businesses rely on these intermediaries to manage their risks,” said Committee Chairman Mike Conaway. As IATP stated in a February blog, it is a time-honored practice for Dodd-Frank opponents to claim they are defending the interests of farmers and ranchers by seeking, for financial speculators, the same regulatory exemptions that CFTC rules already provide for farmers, ranchers and other commodity users.

What is truly strange about the industry-official pleadings of former CFTC Commissioner Scott O’Malia, former CFTC Chairman Walter Lukken and other hearing witnesses is that derivatives trading volume in all asset classes, and particularly in commodities, is at a near record high, indicating there are no liquidity or margin constraints to trading. According to an April report by the World Federation of Exchanges (WFE): “Commodity derivatives volumes increased 26 percent in 2015 [over 2014 volumes], exceeding 4.3 billion contracts traded. This growth meant that commodity futures surpassed single stock options to become the most traded class of derivative contract[s] in 2015.”

The WFE survey aggregates trade data reporting from 64 member exchanges, including those of Chicago, Atlanta and New York. The survey does not include off-exchange over-the-counter (OTC) derivatives, whose lack of adequate capital reserve and margin requirements helped to bankrupt some of the world’s largest financial institutions in 2008-09, when the value of those contracts collapsed. Of course, the survey does not include HFT data, since there are no rules to require exchanges to report that data to regulators.

As the IATP comment on HFT noted, much of commodity trading has shifted from the unregulated commodity index traders, who drove commodity prices and excessive speculation from 2007 to 2010, to today’s likewise unregulated HFT commodity traders. The Wall Street resistance to HFT regulation is part of a broader war of attrition, aided by members of Congress, to prevent implementation of Dodd-Frank at any cost.

In a remarkable policy brief in February, Better Markets showed how the CFTC Chairman Timothy Massad caved in to Wall Street lobbying and refused to advance Dodd-Frank mandated rules in the face of evidence of damage to market integrity both within U.S. borders and in cross-border trading designed to evade CFTC regulation. What makes Chairman Massad’s passivity very hard to comprehend is that he administered the $700 billion Troubled Asset Relief Program (TARP) of emergency loans for losses incurred on derivatives contracts that Wall Street couldn’t sell at any price. Perhaps the $20 billion that he announced TARP earned for the government, after the loans had been paid back, has lulled him into thinking that the next Wall Street-default cascade will result in just another public money mega-management challenge.

But the U.S. Federal Reserve Bank, and not TARP, did the heavy lifting in the Wall Street bailout. The Fed created more than $29 trillion in loans, with practically zero interest, on the full faith and credit of the United States to rescue the biggest U.S. banks, their global subsidiaries and foreign central banks that bailed out their private banks. Critics of the Fed’s 2007-2010 emergency loan program, while recognizing the necessity of the Fed bailout, are asking whether both Wall Street and the regulators have developed an unhealthy dependence on the Fed to rescue them from the next failure to regulate. Could unregulated HFT trigger another series of global financial institution defaults requiring another Fed scale bailout?

HFT is both a technological means to trade and a trading strategy. Unregulated HFT could transmit a new global financial contagion in a matter of minutes, if not seconds. “Kill switches” (shutdown algorithms) are supposed to stop HFT when prices become too volatile even for HFT trader algorithms to manage. By the time the kill switches function, HFT could have distorted agricultural derivatives prices—that are transmitted as the volatile U.S. forward contracting prices that the farmer or rancher has to accept as “fair”—because the next day’s price could be even more volatile and less predictable.

What happens if HFT traders transact unregulated cross-border trades on emerging market exchanges that lack reliable kill switches, but are wired to major market exchanges? Imagine that climate-change related debt is packaged in New York or London and traded as collateralized debt obligations (CDOs) on exchanges in Beijing or Nairobi. The underlying CDO “asset,” the climate-change related debt, is underpriced because corporate clients and banks of the CDO trade instrument inaccurately report or don’t report the climate change value at risk, a problem that the intergovernmental Financial Stability Board is currently surveying. (IATP submitted responses to the survey questions but the FSB has not published responses received.) According to another 2016 survey, “nearly half of the world’s biggest [500] asset owners are doing nothing to mitigate climate risk.” The survey estimates their climate risk exposure at $38 trillion. However, even this colossal sum underestimates the exposure because climate change adaptation costs are not reported in the survey.

HFT technology, by itself, cannot create a global financial crash. However, HFT technology can transmit and amplify a financial crisis when the at-risk value is large enough, volatile enough and unreported in public exchanges, such as underreported and underpriced bank and corporate climate risk exposure. To not regulate HFT because the technology can only transmit and not by itself create defaults among global financial institutions is the Icarus height of hubris.

The next global financial institution bankruptcies will likely not have the same asset class and trading-venue origins as those of the 2008-2009 defaults. What neither the CFTC nor the exchanges nor Wall Street will be able to restore after a HFT-driven market collapse is confidence that the financial markets will not prey on their citizens and that Washington will not condone and even abet these predatory practices. A sustainable economy cannot be built with rigged markets and cowed regulators.