The legacy of lost credibility in fly over country 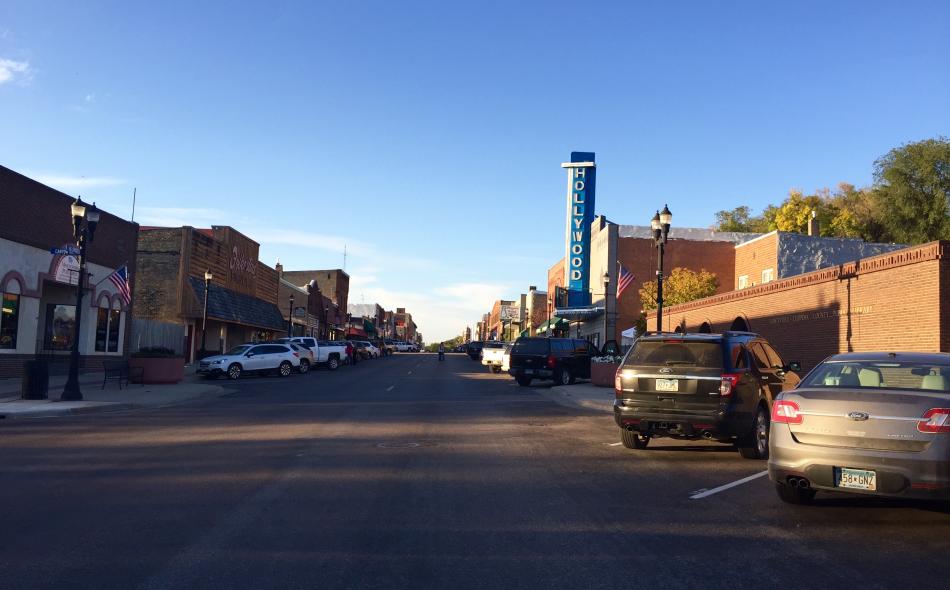 In country star Jason Aldean’s song Fly over States, he overhears first class passengers on a flight from New York to LA, looking down on the countryside and wondering, “who’d want to live down there, in the middle of nowhere.” Aldean then flips the dismissive line into a proud anthem about the middle of the country. Like the song, Donald Trump flipped the predictions of the professional political class and rode a wave of support from many people who felt over-looked in those fly over states all the way to the Presidency.

The power of the so-called fly over states in the election is impossible to ignore. The electoral maps tell the story. A swath of red, often mostly rural, states in the middle and south of the country, bookended by blue states on the coasts. Even within the few Midwest blue states like Minnesota and Illinois,  you can see the stark divide between how urban and rural counties saw the candidates. A look back at the 2012 electoral map tells us this divide is not new, but perhaps wasn’t taken seriously by many Democrats because President Obama won. As the Daily Yonder reports, the long-standing urban-rural voting gap is widening. At least part of this voting gap can be attributed to the Democratic Party’s loss of credibility on a number of core issues that affect the lives of rural communities in those so-called fly over states.

The state of rural politics lies squarely within the condition of the rural economy. Rural communities have higher poverty rates, more persistent long-term poverty rates, and higher child poverty than urban communities. There’s been a steady decline in rural and small town main street businesses, accompanied by a decline in rural business lending. Nearly two out of three rural counties lost businesses, on net, from 2010 through 2014 – even as the rest of the country recovered from the recession. Rural infrastructure is seeing disinvestment and rural bridges and roads are increasingly being closed as public money shrinks. Rural grocery stores are disappearing and there is a significant digital divide that hampers rural businesses without broadband access.

These economic challenges, particularly the loss of rural-based manufacturing, provided the backdrop for Trump’s narrow (yet effective) attacks on free trade deals. In smaller towns, the loss of a manufacturing plant or anchor business hits harder than urban centers with more job opportunities. Though both parties have long supported free trade agreements that took American jobs offshore and kept wages stagnant, it was Bill Clinton who signed the North American Free Trade Agreement (NAFTA); and it was Barack Obama who, having failed to address the problems with NAFTA (as he’d promised to), actually expanded the NAFTA model to create the proposed 12-nation Trans-Pacific Partnership.

There is another storm returning to the rural horizon; an emerging farm crisis. Prices for many commodities are below the cost of production, farm debt to income is the highest in three decades, farmland values are decreasing, and dairy farmers are dropping by the hundreds. These neon warning signs of trouble in the farm economy were virtually absent from the Presidential campaign. The Democratic party platform afforded 80 words to agriculture, which, as John Nichols of the Nation pointed out, fell well short of the attention given by previous Democratic platforms.

Many Midwest farmers still bear the scars of the farm crisis of the 1980s, when farm foreclosures and suicides were part of the countryside. In his seminal 1987 piece, Crisis by Design, IATP’s founder Mark Ritchie documented how government policy steadily eroded programs that focused on keeping farmers on the land through fair prices in the marketplace. Over a series of Farm Bills, agribusiness lobbying drove an intentional push toward fewer, big farms, characterized by the blunt call for farmers to “get big, or get out.” The final dismantling of the older farm programs culminated in the Freedom to Farm Bill of 1995 during President Clinton’s administration. Journalist Sienna Chrisman picked up where Crisis by Design left off, in a recent article explaining how a broken farm policy has set the stage for the emergence of Trump.

Addressing an anti-competitive marketplace for farmers and ranchers, fueled by increasing corporate concentration in the agriculture sector, was a priority for Presidential candidate Obama in 2008. Within his first year, a series of field hearings held around the country were organized by the Department of Justice and Department of Agriculture focusing on the anti-competitive elements of the meat, poultry and seeds markets. But the issue quickly faded and no action was taken.

Trump’s rhetoric on agriculture mirrored the directness of his talk on trade. He charged that there is a “war on farmers” preventing them from being profitable, and laid the blame for that war not on a mix of factors including volatile, anti-competitive markets, but solely on regulators. Regardless of this dubious claim, Trump’s strong words filled the largely silent void left by Clinton and many Democrats when it comes to agriculture.

Health care is another major issue for many farm families and rural citizens cobbling together part-time jobs, unable to rely on the health insurance of larger employers. Rural communities have fewer public resources for emergency medical services, less elder care, and less child care available than urban communities. More than 60 rural hospitals have closed since 2010, and more than 650 are vulnerable to closing. Rural adolescents commit suicide at roughly twice the rate as their urban peers. A recent study from the Center for Disease Control found that of all professions, the risk for suicide was highest among the rural-based jobs of farmers, foresters and fishermen. Rural drug and alcohol treatment centers have less access to highly-trained counselors.

When premium rates from so-called Obamacare jumped recently—it was particularly felt in rural communities. Again, candidate Trump’s strong message, though simplistic, resonated: you can blame the disastrous Obamacare for all your health care problems.

Finally, it’s worth noting that the inability to hold Wall Street accountable for the financial crisis is yet another issue where Democrats have lost credibility with working people. The Obama Administration’s failure to jail a single Wall Street executive in the wake of the financial crisis that caused massive foreclosures and job losses—combined with Hillary Clinton’s secret, lucrative speeches to Wall Street—allowed Trump to paint the Democrats as part of a rigged system that is unable to stand up to Wall Street.

Showing up with real solutions

Much of the post-election analysis has emphasized the inability of Clinton to galvanize the so-called Obama coalition – as if simply mobilizing those non-rural voters in the future will solve all problems. According to Politico’s Helena Bottemiller Evich, the Clinton campaign intentionally decided not to spend resources on rural voters, apparently only assigning a single staff person to rural outreach in their Brooklyn office late in the campaign. A similar disinvestment in rural policy and outreach took place at the Democratic National Committee and the House and Senate rural policy outreach committees, writes rural strategist Matt Barron.

The Democratic and Republican party infrastructures are not alone in overlooking many key rural issues. The private philanthropic community was recently called out by USDA Secretary Tom Vilsack for not funding in rural America. A recent USDA report found that rural communities, which account for 19 percent of the population, received only six to seven percent of foundation grants from 2005 to 2010.

There is an urgent need for new ideas and real solutions to the challenges facing rural America. Last year, Farm Aid held its 30th anniversary concert and brought together leading family farm activists of the 1980s. They talked about the dark economic times of that period and the personal trauma that many families went through, but also the very real danger of violence in the countryside at that time. Mark Ritchie talked about how essential it was “to build a movement based on peace…. If we’re not there to address peoples’ real hurt, if we’re not there to provide a real analysis of where this is coming from and if we’re not there to take real action, the right wing and the extremists will go in and scoop up people who are angry and frustrated—people who’ve done all the right things and served their country in all kinds of ways.”

Climate policy and politics provides some cautionary lessons on what can happen when rural communities are considered an after-thought. Rural economies are particularly natural resource based, whether forestry, agriculture or mining. They are already experiencing climate change—and will have to be part of the solution. Yet, the rural-urban political divide widens when most climate-related proposals start with raising fuel and energy costs for rural families (who already have higher transportation and energy costs), and in some cases, putting rural people out of work as in the case of coal. Rural resistance to climate action has often been viewed as a “messaging” problem by environmentalists—rather than a need to better understand these challenges, and actually involve rural citizens in designing a new approach to climate policy.

In his mea culpa column, Rolling Stone’s Matt Taibbi writes that he and the media misread the election by following polls and experts instead of “hearing things first hand.” Taibbi writes, “Just like the politicians, our job was to listen, but we talked instead.” The New York Times public editor Liz Spayd chastised the paper for being too focused on brief interviews that often created caricatures, rather than taking “readers deeper into the lives and values of the people who just elected the next president.”

Many of the core issues facing rural America are shared by people in all parts of the country: economic uncertainty, wage stagnation, overwhelming personal and college debt, poor health care, and yes, a changing climate. Both political parties have done a good job dividing the country or worse, spreading a wave of apathy, without effectively addressing these issues. It will take a lot of work by people, organizations and institutions to pull it back together.

In his 2015 song Something More Than Free, country singer Jason Isbell sings about another value deeply rooted in so-called fly over states – the honor, dignity and pain of hard work. Isbell sings, “Sunday morning I’m too tired to go to church. But I thank God for the work.” Finding a more just, peaceful and inclusive path forward along with those who feel ignored and that the system is rigged – is the work for all of us.

(Coming soon from IATP—Ideas on what’s next)