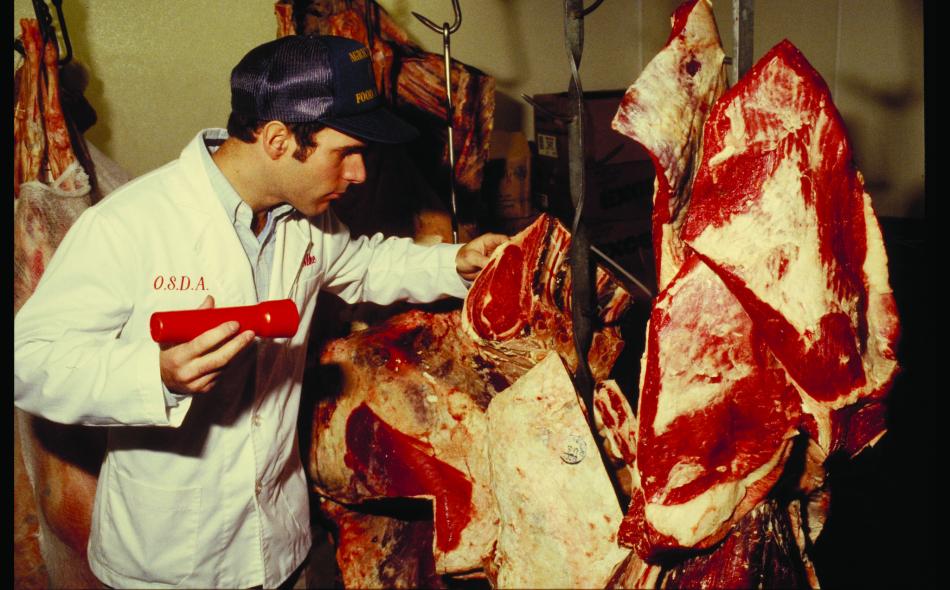 Used under creative commons license from Oregon Department of Agriculture

As you fire up the barbecue during the 4th of July, the U.S. Department of Agriculture helpfully offers tips on how to avoid food poisoning. In “Barbecue and Food Safety,” Thermy, a cartoon figure, advises “It’s safe to bite when the temperature is right!” But how is the consumer protected, if meat is contaminated not by harmful bacteria that can be killed with the right amount of heat, but by veterinary drug residues and chemical meat baths that heat does not treat? The question arises due to recent USDA action to prevent the import of contaminated and adulterated beef.

On June 22, U.S.D.A. Secretary Sonny Perdue announced a temporary import ban on Brazilian beef, noting that the Food Safety Inspection Service (FSIS) had rejected 1.9 million pounds, about 11 percent, of beef shipped by qualified Brazilian exporters to the U.S. since mid-March. Secretary Perdue stated, “Although international trade is an important part of what we do at USDA, and Brazil has long been one of our partners, my first priority is to protect American consumers.” This was a welcome turnaround from his statements a few months before at his Senate confirmation hearing, that if the U.S. were to ban all beef exports from Brazil, he was concerned “there will be retaliation there for our products, maybe around the world as well."

The origins of the rejected beef exports are Brazilian, but as FSIS prepares to privatize meat inspection in U.S. swine slaughter plants to enable faster production line speeds, there are some lessons to be learned about the pressure that commercial objectives can put on meat inspection.  The pressure remains whether meat hygiene is performed by Brazilian government inspectors who turn a blind eye in exchange for a bribe, or performed by U.S. company inspectors, nominally supervised by FSIS officials, who are under pressure to keep production rolling.

FSIS announced that it would re-inspect all fresh beef imports from Brazil following a March 17 raid by Brazilian federal police on the offices and meat refrigeration facilities of the transnational meat firms, JBS and BRF. The companies had bribed at least 20 federal meat inspectors to allow falsification of inspection records and covering up the rotten meat with chemicals. The Folha da São Paulo reported that a police official said that in meat refrigeration lockers, “acids and other chemical products, some of them carcinogenic, were used to disguise the physical characteristics of the products and their smell.”

Brazil defended the safety of its meat exports and the integrity of its meat inspection system at a March 22-23 World Trade Organization meeting. It informed WTO members that only 33 of 2,300 state meat inspectors and 21 of 5,000 meat packing establishments were being investigated, without, however, specifying how many of the total number of inspectors and establishments were involved in exports.

(According to a May 27 Wall Street Journal article, the Brazilian Bank for National Development fueled JBS’ decade long global expansion with billions of dollars of low interest loans.  A plea bargain by the JBS CEO and heir, described how the company bribed about 2,000 Brazilian politicians, including allegedly President Michel Temer, with $150 million, not only to get cheap credit but also weaker regulatory enforcement. JBS began its purchase of U.S. meat processors in 2007 with the acquisition of Swift & Co, and subsequently bought Smithfield’s beef operations in 2008, Pilgrim Pride’s poultry processing in 2009 and Cargill Meat Solutions pork processing in 2015. For a global overview of JBS acquisitions and meat processing ownership concentration globally, see this infographic. R-CALF USA, an independent ranchers’ association, has charged JBS USA and Cargill with anti-competitive business practices in a USDA rulemaking process on competitive injury.)

The problems with Brazilian meat inspections are not new. The USDA banned market access for Brazilian beef for 13 years, only re-opening access in August 2016. Food and Water Watch had called for a halt to Brazilian beef imports in 2010. It said that FSIS re-inspection data on illegal veterinary drug residues in the imported meat pointed to a “systemic problem” that warranted the import ban.

What does the Brazilian meat scandal have to do with FSIS plans to privatize U.S. meat inspection? Food and Water Watch and FSIS meat inspector union chief Stan Painter said in March that FSIS was not re-inspecting all imported Brazilian beef, as announced,  allowing “thermally processed” beef, including chemically bathed beef with suspect drug residues to pass without inspection. This incomplete re-inspection performance becomes worrisome when placed in the context of the FSIS plan to delegate most federal meat inspector duties to company inspectors.

Rod Leonard, former USDA official and IATP board member, wrote a short history in 2013 about the FSIS efforts to privatize meat inspection both in the U.S. and through trade policy food safety “equivalency” agreements. In 2014, Food and Water Watch petitioned FSIS to end beef imports from exporting countries with privatized inspection systems, noting incidents of foodborne illness associated with exporting plants with those systems.  FWW executive director Wenonah Hauter said, “the agency seems to be using the import approval process as a way to weaken meat inspection overall and hasten the arrival of privatized inspection in the United States.”

In 2015, the USDA’s Office of the Inspector General criticized the FSIS plan to allow meat processing employees, instead of government inspectors, to “collect and analyze near real-time food safety data” to build an interactive domestic Public Health Information System (PHIS). The OIG noted that its past recommendations to FSIS had not been implemented. A sample criticism: “FSIS did not implement sufficient internal controls to effectively monitor and evaluate the performance of PHIS, ensure that the system was accessible, that it was operating as designed, and that its information was both complete and accurate.”

The OIG has also complained that, “The Food Safety and Inspection Service’s (FSIS) enforcement policies do not deter swine slaughter plants from becoming repeat violators of the Federal Meat Inspection Act (FMIA). As a result, plants have repeatedly violated the same regulations with little or no consequence.” The FSIS delegation of FMIA authority to private inspectors resulted in repeated violations of the law, which FSIS failed to enforce. It is not necessary to bribe the meat processing inspectors to violate the law, as happened in Brazil. Under the FSIS pilot project (HIMP) for privatizing inspection in swine slaughter houses, the company inspectors are doing their job, since they know that repeated violations of federal law will have no consequence.

Despite the existing inspection problems, pressure continues to build to increase line speed under an FSIS proposed rule to expand a HIMP to delegate FSIS meat inspection duties to company inspectors. Four U.S. federal inspectors have submitted affidavits stating they cannot do their job because of the HIMP pilot project increased production line speeds in five swine slaughter plants that the OIG characterized as repeated rule violators.  The National Pork Producers Council supports and eagerly awaits the expansion of HIMP to all U.S. swine slaughter plants to increase the plants’ slaughter capacity.

Notwithstanding the OIG’s critical reports and the federal inspectors’ affidavits, some foreign governments may seek to emulate the FSIS inspection model to increase slaughter capacity in their country’s plants, to reduce inspection costs and better compete with U.S. pork exporters.