Rally against the Tar Sands and Free Trade 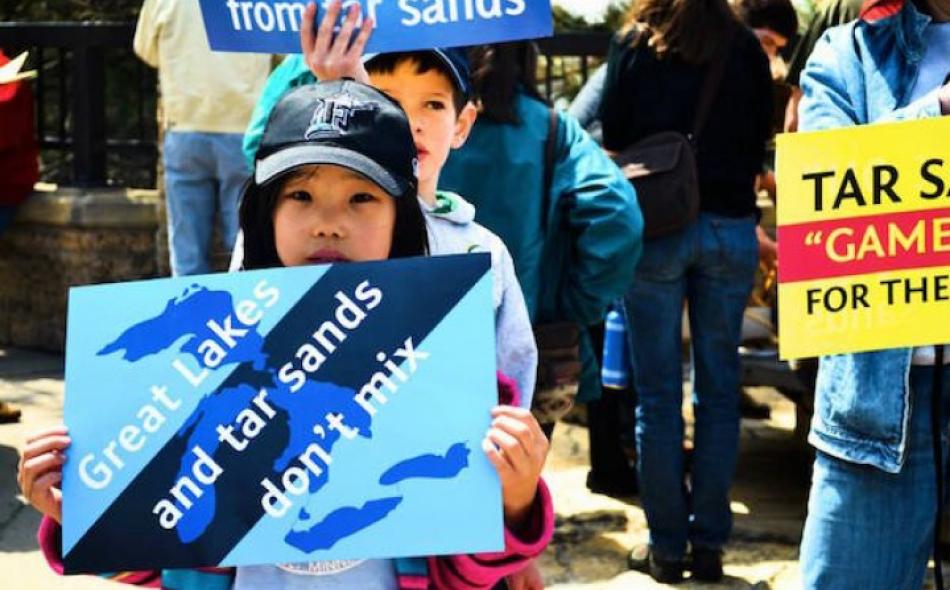 Tomorrow, June 6, thousands of people from across the Great Lakes region will come together for the Tar Sands Resistance March in St. Paul, MN. This will be the largest action against tar sands to date in the region; speakers include Bill McKibben, Winona LaDuke, and Keith Ellison among others. Tar sand extraction and distribution is driven largely by trade policy set out in NAFTA. Former Canadian Prime Minister Brian Mulroney has been quoted as saying, “… a major tenet of NAFTA … the U.S. was guaranteed unfettered supply in exchange for unfettered access by Canadian exporters to its market.” The articles pertaining to energy and corporate rights found within NAFTA highlight the shortcomings of our current trade system. You don’t have to be an environmentalist to march against the tar sands. If you believe in fair trade, national sovereignty and human rights, you should attend this rally.

Energy independence4 and increasing global exports are among the justifications given for mining the tar sands. While that reasoning may seem laudable to some, it comes at the expense of national sovereignty and the environment. The profitability of tar sands mining and processing is driven and underwritten by questionable policy. Both domestic (Generic Oilsands Royalty)5 and international trade policy (NAFTA article 605 and 1110)6,7 have helped establish markets for this environmentally damaging form of costly unconventional energy.

There are three concepts at the center of the trade debate on tar sands:

The proportionality clause – guaranteeing the U.S. the previous 36 month average of energy exports from Canada - is unique in that there is no similar clause in any other trade agreement, nor did NAFTA’s other trading partner (Mexico) sign on to it.8 Projections by the Parkland Institute show that even a 10-percent decrease in production would cause a domestic shortfall due to trade obligations, leaving Canadians the options of either importing oil from other oil exporters or importing their own oil back from the U.S. Under the proportionality clause, reductions in production from resource management policy,9 climate change mitigation policy or even reductions caused by natural disaster do not release Canada from these trade obligations.

Article 1110 concerns expropriation, a Canadian term comparable to eminent domain or seizure of property in the United States. Interpretation of article 1110 forms the basis of many Chapter XI environmental regulation disputes. Affected parties have construed expropriation as a perceived loss of profit due to government regulation, which they argue constitutes an indirect expropriation and therefore a government seizure. This “expropriation” of projected profit entitles corporations to sue governments over the regulations they feel are restrictive. In the past this clause has been used to undermine environmental rules. (i.e. Ethyl Corporation v. Canada, Metaclad v. United Mexican States, S.D. Myers v. Government of Canada, Sun Belt Water Inc. v. Government of Canada, Waste Management, Inc. v. United Mexican States)

Canada and U.S. pressure to water down EU emission standards, due to the potential transatlantic energy trade partnerships created through the Transatlantic Trade and Investment Partnership (TTIP) and the Comprehensive Economic and Trade Agreement (CETA)

Günther Oettinger, EU energy commissioner, stated in a speech at the Center for Strategic and International Studies. Washington D.C., “Ensuring a reliable and steady flow of energy is a fundamental requirement for our modern economies and the high quality of life that we have achieved today… And with the growing energy potential of the North American continent, there is the real possibility of a renewed trans-Atlantic energy trade.”

Standing in the way of a tar sands trans-Atlantic energy trade is EU climate policy aimed at lowering transportation fuel emissions. This has been recognized by North American governments and oil companies alike and has been the focus of lobbying campaigns meant to weaken emission standards and eliminate the ability of governments to promote fuels that emit fewer GHGs. The EU committed to reducing GHG emissions by 20 percent of 1990 levels by 2020 at the 2009 Copenhagen climate conference (COP 15). In line with their Copenhagen Accord commitments the EU would like to reduce overall life cycle GHG emissions for transportation fuels by six percent. The 2009 Fuel Quality Directive (FQD) was intended to give fuel suppliers a methodology for calculating current GHG fuel emissions and a system of fuel categorization that aids in meeting GHG reduction targets. However, increased lobbying by Canada and the U.S. has effectively stalled the implementation of FQD categorization of fuels.

Join us tomorrow in St. Paul as IATP will be marching against tar sands and free trade’s dysfunction embodied in these three concepts: