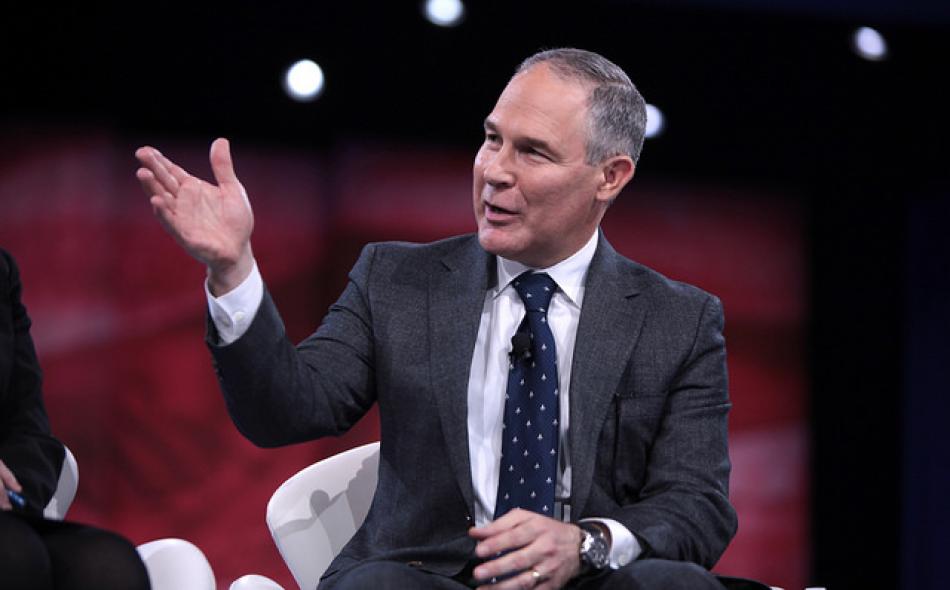 President Donald Trump’s nominee to head the Environmental Protection Agency (EPA) has a record of hostility for environmental and public health protection at both state and federal levels.

President Donald Trump’s nominee to head the Environmental Protection Agency (EPA) has a record of hostility for environmental and public health protection at both state and federal levels. Oklahoma Attorney General Scott Pruitt may be best known for suing the agency he hopes to lead 14 different times in an attempt to block EPA rules protecting the air and water. In his own state, Pruitt disbanded the Attorney General’s environmental protection unit and repeatedly sided with agribusiness and energy interests over protecting the environment.

In the 2016 election Pruitt supported and, according the Oklahoma Farm Bureau, inserted important language into a resolution that would have changed the state’s Constitution to prevent the state legislature and local governments from protecting their land and water from agriculture-related pollution “without a compelling state interest.” This so-called Right to Farm resolution was soundly rejected by Oklahomans at the ballot box.

A coalition including many family farmers raised objections to the resolution, arguing that its broad language went too far toward making it difficult to regulate out-state and foreign-owned corporations like the Chinese-owned hog giant Smithfield and Brazilian-owned beef company JBS. Both operate in Oklahoma. Objections also centered on how the resolution would restrict the state’s ability to protect its water, particularly related to a series of discharges from large hog, cattle and dairy waste lagoons in the state. According to theTulsa World Herald, the resolution would “give enormous legal protections to big-time corporate agriculture.”

The proposed Right-to-Farm law is largely drawn from similar versions as part of a national strategy led by the American Legislative Exchange Council (ALEC). ALEC develops model state legislation designed to benefit corporate interests, such as laws to limit citizens’ ability to sue when injured by dangerous products from chemical companies; laws to curb workers’ rights; and laws restricting regulation of hydraulic fracking. ALEC praised Trump’s selection of Pruitt for the EPA calling him “just the right person to bring fresh leadership and much-needed reform to an agency currently out of control.”

The Right to Farm resolution wasn’t the only time Pruitt has carried water for agribusiness. In another case reported on by the New York Times, Pruitt chose to refrain from aggressively seeking damages from poultry companies polluting Oklahoma waters. That decision was reached after Pruitt received major contributions from representatives of the poultry industry, according to the Times.

In 2014, Pruitt stepped in again on behalf of agribusiness, veering well beyond the borders of Oklahoma to join other state Attorneys General in an attempt to block an EPA deal to clean up the Chesapeake Bay from farm-related runoff from fertilizers and animal waste.

Pruitt’s well-documented disregard for environmental protection appears to be precisely what the new administration is looking for in a new head of the EPA. Pruitt’s close ties to the oil and gas industry are evident in his partnerships with energy industry donors. During his confirmation hearing before a Senate committee he refused to recuse himself, should he head the agency, from future legal action pertaining to the 14 lawsuits has already brought against the EPA. The Center for Media and Democracy sued Pruitt on February 7, after waiting two years for him to turn over at least 3,000 emails and other correspondence with oil and gas companies.

Pruitt’s record on climate change also demonstrates his lack of suitability to head the EPA. In line with his well-funded allegiance to the fossil fuel industry, Pruitt has denied the scientific consensus on human contributions to climate change. Not a passive denier, he led efforts by the Republican Attorneys General Association (RAGA) to challenge the Clean Power Plan, which aims to reduce air pollution and promote renewable energy production. The flexible state-specific plan has the potential to benefit rural communities in the country’s transition to renewable energy. RAGA has raised over $4 million from the fossil fuel industry since 2014 – much of it linked to opposing the Clear Power Plan and stalling investigations into ExxonMobil’s efforts to promote climate change denial.

In an embarrassing incident that revealed Pruitt’s intimate relationship with polluters, a 2014 letter he wrote to the EPA and Department of Interior on his Oklahoma Attorney General letterhead opposing efforts to regulate mercury air pollution was found to have been written by the oil company Devon Energy. Pruitt had simply cut and paste.

President Trump’s selection of Pruitt to run the EPA is a major blow to efforts to address water and air pollution, climate change, and will hinder transition from polluting fossil fuels toward cleaner renewable energy. The nomination will further entrench corporate agribusiness interests at the expense of protections for rural water and land. His nomination should be swiftly rejected.