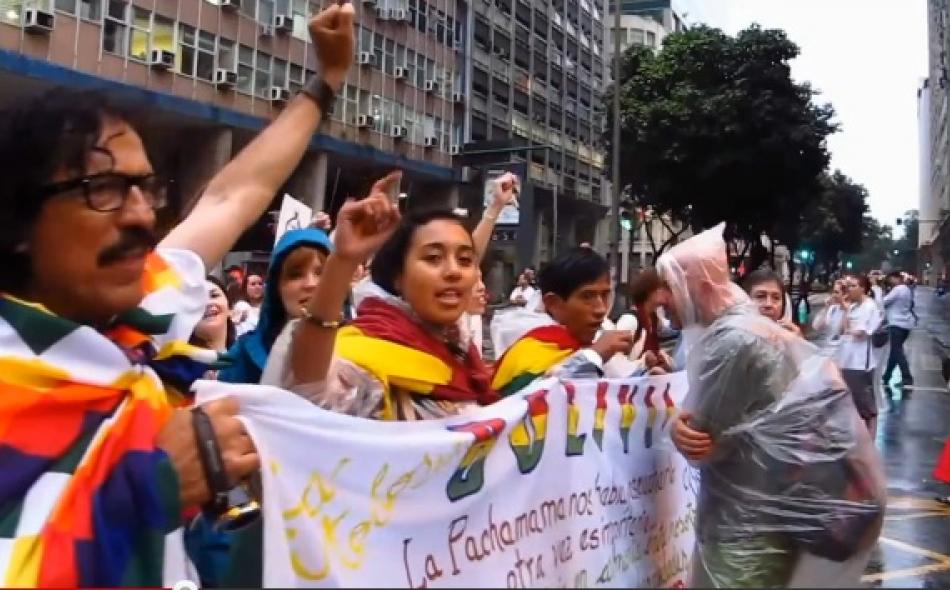 Today is the last day of the U.N Conference on Sustainable Development that is taking place in Rio de Janiero from June 20 to 22 of June. Over 100 heads of states (with a notable absence of Barack Obama), and governments are in Rio, participating in the plenary meetings and High-level Round Tables as a prelude to adopting the negotiation document. On the final day of the last preparatory committee, on the evening of June 15, the negotiations had come to a standstill. Brazil however, as a host nation, did not want Rio+20 to end in failure. As we suspected, Brazil opted to provide the negotiators with a new, watered-down draft that would cause minimal disagreements.

Brazil’s draft was negotiated over for the next four days and the new document. “The Future We Want,” was agreed upon by June 19, a day before the heads of states arrived and was called the “final draft text.” Before the high-level segment even started we had a text that was adopted by the negotiators, all but waiting for the endorsement of the final plenary. By the end of the day today we will know to what extent this document is tweaked to accommodate the interests of specific constituencies, but as of now the document remains more or less unchanged.

From June 16 to 19, the Brazilian government organized a series of sustainability dialogues, including those on water food and energy. The discussion on food security had an exceptionally strong panel with several advocates of agroecolgy. However, what was said in the dialogues was not reflected in the negotiating text and it is disappointing to see no reference to agroecology in this final draft.

The draft document is also an attempt by Brazil to satisfy everyone: It provides references to various concerns raised by governments but remains silent on implementation. Thus, the Rio principles are upheld, with a special reference to common but differentiated responsibilities, meaning that developed countries who have caused most of the damage to the environment historically have a special responsibility to remedy this harm (this was a point of contention during the negotiations).

Ecosystem services are referred to but the “green economy” is not as prioritized as it was in the earlier document (again another point of contention because of how it threatened to commoditize nature). The draft does not get into implementation mechanisms. To the extent that it does, it seems to rely on corporate-led initiatives to deliver on sustainable development goals.

I was happy to note that both the right to food and the right to water were referenced in the draft. I was also happy to learn yesterday afternoon that as a result of the decisions taken in a meeting of women leaders and heads of states, there is a good chance that women’s reproductive rights will get a mention in the final document. This is indeed a welcome development. Despite these nods to human rights, the document is silent on implementation mechanisms and commits no funds to the realization of these rights.

It remains the task of those committed to promoting a rights-based approach to development to insist on follow-up action both nationally and internationally.  This will be the biggest challenge for civil society as national governments in most countries are captured by corporate interests.

Yet as I marched along with tens of thousands people who had gathered for the People’s Summit in Rio, the collective energy of civil society gives me hope that better outcomes are possible.