2020 – A year and decisive decade of climate reckoning: What policymakers do next on agriculture matters

This blog is the second in a series of two posts about agriculture in the U.N. climate negotiations and what to look for in 2020. Read the first blog post here.

The calamitous climate effects unraveling before us have been predicted by climate models since the 1970s. After 50 years of failing to act, the IPCC gives us 10 more years to turn things around. You wouldn’t know it from the recent climate talks, COP 25, in Spain though. Countries were meant to increase their climate pledges to keep warming to 1.5˚C as per the Paris Agreement. Instead, they spent their time watering down commitments. Far from closing the emissions gap, we are heading towards a 3˚C world if current pledges are implemented. U.N. Environment Programme (UNEP) projects that at the end of 2020, countries should have pledged a threefold increase of their climate targets to keep warming limited to 2˚C and fivefold for 1.5 ˚C.

With our food system emitting 21-37% of total global emissions, agriculture will have to be part of the solution, not least because everyone eats, but also because so many people’s livelihoods depend on it. The percentage of people employed through agriculture remains upwards of 30% in most developing countries, employing as many as 50-80% in many of them. Nearly half (45%) of the global population is still rural in 2020. Equity, human rights and social justice must therefore be an essential part of any climate action on agriculture.

As we head into 2020, there is a lot of talk about becoming “climate neutral” by 2050, also called “net zero.” Net-zero implies that while reducing GHGs in the coming decades, we remove an overall “net” amount that results in zero emissions by 2050. Proposals for climate neutrality will include land – what we do with it and what grows on it – as an important source of “removal” of emissions. In December, 27 EU member-states (minus Poland) agreed to a net-zero EU target by 2050. This means also setting ambitious enough targets for 2030 to meet the long-term goal. 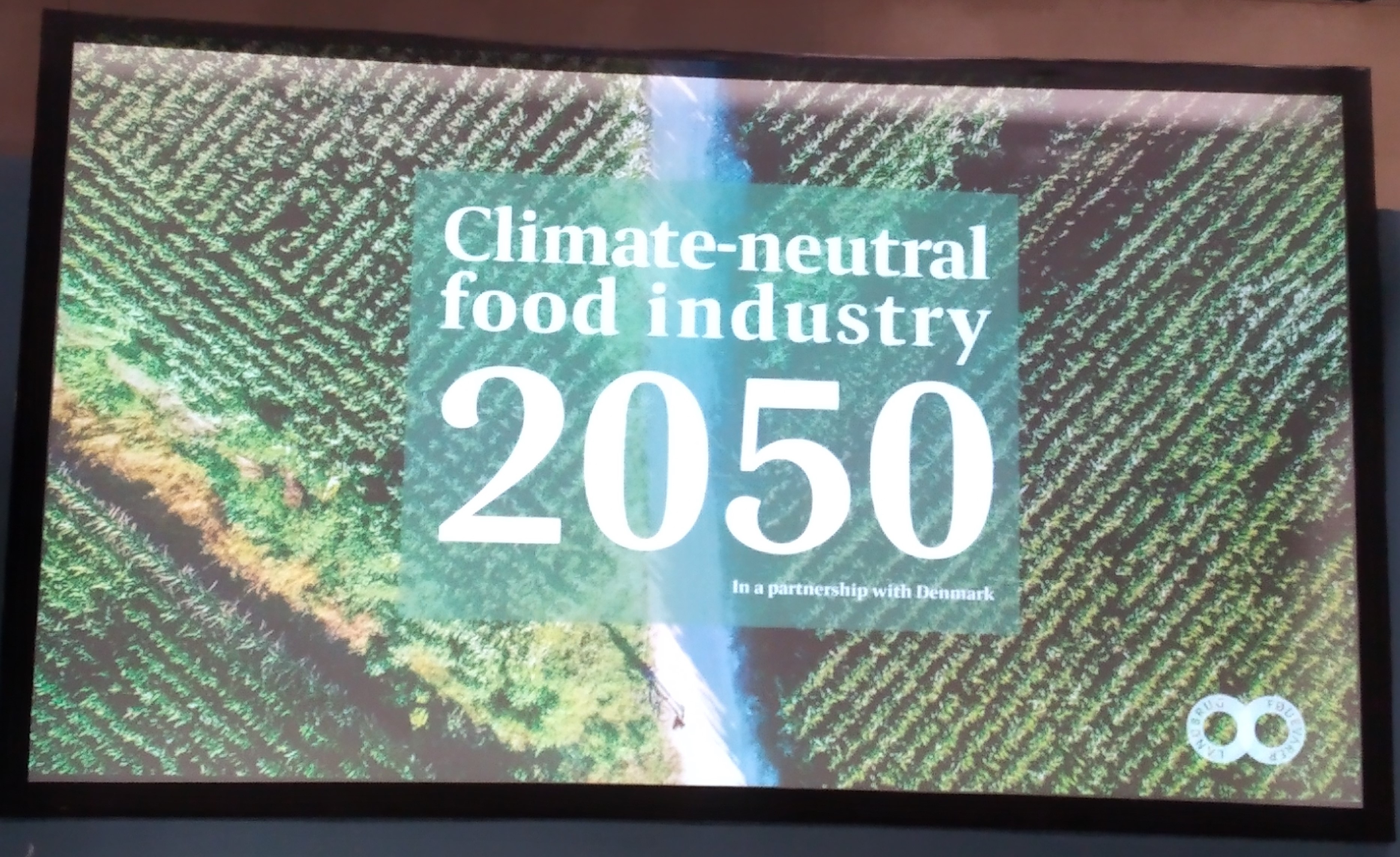 Enter agriculture and land use.

Many future looking scenarios propose getting to net-zero with false solutions. These include shifting to burning biomass instead of fossil-fuels for our energy use. Another proposal is to set aside large tracts of land to form an enormous land based-carbon sink, also known as “BECCS.” Biofuels and biogas are also offered as “renewable energy” options. Various agribusiness proponents are advocating for technological fixes such as biogas digesters (used to process animal manure into gas for heating or energy), methane inhibitors (new feed additives that may result in cows, sheep or goats burping less and contributing less methane in the atmosphere), “precision” agriculture with better management of synthetic fertilizer to reduce the potent greenhouse gases nitrogen oxide and emissions intensity reduction (lowering greenhouse gases emitted per unit of food produced). The list goes on.

The financial incentives attached to many of these proposals often rely on government-run carbon markets. Disagreements on the rules for financing and the role carbon markets could and should play to meet the Paris goals was a major reason governments failed to reach a successful outcome at COP 25. But even as this deadlock continues, corporations are moving ahead with voluntary or government-led carbon market schemes that will allow polluters to continue emitting. For instance, Smithfield, the mega-giant of the meat industry, is using biogas digester technology to generate carbon credits by converting massive quantities of pork manure into biogas, some of which it can sell to Duke Energy. This is the same Duke Energy that has just been ordered by the U.S. state of North Carolina to clean up 80 million tons of coal ash, in “what state regulators are calling the biggest cleanup of its type in U.S. history.” Smithfield also announced a joint venture with Dominion Energy in 2018 to produce gas out of factory farms. Dominion Energy is also a massive coal user, with 40% of its energy generated by coal. Meanwhile, Smithfield can publicize its commitment to GHG reductions, never mind the massive environmental and social impacts, paid for by taxpayers, of its production in North Carolina and elsewhere. The company publicizes that the digesters help reduce its emissions for every kilo of meat it produces, obscuring its rising climate footprint as it processes more and more animals each year. The digesters are a win-win for two highly emitting industries – Big Meat and electric utilities using fossil fuels. That such false solutions lend environmental credibility to corporations and allow them to continue increasing their total emissions is a lose-lose for the planet.

Another government, the U.S. state of California, has allowed giant industrial dairies to earn offset credits through biogas digesters and is helping to finance these expensive technologies. These dairies, in turn, are menacing communities by destroying air quality, polluting water and land. How we pursue “net zero” in the next 10 years, therefore, matters a great deal. For biodiversity, for communities, for livelihoods and for our future.

Carbon markets for soils is another smoke and mirror scheme that we thought was delegitimized sufficiently when the UNFCCC considered it 10 years ago. IATP found that carbon consultants would reap hundreds of thousands in cash for quantifying it, while Kenyan farmers in a World Bank funded pilot (which is still ongoing) would earn as much as $1 per year. In a 2019 presentation at the UNFCCC workstream on agriculture called the Koronivia Joint Work on agriculture (KJWA), the World Bank representative updated us on this project – the Kenyan farmers are now believed to be getting about $15 per year. The monitoring, verifying and reporting that underpins these trading schemes is extremely costly and the science backing it, extremely thin. In the end, farmers seemingly benefited from the change in agricultural practices, however, the money spent by the World Bank could have gone directly to the farms rather than consultants, increasing significantly the social and environmental impact. Soil carbon is impermanent, easily altered with human and natural disturbances and can vary widely depending on the field. Money spent on carbon consultants is better spent directly investing in farmers and farms to build soil health, climate resilience and biodiversity. This would deliver numerous added benefits to rural communities and the environment and create a much greater likelihood for carbon sequestration. In June 2019, many governments at the KJWA endorsed the notion of soil carbon accounting, even as the scientific evidence only gets stronger on the uncertainty of accounting. It’s a good way for governments to claim emissions reductions through offsets, but terrible for actually reducing emissions and wasteful of precious climate finance.

What should happen next on agriculture?

Two major scientific reports published in 2019 provide a critical scientific guidepost on agriculture and climate: the IPBES Global Assessment that underpinned the important link between biodiversity and the climate crisis and the IPCC Special Report on Land. We need biodiversity to have a fighting chance to beat climate change. Climate change, in turn, is contributing to biodiversity loss. The two are an integral part of our planetary survival.

But central to any international, national and state-level solution to agriculture are food growers and food workers themselves. Many of them are part of a growing movement for agricultural and food system transformation. And luckily, many of the solutions they propose for better incomes, animal welfare, and biodiversity help to mitigate climate change and build climate resilience. Their voices must be an integral part of the governmental deliberations in ramping up climate ambition in agriculture and in national adaptation plans. At the same time, governments have to reign in the corporate GHG emitters.

At the end of 2020, the UNFCCC’s KJWA will make a decision on how governments should address agriculture. Civil society groups can engage in the coming year to influence this process – the next two KJWA workshops are in March and June. Engagement doesn’t have to be limited to the UNFCCC process, however. Our elected officials, agriculture and environmental ministries back home need to hear our voices.

In the coming decade, agribusiness with a prominent seat at all relevant U.N. processes and government decision making will advocate for its own solutions. It is our job in the next 10 years to reshape this discourse because we all eat and nearly half of the world’s population still depends on agriculture for their livelihoods. We must ensure that our governments’ policies put food growers and workers at the heart of agricultural solutions to our climate crisis. They can start by redirecting public funds away from industrial agriculture, regulating its excesses and supporting rural areas in regenerating their soils and communities.