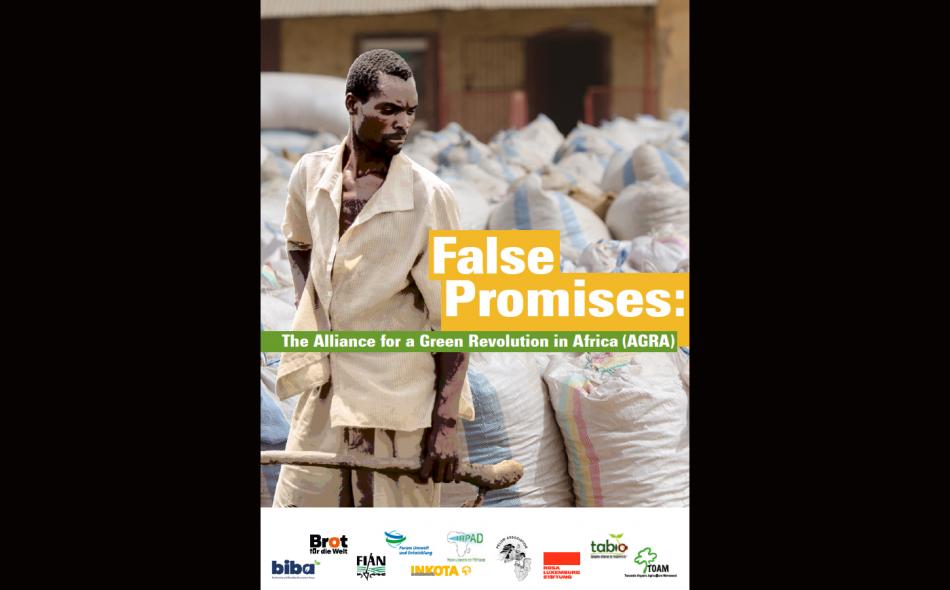 Used under creative commons license from Timothy A. Wise

Fourteen years ago, the Bill and Melinda Gates and Rockefeller foundations launched the Alliance for a Green Revolution in Africa (AGRA) with the goal of bringing Africa its own Green Revolution in agricultural productivity. Armed with high-yield commercial seeds, fertilizers and pesticides, AGRA eventually set the goal to double productivity and incomes by 2020 for 30 million small-scale farming households while reducing food insecurity by half in 20 countries.

According to a new report from a broad-based civil society alliance, based partly on my new background paper, AGRA is “failing on its own terms.” There has been no productivity surge. Many climate-resilient, nutritious crops have been displaced by the expansion in supported crops such as maize. Even where maize production has increased, incomes and food security have scarcely improved for AGRA’s supposed beneficiaries, small-scale farming households. The number of undernourished in AGRA’s 13 focus countries has increased 30% during the organization’s well-funded Green Revolution campaign.

"The results of the study are devastating for AGRA and the prophets of the Green Revolution," says Jan Urhahn, agricultural expert at the Rosa Luxemburg Stiftung, which funded the research and on July 10 published “False Promises: The Alliance for a Green Revolution in Africa (AGRA).”

A Record of Failure

As I document in my background paper, “Failing Africa’s Farmers: An Impact Assessment of the Alliance for a Green Revolution in Africa,” AGRA has received nearly $1 billion in contributions, the vast majority from the Gates Foundation but with significant contributions from donor governments, including from the United States, United Kingdom, Germany and other countries. AGRA has made over $500 million in grants to promote its vision of a “modernized” African agriculture freed from its limited technology and low yields. The campaign has been fortified with large financial outlays by African governments, much of it in the form of subsidies to farmers to buy the seeds and fertilizers AGRA promotes. These subsidy programs have been estimated to provide as much as $1 billion per year in direct support for such technology adoption.

AGRA has been controversial from the start. Many farmers’ groups on the continent actively opposed the initiative, pointing to negative environmental and social impacts of the first Green Revolution in Asia and Latin America. Since AGRA’s founding, scientists and world leaders have gained growing awareness of the limitations of input-intensive agricultural systems, particularly to mitigate and adapt to climate change. The U.N. Intergovernmental Panel on Climate Change in 2019 documented the many ways industrialized agriculture contributes to climate change, calling for profound changes to both mitigate and help farmers adapt to climate disruptions.

Surprisingly, as AGRA reaches its self-declared deadline of 2020, the organization has published no overall evaluation of the impacts of its programs on the number of smallholder households reached, the improvements in their yields and household incomes or their food security, nor does it make reference to its goals or progress in achieving them. Neither has the Bill and Melinda Gates Foundation, which has provided two-thirds of AGRA’s funding. This lack of accountability represents a serious oversight problem for a program that has both consumed so much in the way of resources and driven the region’s agricultural development policies with its narrative of technology-driven, input-intensive agricultural development.

Our research seeks to fill that accountability gap. Unfortunately, AGRA declined our request to provide data from its own internal monitoring and evaluation of progress. In the absence of data on AGRA’s direct beneficiaries, we use national-level data from 13 AGRA countries through 2018 on production, yield and area harvested for most of the region’s important food crops to assess the extent to which Green Revolution programs are significantly raising productivity. We also examine data on poverty and hunger to gauge whether there are signs that smallholder farmers’ incomes and food security are improving across the region at levels commensurate with AGRA’s goals of improved farmer welfare.

We found no evidence that productivity, incomes or food security were increasing significantly for smallholder households. Specifically, we found:

Rwanda, widely considered an AGRA success story thanks to rising maize production and yields, illustrates AGRA’s failings. Overall productivity improvements across staple crops have been weak, while the number of undernourished has increased 15% in the AGRA years. Rwanda’s former Agriculture Minister, Agnes Kalibata, now heads AGRA and was recently named to lead a planned U.N. World Food Summit in 2021.

"AGRA's questionable approach cannot provide the necessary impetus for the U.N. Summit on Food Systems,” says Stig Tanzmann, agricultural expert at Bread for the World and one of the report’s authors.

That summit should instead actively consider agroecology and other low-cost, low-input approaches, which have shown far better short and long-term prospects than high-input Green Revolution practices. One University of Essex study surveyed nearly 300 large ecological agriculture projects across more than 50 poor countries and documented an average 79% increase in productivity with decreasing costs and rising incomes. Such results far surpass AGRA’s.

"AGRA is a vicious circle that drives small-scale food producers further and further into poverty, destroying their natural resources," says Mutinta Nketani, an agricultural specialist from PELUM Zambia and author of the report’s case study on Zambia.

As the report makes clear, as AGRA reaches its 2020 deadline, it is time for African governments and the donor community to change course. The report recommends that:

As former FAO Director General Jose Graziano da Silva indicated, “We need to promote a transformative change in the way that we produce and consume food. We need to put forward sustainable food systems that offer healthy and nutritious food, and also preserve the environment. Agroecology can offer several contributions to this process.”

Watch a recording of a webinar hosted by HOMEF in collaboration with AFJN on August 6, 2020 on which Timothy A. Wise discusses his research and the report.