International carbon markets would allow countries struggling to meet their emissions reduction goals to purchase offsets from other countries that cut their emissions more than they pledged. Agricultural offsets, which permit carbon sequestered in the soil to act as an offset for emissions elsewhere, are increasingly being integrated into carbon markets. Unfortunately, agricultural offsets are a false solution. The tools to measure soil carbon to the degree of accuracy and reliability that a market would require do not exist currently. Soil carbon storage is also extremely impermanent; any carbon sequestered in the soil can be released with a change in land management practices or through severe weather events.

In addition to measurement and permanence uncertainties, agricultural offsetting projects are extremely expensive. The FAO estimates that establishing market infrastructure for monitoring, reporting and verifying agricultural carbon credits would cost 3.8 billion euros for the agriculture sector in 2030. These expenses are passed on to the farmer; in the Kenya Agricultural Carbon Project, farmers are expected to receive just over one dollar per year over the 20 years of the project. The main benefit for farmers is presented as increased yields; however, participation in these projects can lock farmers into agricultural practices dependent on synthetic inputs that cost money and cause environmental degradation. Given the high transaction costs associated with many agricultural offset projects, they tend to work best for large-scale farms, which could contribute to further consolidation in agriculture.

Farmers suffer consequences beyond low and volatile prices. Some projects increase farmers’ dependency on agribusiness by requiring them to use proprietary seeds or chemical inputs. This can prevent farmers from using traditional knowledge of fighting pests and fertilizing soils and creates a dependency on the multinational corporations that sell the inputs. Farmers may also come to depend on certain companies to buy their products. In the Mount Elgon project in Kenya, Brookside Africa committed to buying all the milk produced by farmers 10 years. Once the project ends, farmers could find themselves without a buyer. This also undercuts communities’ ability to develop local markets for local populations.

Agricultural offset projects put the impetus on farmers, especially in the Global South, to change. Putting the responsibility of mitigation on farmers lets companies off the hook for reducing emissions along the entire supply chain. This is especially problematic for offset projects in the Global South, where farmers are the least responsible for causing climate change and are suffering most from its consequences.

Negotiators at the UNFCCC should exclude agriculture from carbon markets under the Paris Agreement. While farmers need to be supported in transitioning to climate-friendly practices, using carbon offsets to compensate for emissions elsewhere does not bring about the necessary changes. Governments should invest in policies and programs that incentivize agroecology, without allowing the achieved emission reductions to justify pollution elsewhere. 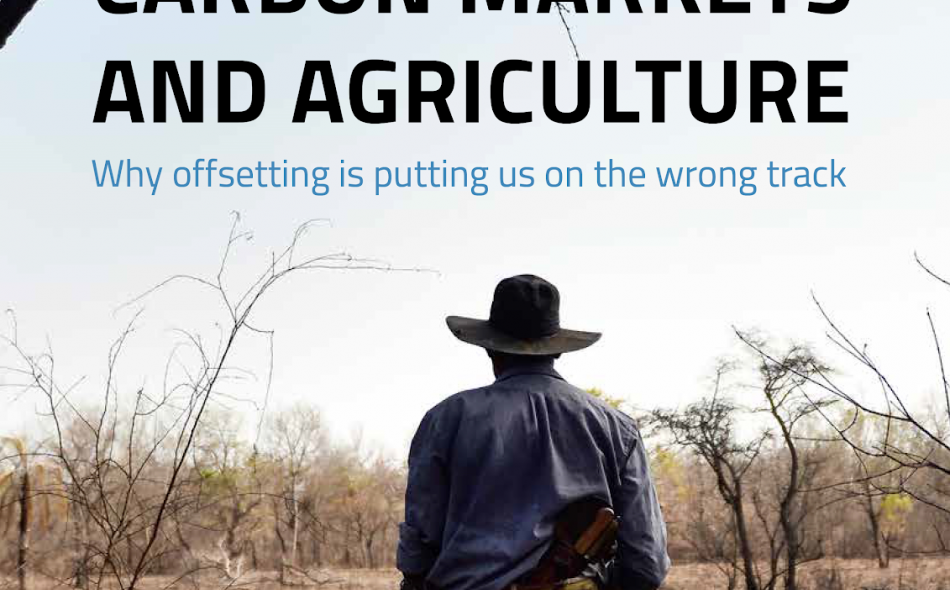