COP 24: Where are countries with dairy emissions?

In the last ten years, dairy emissions have risen by 18 percent, according to a new study about to be released by the UN Food and Agriculture Organization (FAO)’s Climate and Environment Division. It is a study they conducted in close cooperation with the dairy industry, or rather the Global Dairy Platform (GDP), a body that was formed by four of the biggest global dairy giants: Dairy Farmers of America (headquartered in the U.S.), Fonterra (New Zealand), Royal Friesland Campina (the Netherlands) and Arla (the Netherlands). They formed the Platform in 2006 after the release of Livestock’s Long Shadow, the first damning assessment of the livestock sector’s contribution to global greenhouse gas (GHG) emissions, released by the FAO in the same year, according to the GDP’s Donald Moore.

This was the morning event IATP attended Tuesday at the climate talks (COP 24) in Katowice, Poland. The GDP, together with the Global Research Alliance (GRA) on agricultural greenhouse gases, hosted the event featuring the FAO’s assessment of global dairy emissions between 2005-2015, and included government representatives from Kenya and Uruguay. The industry’s membership in the GDP has since grown to 95 members, including China’s dairy giant Mengniu, the U.S.’s Land O’Lakes, Inc., and the International Dairy Federation as part of its Board and Operational Committee. The GDP’s main aim appeared to be to demonstrate that the industry intends to address the climate change challenge while ensuring they can continue to supply dairy to what they claim is six billion people currently consuming it. With the help of Rabobank, they have designed the Dairy Sustainability Framework that plans to address the UN’s sustainable development goals, as well as dairy’s livestock emissions. How? Why, by reducing emissions intensity of dairy production in developing countries, of course.

FAO’s Martial Bernoux presented the stark findings: Between 2005 and 2015, dairy related emissions have increased by 18 percent, while emissions intensity of dairy production has decreased by 11 percent. Emissions intensity (EI) measures the amount of emissions generated per kilo of milk produced. Had the EI reductions not taken place, says Moore, the dairy sector emissions would have increased by 38 percent. The FAO used its GLEAM methodology to make the calculations. Bernoux suggested that there is much more potential to reduce emissions intensity in developing countries, where farmers have two to three cows on average and produce far less milk than their counterparts in industrialized countries. In short, let’s focus on developing country farmers in Kenya or Uganda, rather than mega-dairies in California that churn out vast quantities of milk, methane and nitrous oxide. The argument goes: If the Kenyan farmer can reduce her five cows to two and still produce 50 liters, we would have saved emissions.

What this conveniently ignores, however, is the total increase in emissions from the ever-growing numbers of dairy cows in the U.S., New Zealand and Europe. In fact, IATP and GRAIN’s Emissions Impossible uses the same GLEAM methodology in quantifying the dairy industry’s emissions. Fonterra and the Dairy Farmers of America, combined with their meat producing counterparts (Cargill, Tyson Foods and JBS), produce more emissions than ExxonMobil, Shell or BP. 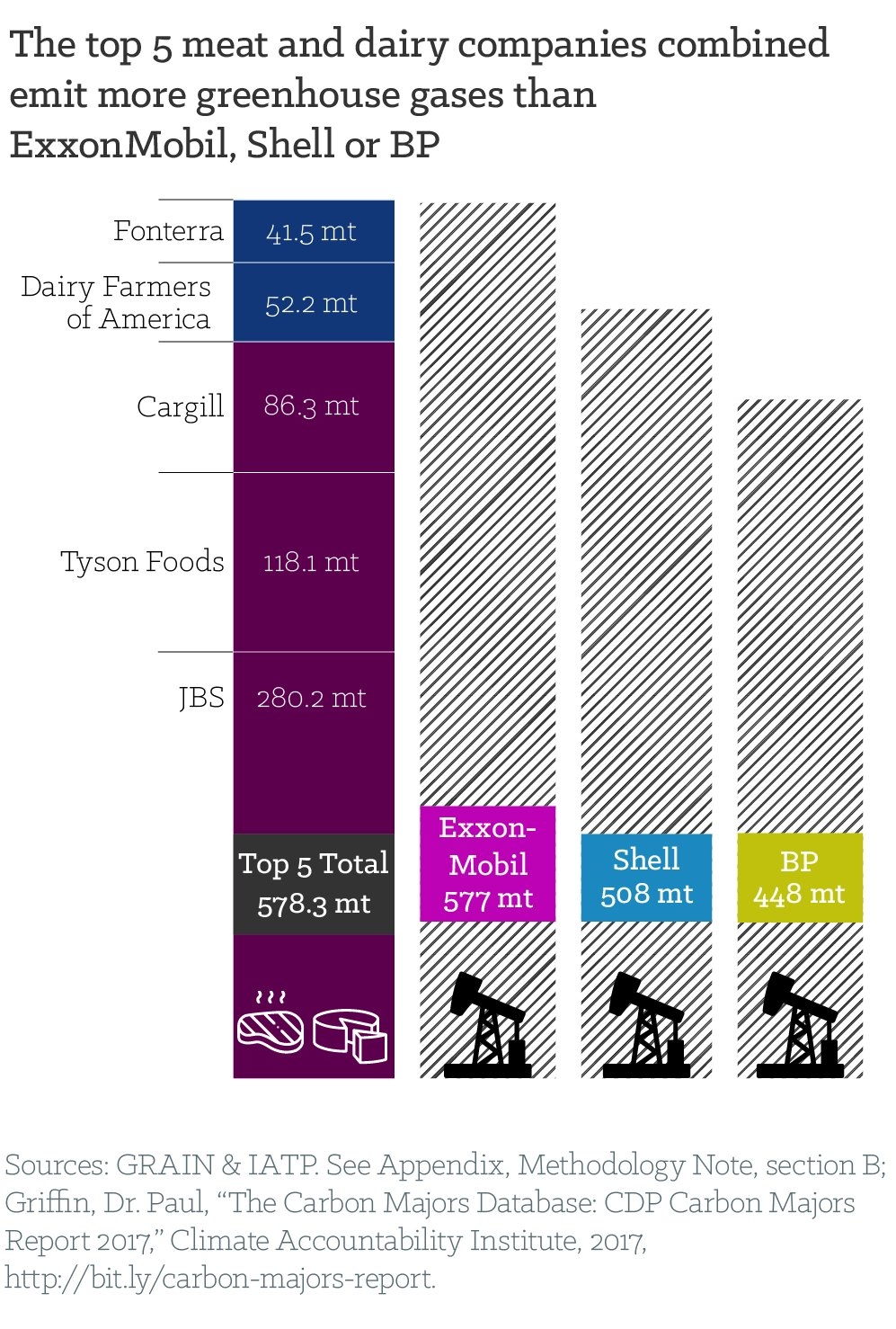 There has been a remarkable 30 percent increase in global milk production over the last 10 years, according to Bernoux, with production slower at 2.1 percent growth per annum between 2005-2010 and then 3.1 percent between 2010 and 2015. This production grew in all regions of the world.

When IATP asked if the dairy industry was considering diversifying into other non-dairy portfolios given the imperative to get on a 1.5°C pathway in the next 12 years, Moore’s response was quick and emphatic: The dairy sector is growing. There is a growing demand for dairy, and it is a critical nutritional and food security need. The transformative pathway Bernoux put forward on the dairy industry addressing its emissions? Focus on developing countries emissions intensity reduction and on soil carbon sequestration.  The mega dairy companies backing the GDP get a free pass from the FAO—but governments and the rest of us can’t afford to let one of the largest, and fastest-growing, sources of GHG emissions off the hook.