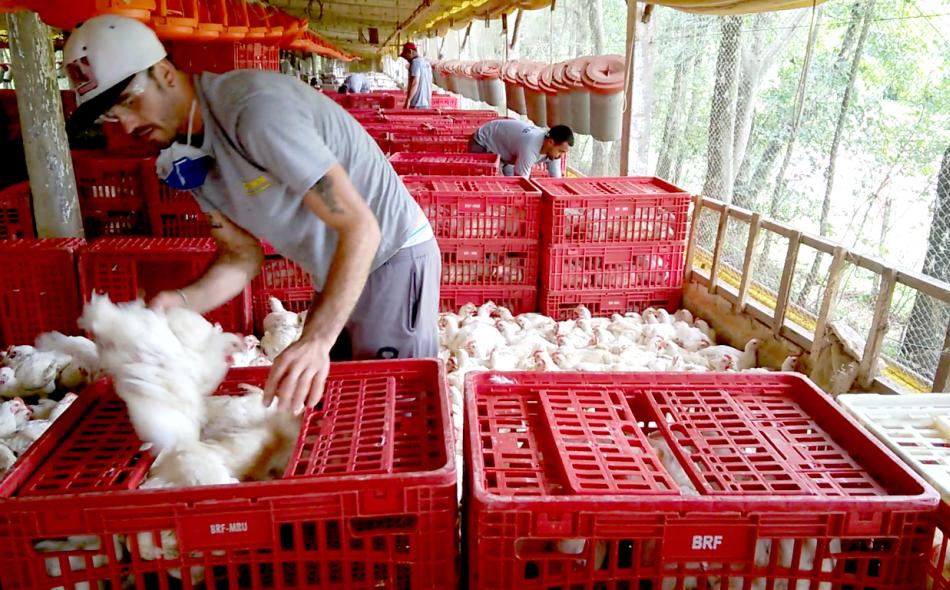 WEBINAR SERIES- The Rise of Big Meat: Corporate Crimes and Campaigns to Stop Them

IATP, the Heinrich Böll Foundation (HBF) and FASE released a report at the end of 2017 examining the social and environmental impacts of transnational corporations (TNCs) present in Brazil and their role in shaping the global meat complex. The report finds that:

This webinar series on the Rise of Big Meat in Brazil takes an in depth look at the report and explores the ascent of these TNCs and what this means for Brazilians and the rest of the planet.

Our first webinar highlighted slave labor in the Brazilian poultry supply chain as one key problem in The Rise of Big Meat in Brazil. This second webinar in our series focuses on civil society responses in different parts of the world to the human rights violations committed by meat companies such as JBS and BRF. From an international labor union perspective, to a U.S. coalition on poultry worker justice, to a Supply Cha!nge campaign in Germany, these actors will recount how interventions at various levels expose corporate crimes and push for social justice. What lessons can we learn and what more can be done? Join us for this webinar to find out.

James Ritchie, Assistant General Secretary, International Union of Food Workers (IUF-UITA-IUL)
James Ritchie has been with the IUF in Switzerland since 2012, most recently serving as the Assistant General Secretary and leading work around the meat, dairy and industrial catering sectors. Originally from New Zealand, James held various positions in the trade union movement in New Zealand over two decades before becoming the National Secretary of the New Zealand Dairy Workers Union in 2003.

The International Union of Food, Agricultural, Hotel, Restaurant, Catering, Tobacco and Allied Workers' Associations (IUF-UITA-IUL) is an international federation of trade unions representing workers employed in agriculture and plantations; the preparation and manufacture of food and beverages; hotels, restaurants and catering services; and all stages of tobacco processing. With a financial membership of 2.5 million, the IUF is composed of 430 affiliated trade unions in 130 countries representing over 10 million workers in IUF sectors. It is based in Geneva, Switzerland.

Alex Galimberti, Senior Advisor, Oxfam America
Alex Galimberti is a food professional turned activist. After ten years working in restaurants, he became an organizer and advocate for workers in the food system. In his current role as Senior Advocacy & Collaborations Advisor at Oxfam America Alex works building partnerships with workers and advocates to support better conditions for the people who produce, process, and prepare our food. The current campaign that he works on is called Lives on the Line and it uses innovative multi-stakeholder strategies to call on the poultry industry to improve working conditions for the 250,000 workers processing the chicken and turkey meat that we eat. Prior to joining Oxfam, Alex worked at the Restaurant Opportunities Centers United and also volunteered supporting different food workers and immigrant workers groups.

Oxfam is a global organization working to end the injustice of poverty. They help people build better futures for themselves, hold the powerful accountable, and save lives in disasters. Their mission is to tackle the root causes of poverty and create lasting solutions.

Sandra Dusch, Lead of the SUPPLY CHA!NGE campaign, Christliche Initiative Romero (CIR)
Sandra Dusch Silva has worked for the Christliche Initiative Romero (CIR) in different areas since 2003. Currently, Sandra coordinates the international Supply Cha!nge project. She has authored a number of reports and campaign materials about labor right and certification issues in global fashion and food supply chain. Sandra works closely with union networks to improve working conditions and bring about real change for workers on the ground. She graduated from the University of Berlin in Political Science.

Solidarity with the people in the countries of the South shapes the work of the Christian Initiative Romero (CIR). The organisation is engaged to improve their lives. Since 1981 the Christian Initiative Romero (CIR) stands up for Human and Labour Rights in the countries of Central America. The main focus is on the support of grassroots movements and organisations in Nicaragua, El Salvador and Guatemala as well as the campaign work and education in Germany. The objective is to build bridges between development countries and Germany through actions of solidarity. In terms of its patron, the Salvadorian Archbishop Oscar Arnulfo Romero who was assassinated in 1980, the Christian Initiative Romero stands up against conditions of injustice and takes sides with the poor. See www.ci-romero.de/cir0

Shefali Sharma, Director of IATP Europe
From the global production of feed grains to meat processing and retail, Shefali's current work and publications focus on the economic, social and environmental impacts of the global meat industry. She continues to examine how international trade rules and global governance on food security and climate intersect with the sector.