Fast Track a Bad Deal for Farmers and Our Food System, 110+ groups say 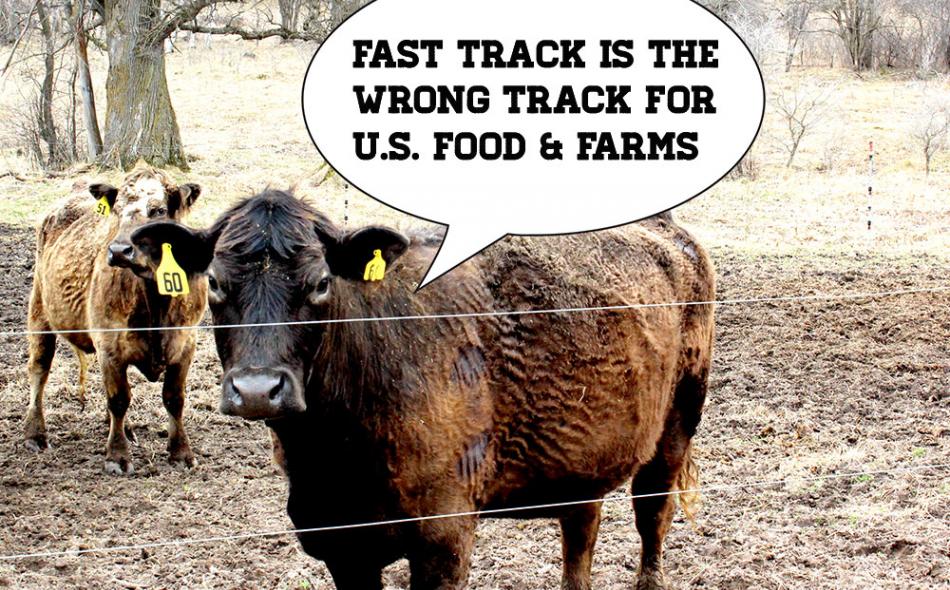 WASHINGTON, D.C.– Over 110 farm, food and consumer groups urged members of Congress in a letter today to oppose trade promotion authority or “fast track” legislation that would pave the way for trade agreements detrimental to farmers, ranchers and food systems, such as the Trans-Pacific Partnership (TPP).

A fast track bill, expected to be introduced this week, would allow the President to negotiate two mega trade deals in secret, and present a final version to Congress for a simple up or down vote—depriving Congress of its right to amend the finalized agreement. The groups expressed concern that pending trade deals would primarily benefit agribusiness corporations and not address the key challenges facing farmers and rural communities.

Gary Bloss, a Pennsylvania farmer and Steering Committee member for the Northeast Sustainable Agriculture Working Group said “Farmers and rural communities in the Northeast stand to lose if we don’t have a say in how the TPP is negotiated. These farming economies are experiencing a revival, in part due to programs and policies that support local and regional food systems. We shouldn’t threaten this with bad international trade agreements.”

Proponents of fast track assert that future trade agreements will increase agricultural exports and jobs, but the letter calls such projections simplistic and inaccurate. The groups wrote, “Many of the same promises of expanding trade benefitting U.S. farmers and rural communities were made during the debates for NAFTA, CAFTA, and the U.S.-Korea Free Trade Agreements have failed to materialize. Instead, rural communities have been roiled by profound economic instability.”

Bill Bullard, CEO of Ranchers-Cattlemen Action Legal Fund, United Stockgrowers of America, said “We oppose Fast Track and the TPP because the record shows that import standards for livestock safety and food safety were systematically lowered under previous Fast Track legislation and free trade agreements. This explains the unprecedented decline in the size of our U.S. cattle herd and the alarming decline of over 178,000 U.S. cattle operations just since NAFTA. Fast Track and the TPP will further threaten our food safety, our livestock herd health, and our food security because they will weaken our domestic production capacity by continually ignoring the supply-sensitive nature of our industry.”

The groups wrote that trade deals do not address the “problems confronting American farmers and rural communities” like falling crop prices, rising costs of inputs, and increases in corporate concentration. The groups also expressed concern that fast track opens the door to allow trade provisions that will undermine efforts to create local food systems that are fair for farmers, ranchers and consumers. New trade agreements could target Country of Origin Labeling (COOL) and GMO labeling efforts, while empowering foreign corporations to challenge local U.S. laws on land use, the applications of toxic pesticides and bans on fracking, among other policies.

“Rural communities across America are in dire shape,” said Terry Spence, a cattle rancher from Missouri and consultant for the Socially Responsible Agricultural Project. “Instead of focusing on re-building main streets to support hard working Americans, Congress is actively attempting to craft backroom trade deals with Fast Track which will turn rural America into the World’s factory farm.”

Karen Hansen-Kuhn, International Strategies Director of the Institute for Agriculture and Trade Policy said, “There are so many innovative, important programs across the country to rebuild our food and farm systems. The trade proposals would undercut those fragile gains, making them submit to what is most trade-friendly rather than what works best for farmers, consumers and the environment. Fast track and TPP would only increase corporate control over our food system.”

The groups strongly criticized the secrecy of the trade negotiations, and called for a “fair, transparent and inclusive process” that gives Congress a larger role in setting selecting countries to negotiate with, and setting negotiating objectives to ensure trade deals provide broad benefits.

Dena Hoff, board vice president for the National Family Farm Coalition, said, “There is too much riding on these trade agreements for the people impacted to have no say in their future. Legislators in all participating countries need input from citizens, but that can’t happen without transparency and with the influence of 600 mostly corporate advisors. Why would uninformed lawmakers wash their hands of their responsibility to read, debate and amend the terms of these agreements?”