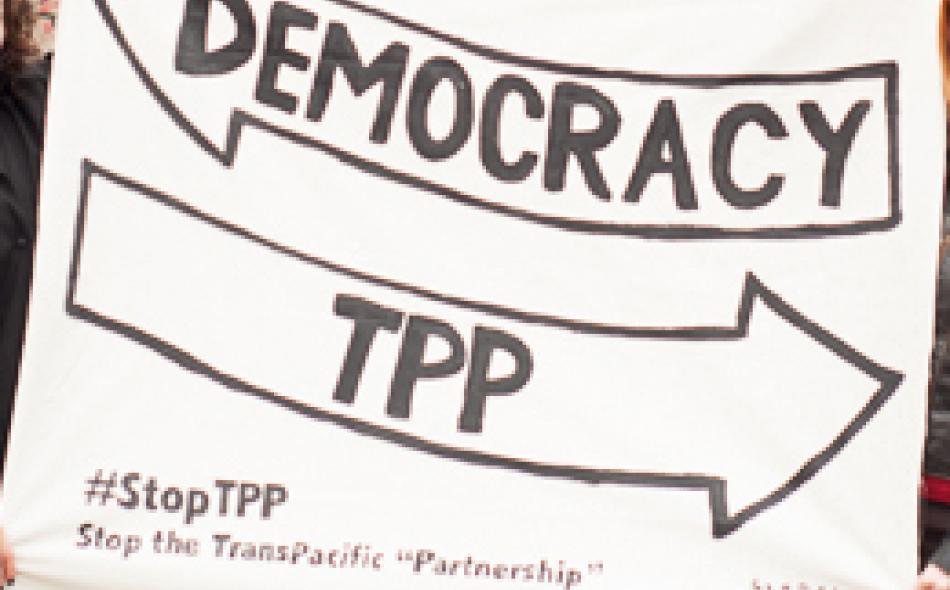 April 17, 2013 – There has been a quiet revolution going around the world, as communities and nations retake control of their food systems. In the U.S., more people are taking a look at processed foods at the supermarket and opting instead for healthier choices, grown locally with fewer pesticides. People in Cambodia have taken a hard look at what’s happening to their climate, soil and seeds, and figured out a new, low-cost way to produce rice, increasing production and putting farmers in charge. Brazilians are favoring local farmers growing sustainable foods for school lunch programs, lowering hunger rates dramatically as a result.

This trend is larger than individual choice: people are using their rights as citizens to make sure governments, from local to national, support these innovations. Unfortunately, U.S. trade policy seems wedded to a discredited notion of how we should get our food and who should benefit.

These local shifts involve choices, and in many cases choices that favor local producers over transnational corporations, local markets over imports; it seems that the U.S. Trade Representative (USTR) has a problem with that. In its latest report, the agency highlights what it calls the growing problems of “localization barriers to trade,” and vows renewed vigilance against these barriers to the free flow of goods and services. A free flow to where? And for whose benefit?

In the U.S., local food is sometimes dismissed as an elite niche market, but in the rest of the world it has another meaning entirely. For decades, Western aid and trade officials have told poor countries to rely on international markets to feed their people; governments were forced to cut support for “inefficient” things like local food production and emergency grain reserves; domestic farming was undermined as cheap imports flooded in. When the price of internationally traded food spiked in 2007-08, and again in 2011, the poorest couldn’t afford staples like wheat and rice, and global hunger soared. The developing countries that fared best were those that built domestic production and insulated themselves from volatile global markets. So while the USTR attack on all things local may be great for the U.S. food giants, it pushes an economic model that has been discredited by actual events.

Talks for a Trans-Pacific Partnership (TPP) that would unite markets of 11 countries have been going on for several years. Japan just announced it will enter the talks, despite the vigorous opposition of local farmers concerned about what such an agreement could mean for cherished local rice varieties and rural livelihoods. U.S. dairy farmers, already weakened by rising feed prices, worry that opening the U.S. market to imports from New Zealand will devastate local farms and cooperatives in favor of processed milk solids imports.

Now, President Obama has announced that he will launch new talks for a Transatlantic trade deal uniting the troubled economies of the EU and the United States. As we’ve seen before, instead of creating new opportunities for growth, this further “competition” will only serve to drive standards down to the lowest common denominator to the benefit of multinational corporations.

For years, the U.S. government has acted on behalf of agribusiness and large pharmaceutical companies to challenge EU bans on GMO foods and limits on the use of antibiotics and dubious drugs like ractopamine and bovine growth hormone in meat and dairy production. Those limits are the result of hard-fought battles by European farmers, scientists and consumers to slow the advance of questionable technologies and instead embrace the precautionary principle, which compels governments to make sure food additives are safe before putting them in our crops and on our plates. Instead, the U.S. government continues with recklessly lax regulation of such emerging technologies as nanomaterial coatings on fruits and vegetables, and synthetically engineered food flavorings.

Lowered standards like these could wipe out local efforts to rein in corporate power and rebuild food systems along more democratic lines, setting a poor precedent—and that’s the point. As Vice President Biden said of these trade deals earlier this month, “What we’re talking about is shaping a new standard that then becomes the metric by which all future trade agreements are measured.”

Let’s not start down that path. Instead of doubling down on bad ideas of the past, we must insist on a 21st-century trade system designed to improve food security and affirm democratic control of our food system.

Originally published by The Hill on April 16, 2013 and available on www.thehill.com.