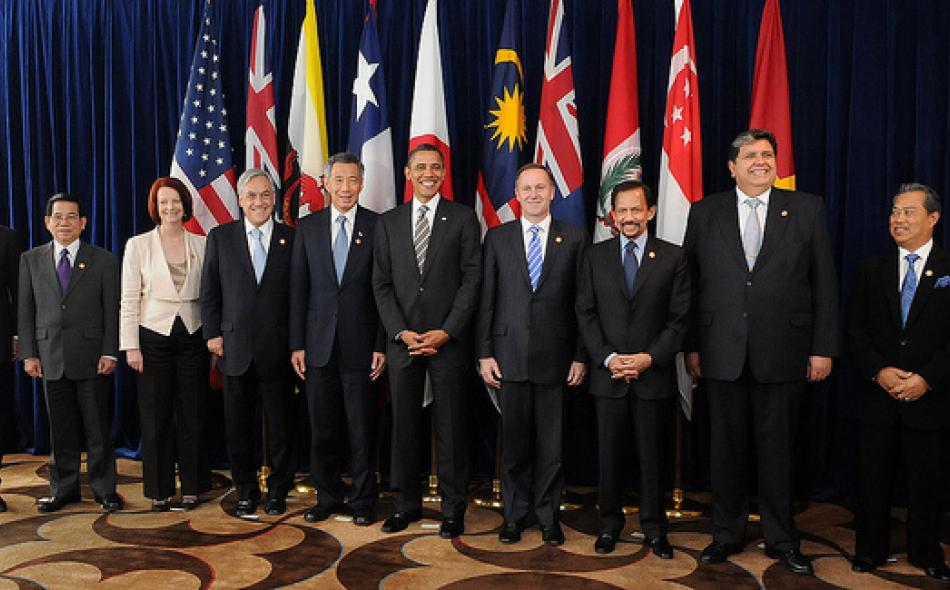 A 2010 summit with leaders of the member states of the Trans-Pacific Strategic Economic Partnership Agreement (TPP).

The 16th round of negotiations for the Trans-Pacific Partnership (TPP) began this week in Singapore. That trade deal has the potential to become the biggest regional free-trade agreement in history, both because of the size of the economies participating in the negotiations and because it holds open the possibility for other countries to quietly “dock in” to the existing agreement at some point in the future. What started as an agreement among Brunei Darussalam, Chile, New Zealand and Singapore in 2005 has expanded to include trade talks with Australia, Canada, Malaysia, Mexico, Peru, the United States and Vietnam. Japan and Thailand are considering entering into the negotiations, and others are waiting in the wings.

And yet, despite the potential of this agreement to shape (and in very real ways override) a vast range of public policies, there has been very little public debate on the TPP to date. Governments have refused to release negotiating texts. Media attention on agriculture and the TPP has focused on New Zealand’s insistence on access to U.S. dairy markets and Japan’s concerns over rice imports.

While important, that debate is much too narrow. The TPP is not only about lowering tariffs. It has the potential to greatly expand protections for investors over those for consumers and farmers, and severely restrict governments’ ability to use public policy to reshape food systems. The fundamental causes of recent protests across the globe over food prices, the rising market power of a handful of global food and agriculture corporations, as well as the dual specters of rising hunger and obesity around the world, point to the need to transform the world’s food systems, not to lock the current dysfunction situation in place.

In Who’s at the Table? Demanding Answers on Agriculture in the Trans-Pacific Partnership, IATP raises questions around investment, food safety (especially in emerging new food technologies), procurement and competition policy that should guide an informed public debate around the right rules for agricultural trade.

Trade policy should start from such goals as ending global hunger, enhancing rural and urban incomes and employment, and encouraging a transition to climate friendly agriculture—not from the bottom line of multinational corporations. The burden of proof should be on governments to demonstrate that the commitments being negotiated in the TPP will advance the human rights to food and development. Given the stakes for agriculture and food systems in all of the countries involved, they should include all stakeholders in a frank discussion of the trade rules that are needed to ensure that food sovereignty, rural livelihoods and sustainable development take precedence over misguided efforts to expand exports at any cost. That is what should be on the table in Singapore.

Read Who’s at the Table? Demanding Answers on Agriculture in the Trans-Pacific Partnership.