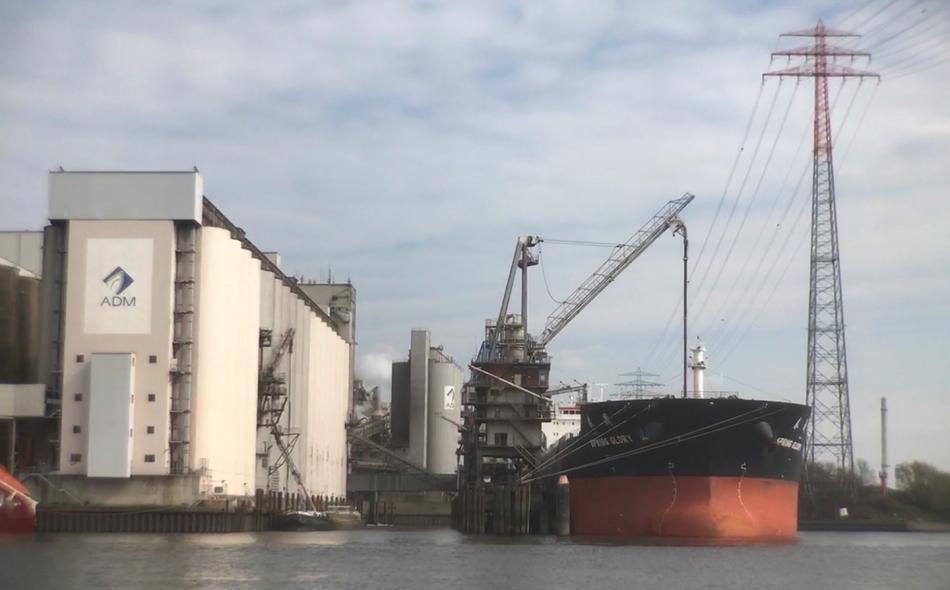 Nearly every aspect of agricultural production has become much more concentrated over the last few decades. This concentration has coincided with a reduced focus on antitrust enforcement, ever-increasing globalization locked in by international trade rules, and the explicit drive in farm policy to “get big or get out” under the notion that larger-scale agriculture could achieve economies of scale and better integrate with global markets. In reality, the policy of discarding smaller scale farmers and promoting industrial-scale agriculture has increased rural poverty, frayed the fabric of rural communities, and devastated local environments and waterways — while contributing to fewer choices for healthy foods for consumers. In “The Curse of Bigness, Antitrust in the New Gilded Age,” Tim Wu explains, “As a business gets larger, it begins to enjoy a different kind of advantage having less to do with efficiencies of operation, and more to do with its ability to wield economic and political power, by itself or in conjunction with others. In other words, a firm may not actually become more efficient as it gets larger but may become better at raising prices or keeping out competitors.”1 This is as true in agriculture as in other sectors.

The four-firm concentration (C4) ratio measures the degree to which the top four firms control a given industry. In testimony to Congress in 2001, USDA Chief Economist Keith Collins reported, “The four-firm concentration ratio for steer and heifer slaughter rose from 50% in 1985 to 82% in 2000 but has remained stable since the mid-1990s. The four largest hog slaughter firms accounted for 56% of total commercial hog slaughter in 2000, up from 40% in 1990 and 34% in 1980.”2 The overall trend of increasing consolidation in the meat industry has continued since 2000, evolving into what today is a highly concentrated global meat complex controlling inputs, production and processing of mass quantities of food animals.3 Reports of the USDA’s Economic Research Service and Grain Inspection, Packers and Stockyards Administration (GIPSA), which was shuttered by the Trump administration, tracked C4 ratios for livestock slaughter for many years. Compiling reports from 2013 and 2016 (the last year it was produced), we see the consolidation of this corporate power in many sectors:

The story is similar for other aspects of crop and animal production, as well as inputs. For example, by 2018 just four firms (DowDupont, Chemchina, Bayer and BASF) controlled over 60% of global proprietary seed sales, consolidated through mergers and acquisitions from the six major agrochemical/seed firms that existed in 2013.4 In 1975, the four largest corn seed firms controlled 59% of the market; by 2015, they controlled 85%.5 By 2015, two of those corporations — DowDupont and Bayer — controlled fully 78% of the corn seed market.6

American farming underwent a massive structural transformation in the ’80s and ’90s as the U.S. prepared for entry into the World Trade Organization (WTO) and the implementation of the Agreement on Agriculture that the U.S. helped craft.7 Subsequent global trade rules both under WTO and country-specific trade and investment agreements, including the North American Free Trade Agreement (NAFTA), have promoted and entrenched this corporatization of farming and the rise of these agro-chemical corporations as global actors without allegiance to a particular country and sourcing their supply chains from across the globe.

As a result of these changes, decisions and profits have become more concentrated in the hands of just a few corporations. Meanwhile farmers and farmworkers take on even more risks and debt, exacerbating the financial impacts of structural racism and entrenched discrimination against black and minority farmers within the USDA. In this industrialized model, much of the equipment, buildings and even feeder animals in factory-style operations don’t come from the local community but are supplied under contract by giant meat processors such as JBS and Tyson. Significantly, nearly all U.S. pork and poultry production is now conducted under this system, where the companies own the animals while the farmers take on the risk and cost of production. Unfair contracts are exemplified by the tournament system under which farmers are paid based on a nontransparent ranking system that compares each farmer’s performance against his neighbors’. The winners are rewarded while the losers are paid so little that many go out of business.8 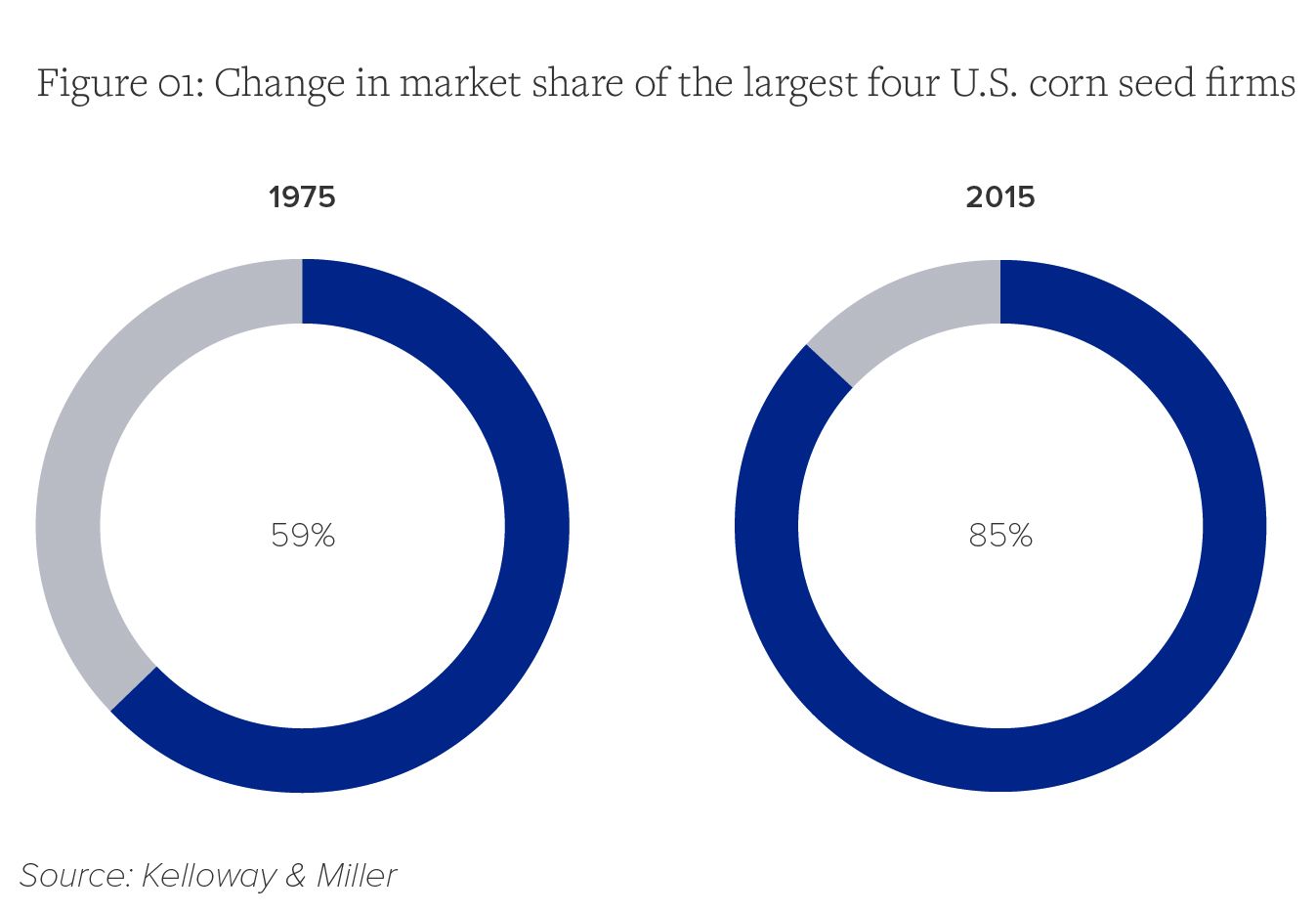 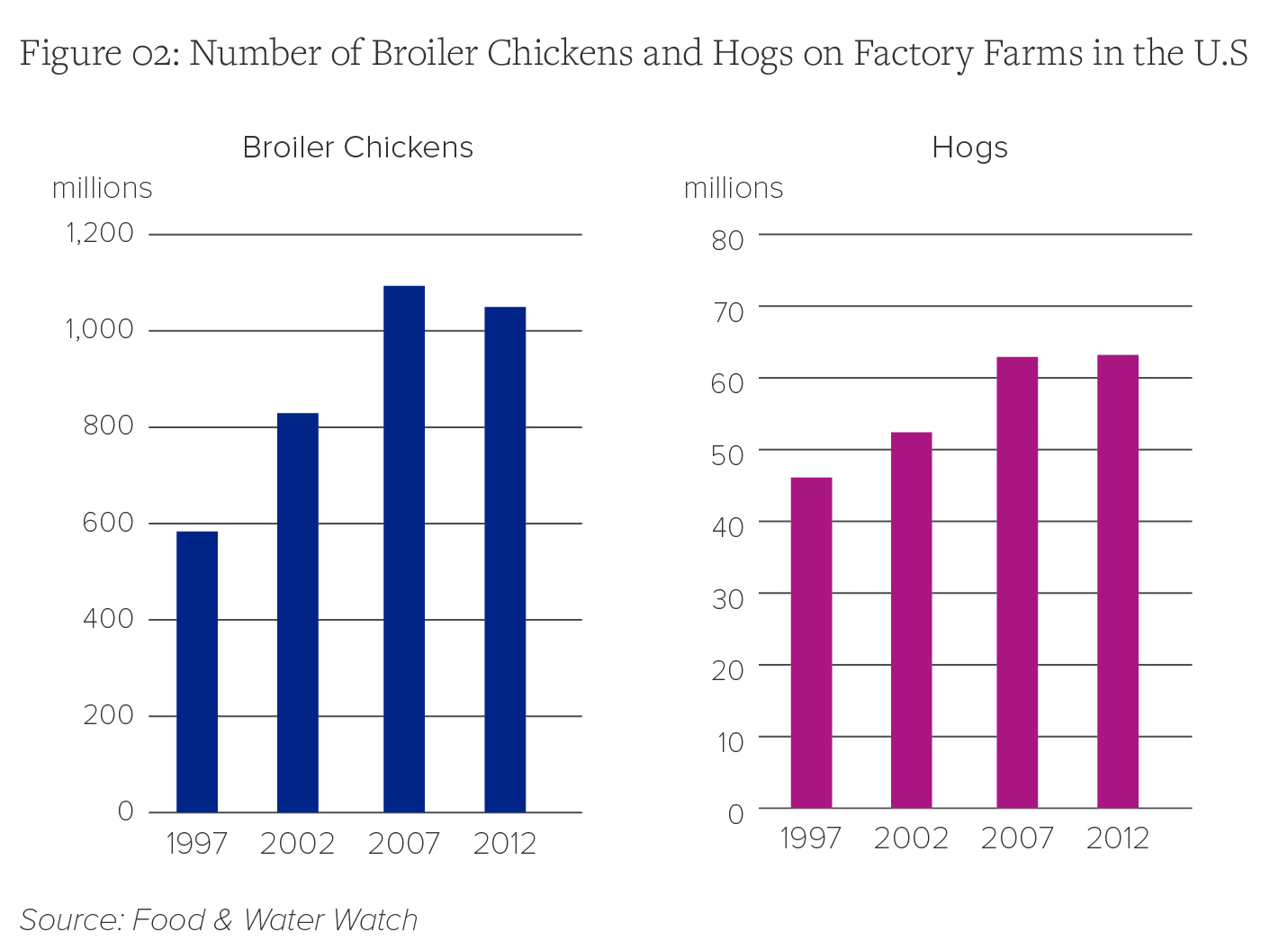 Large-scale industrial feedlots that fatten beef cattle prior to slaughter now dominate the U.S. industry. Feedlots used to be smaller, family-owned operations but are now increasingly owned and operated by meatpacking companies such as Cargill and JBS and can hold more than 18,000 head of cattle at a time.9 The same trends hold true for pork and poultry production. For example, in 1992 the average number of laying hens per site was 399,467; by 2012 the number jumped to 695,743.10

Even the purchase, use and repair of farm equipment is affected by corporate concentration. Two companies manufacture nearly half of essential farm machinery including tractors, and these companies have used copyright laws to forbid farmers from editing tractor software. As the Open Markets Institute reports, “In many cases, farmers can’t change engine settings, can’t retrofit old equipment with new features, and can’t modify their tractors to meet new environmental standards without going through the manufacturer.”11 Without public and regulatory pushback, this corporate capture is likely to accelerate as Big Data and agribusiness promote “smart agriculture” including drones, sensors, robots and other high-tech, proprietary systems as the new frontier in so-called “precision agriculture” techniques.12 Corporate control over data and other technological innovations further weakens farmers’ access to information on markets, production choices and the likely impacts of climate change, and has already contributed to a loss of biodiversity and decreased climate resilience.13 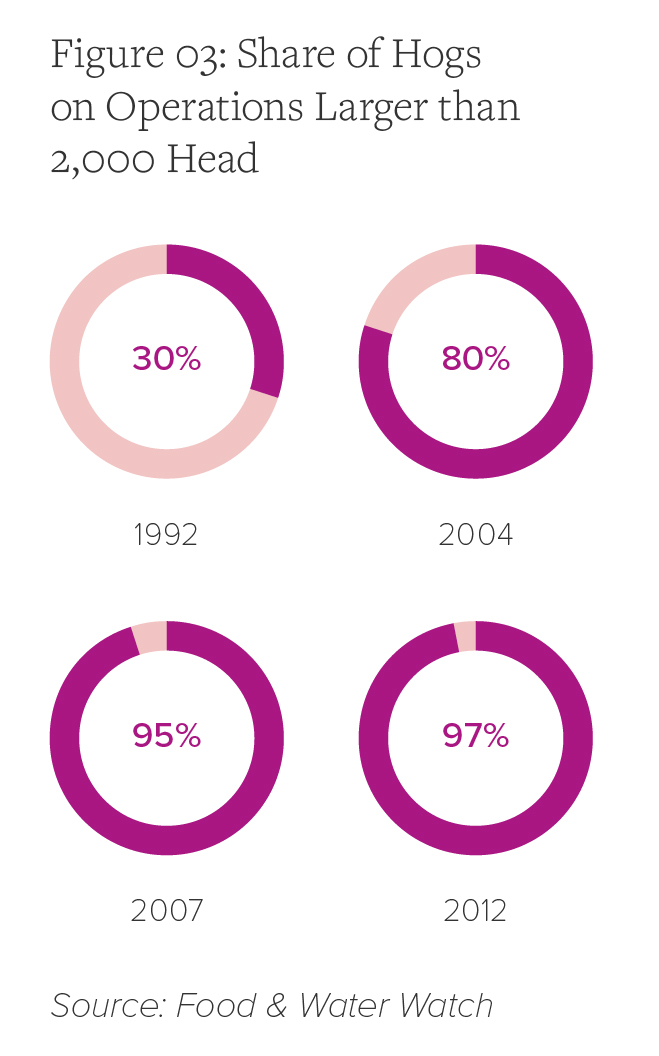 Despite these setbacks, tools are available to neutralize and push back on corporate concentration and control of agriculture. U.S. federal agencies have significant authority to address many of the destructive practices and anticompetitive conditions that have become normalized over the past decade. The Federal Trade Commission and the courts have previously tackled anticompetitive practices such as restrictions on consumers’ right to repair.14 Farmers pushing back against anti-competitive practices spurred the Department of Justice and USDA to conduct hearings in 2010, and USDA to propose rules under GIPSA mandating fairer contracts and other protections.15 While these rules were subsequently watered down and then dumped by the Trump administration, for the first time in decades, presidential candidates are focusing on excessive corporate power and specifically its pernicious impacts on farms, farmers and rural communities. Proposals to reform U.S. antitrust laws and address market concentration are being promoted by both mainstream conservative think-tanks and progressive policy organizations. The time is ripe for action and meaningful reform. 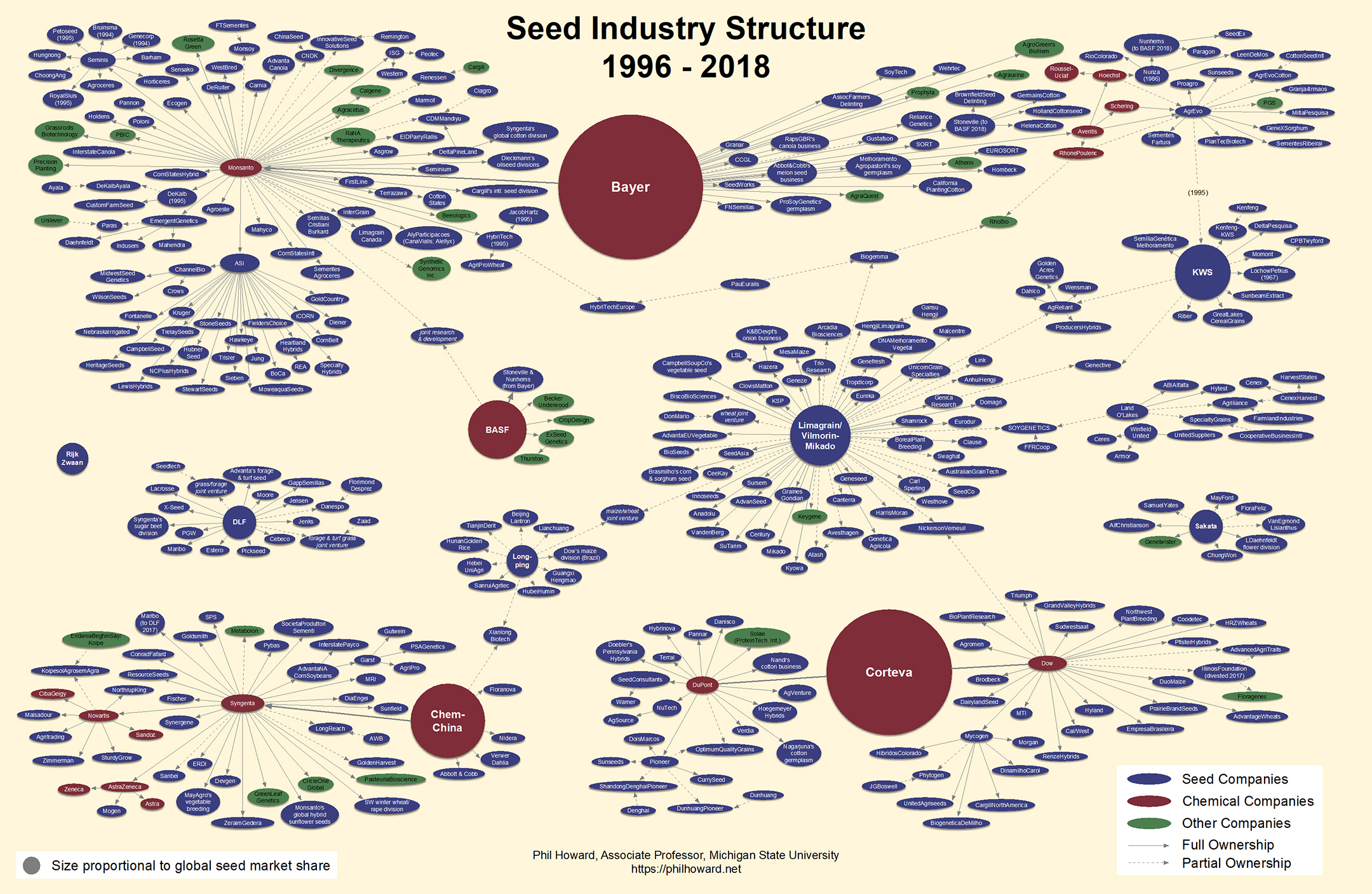