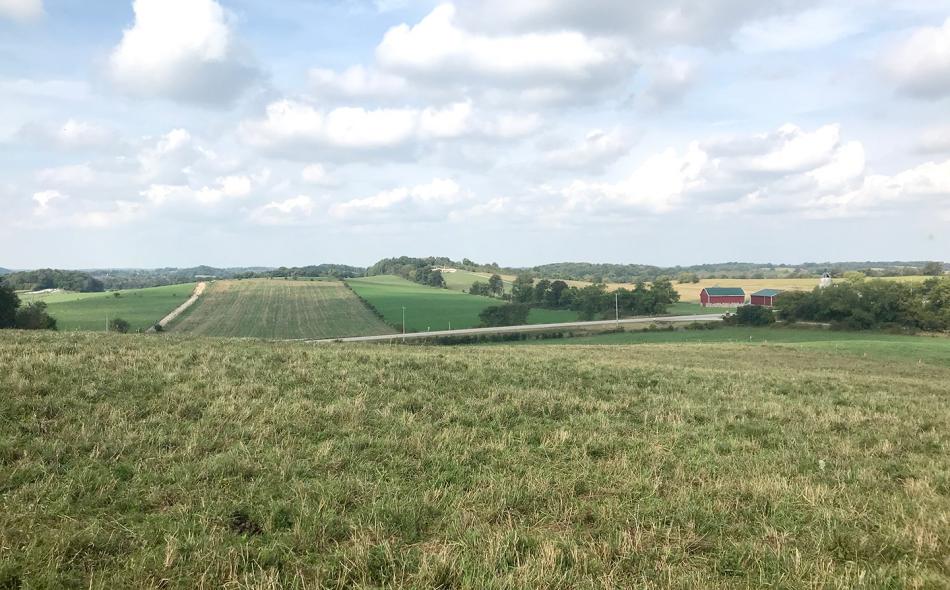 Land is the most critical resource for a farmer. It’s also challenging to access and afford, especially as farm debt is at a record high and farmers are facing the worst farm economy since the 1980s. Farmland value and ownership determine everything from production and conservation decisions, to succession planning, to whether young, beginning and socially disadvantaged farmers are able to start and maintain an operation. Today — similar to the last farm crisis — the costs for seeds, inputs and other capital are higher than what farmers are getting paid for their crops. This stark reality is jeopardizing farmers’ ability to hold on to their land, whether they own or rent. 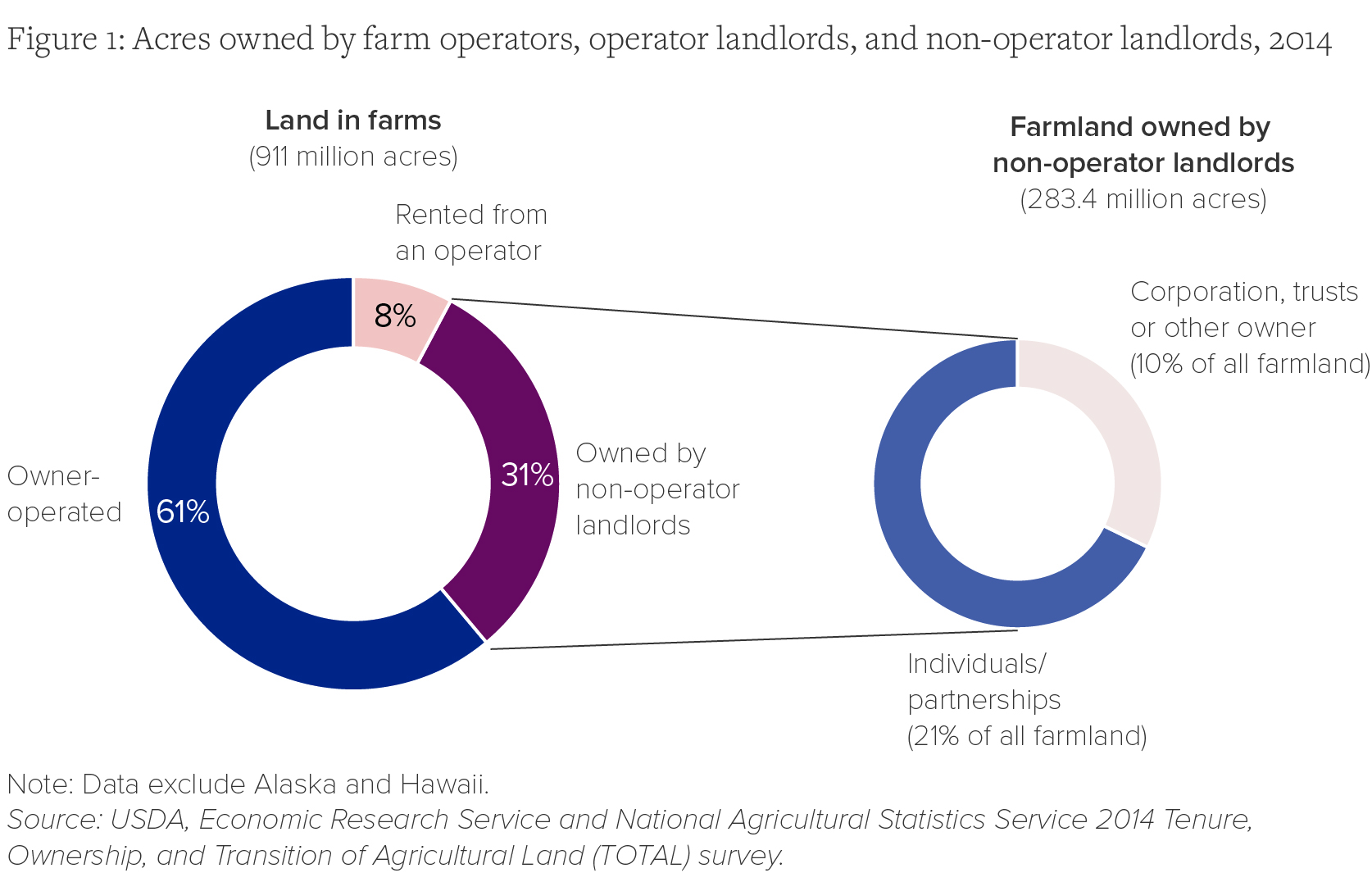 46% of the cropland and 72% of the pastureland in the U.S. is owner-operated.1 Small farms (as defined by the USDA Census of Agriculture) are the most likely type of farm to be owned by operators. Large farm operations are more commonly a mixture of rented and owned land.2 In today’s agriculture economy, where consolidation is encouraged by farm policy that prioritizes high yields and overproduction over everything else, renting land can be the only viable option.

Of the 39% of farmland in the U.S. that is rented, about one-third — roughly 10% of all U.S. farmland — is owned by corporations or trusts.3 The 1987 Census of Agriculture showed that at that time, only 5% of U.S. farmland was owned by corporations.4 That number has now doubled and the trend is continuing; between 2012 and 2017, the number of corporate and investor-owned farms rose by 9.4%. Investors are increasingly using agricultural land as an investment tool, including through Real Estate Investment Trusts, which allow investors to enjoy the profits of rising land values, but leave farmers to deal with the consequences of climate change and low commodity prices.

Farm bankruptcies and debt are on the rise, which could lead to a transfer of more land to corporations and investors. Farm bankruptcies rose 24% between September 2018 and September 2019, and were at decade-high levels in some parts of the country.5 Farm debt is at a record high of $415 billion and has grown by nearly 40% since 2012, while asset values have climbed only 17%.6 Meanwhile, the Trump administration’s trade war has driven down commodity prices, climate change has caused nationwide crop and livestock losses, and bottomed-out interest rates can only go up. This perfect storm has put many farmers in crisis — for dairy alone, the number of farms declined by 20% between 2012 and 2017.7 This precarious situation could drastically change who owns the land and how it is used.

Farmland value has been steadily rising since the last farm crisis to a 2018 average of $3,140 per acre.8 This has allowed landowners to borrow more money against their real estate to cover low prices, putting them further in debt as they hope for a good year. Renters are struggling to cover higher cash rents, and in many cases are also borrowing more money to do so.

Land values and cash rents have leveled off since 2014 and are just beginning to fall in some areas. Several states, including major agricultural states Minnesota and Iowa, saw a decrease in farmland values from 2018 to 2019.9 In Minnesota, cash rents have fallen nearly 12% since 2014.10 These declines coincide with the downturn in crop and livestock prices and reduced farm income. Paired with rising debt burdens, these conditions mirror those just before the 1980s farm crisis, where farmers’ debt burdens increased as land values plummeted, causing a mass liquidation of farms. 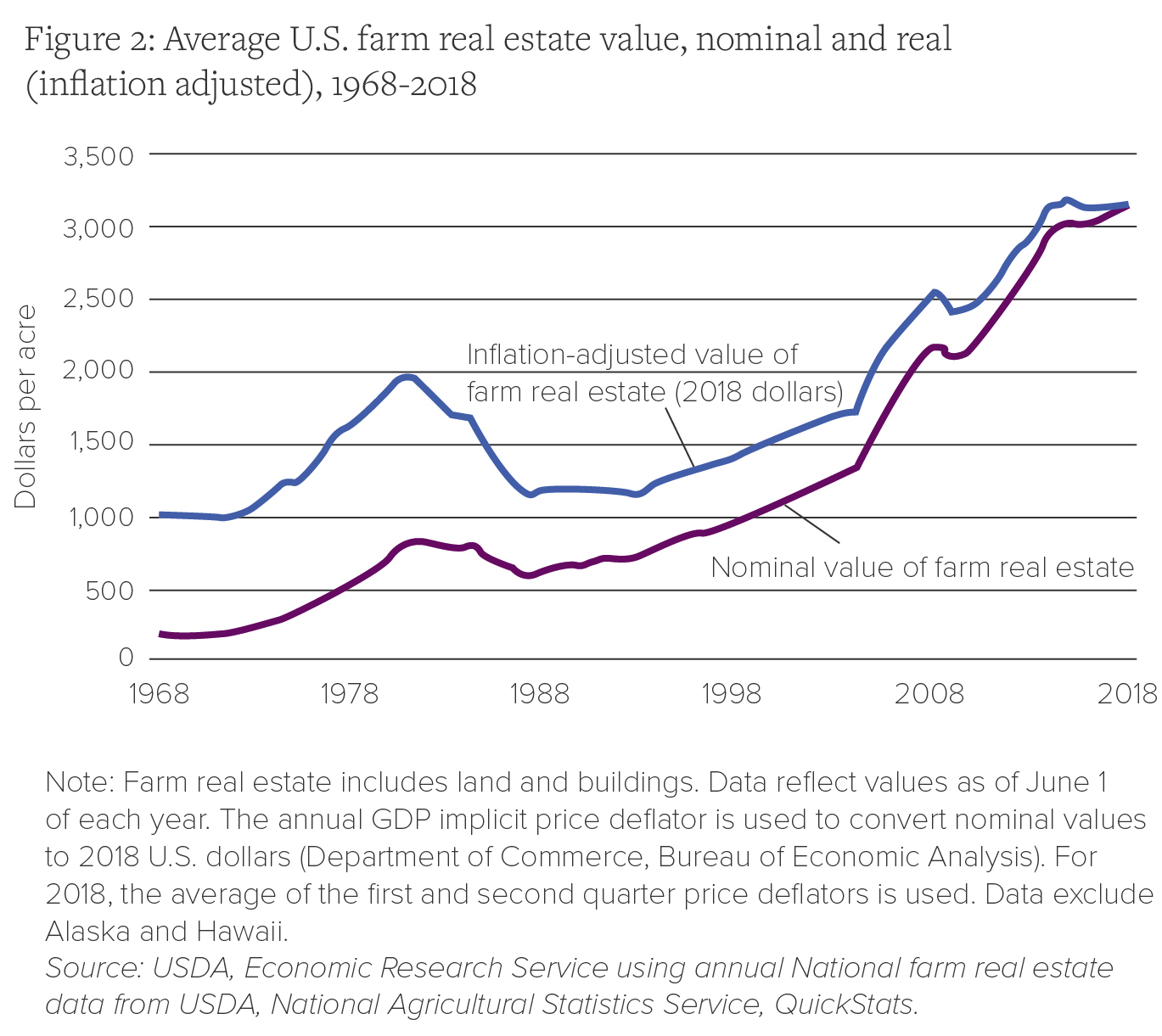 The demographics of farmers and landowners have shifted. Landlords are on average 66.5 years old and the average farm operator is 58.3 years old.11 This has increased since 1987 when the average farmer was 52 years old. The aging population of farmers and landlords will result in the transfer of significant amounts of farmland in the near future. Most land is expected to be passed on to the next generation, even if they never farm it. Still, the majority of farm owners do not have an exit plan.

In response to these barriers, USDA has increased its support to beginning farmers through programs like the Beginning Farmer and Rancher Development Program (BFRDP). The federal money invested in BFRDP supports the development, education and mentoring of beginning farmers. This program is a necessary investment but does not counter the systemic challenges that farmers are facing, especially those just starting.

One of the starkest demographic shifts in land ownership has been among black farmers. Since 1900, black farmers have lost 90% of their land. In 2012, 1.4% of the nation’s farmers were black in comparison to the turn of the 20th century, when there were more black farmers than white farmers.13 This decline happened for a number of reasons, including black farmers fleeing the Jim Crow South to the North during the Great Migration, discriminatory lending practices, heirs’ property laws and systemic racism that stacked the deck against black farmers in countless other ways.

Heirs’ property has been a major factor in black land loss. Black landowners frequently lacked a will transferring ownership of their property when they died, oftentimes due to distrust, lack of access or lack of knowledge of the legal system. This caused the land to be split among all known descendants, or heirs. Over time, properties became further split until there were sometimes hundreds of heirs. This made it nearly impossible to use the property as collateral, to subdivide it or to develop it. It also led to many partition sales, where all the land was forcibly sold in an auction when owners couldn’t agree on how to split it.

The 2018 Farm Bill began to address heirs’ property issues by allowing landowners without a clear title to obtain a farm number, which provides access to many USDA programs including lending and disaster relief. This is a long-overdue step in the right direction but does not make up for decades of removing black farmers from their land.

The original Crisis by Design summarized what was happening in the 1980s and is still happening today:

Low farm prices always force farmers to increase their production. Like any worker whose wages are cut in half, farmers faced with falling prices must work twice as hard and sell twice as much just to cover their bills. This has led to an abandonment of careful soil and water conservation practices and to the tilling of marginal, highly erodible land.

Conservation practices are increasingly necessary as the impacts of climate change impacts worsen. Cover cropping, integrating crops and livestock, no-till, diversifying crop rotations and taking land out of production can boost soil health, sequester carbon and make farms more resilient to extreme weather events. Yet, adoption of conservation practices is low. There tend to be fewer conservation practices on rented land.14 This is partially because much rented land is operated by very large farms who are expanding their operations for intensive production to make up for low prices.

The farm bill must fundamentally restructure its programs to be more inclusive of small and mid-sized operations and dramatically increase funding, outreach, and technical assistance for conservation programs. In addition, data show that young and beginning farmers are more likely to implement best management practices for soil, water, nutrient, and pest management. Investment in young and beginning farmer programs double as investments in the conservation of our land.