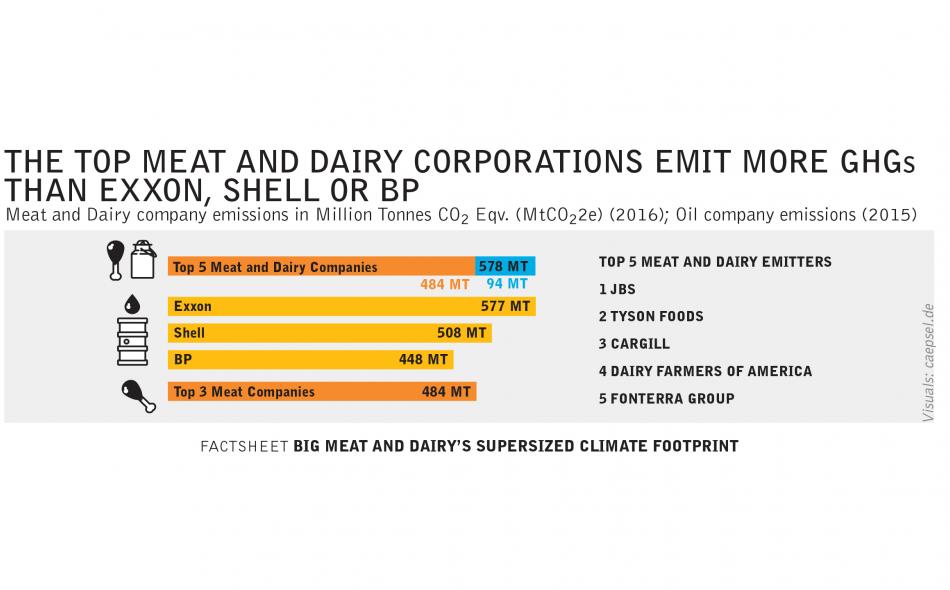 The top five mega-corporations responsible for factory-farmed meat and dairy are responsible for emitting more combined greenhouse gases (GHGs) than Exxon, or Shell, or BP. That is according to findings just released in a joint study undertaken by IATP and GRAIN.

We’re not talking about free range beef ranchers, or sustainable poultry farmers, or small and mid-size family dairy farmers, who already do a large part of what they can to minimize GHG emissions. And we’re not talking about pastoralists and livestock holders across the world, whose production of protein nourishes the producers themselves and the communities surrounding them.

It’s the corporations who own, run and profit from factory farms and confined animal feed operations (CAFOs) that are the culprits, as we outline in our op-ed in the Guardian on November 7. These are landlords of a system so powerful that it is, in large part, determining land-use patterns worldwide, driving protein production and consumption globally and changing cultural dietary norms, all in the name of expanding markets and profits. We’re talking about some of the biggest and richest corporations in the world who actually have it in their power to be among the most important industries in the world when it comes to solving climate change. We’re talking JBS, Tyson, Cargill, Dairy Farmers of America (the corporation, not the family farmers), and Fonterra Group.

The methodologies and data for assessing the factory farmed meat and dairy-production lifecycle GHG emissions are shown below. They are robust, and yielding remarkable findings. While changing your eating habits can make a difference, nobody is going to consume their way out of bad laws and policy. It’s time that big meat be held accountable. In the U.S., there is reason to push hard, and push now. The wheels of government are rolling over the speed bumps so cunningly built by those who had hoped to sideline climate science. Remember when the entire U.S. Department of Agriculture staff was informed by formal memo that they were banned from even using the term “climate change”?

Scientists, though, by their nature, tend to stick with science, which is why on November 3rd, the federal government's own Climate Science Special Report, published findings that not only use the words climate change, but reiterate the cause as human activity.

The tragedies of severe weather events unleashed by our warming climate are mounting and  personal. Are any of us without friends or family suffering from wind, fire, flood, or drought? And what of our crops, our animals, our soil, our water, our food?  Agriculture and food systems themselves live and die by climate. Let’s see to it that the biggest, brawniest, and most powerful corporations in the world take responsibility for the very same climate on which their own existence depends.