The Battle of Seattle

In 1999, the World Trade Organization convened its third ministerial in Seattle, Washington to set an agenda for the future. The meetings, planned from November 29 to December 4, marked the first WTO assembly in the United States since the organization's founding in 1995.

In response, nearly 50,000 people gathered in Seattle to protest globalization and the WTO. A diverse set of NGOs, union members, activists and individuals from around the world joined together to take part in events and protests demanding change at the WTO.

After months of strategizing and planning with other citizen groups, labor unions, church organizations, environmentalists, farmers and small businesses, IATP arrived in Seattle.

In the months leading up to the WTO ministerial, IATP coordinated with food and farm groups worldwide to maximize attendance in Seattle and conducted trainings to ensure as many people as possible would be on the same page regarding central message and key arguments of the protest. IATP also produced a newsletter, "The Road to Seattle," that highlighted events, meetings, forums and other planning activities during the lead up to the events. Explore some of our lead-in work and publications below.

The U.S. and the WTO Agreement on Agriculture

U.S. Agricultural Policy at the WTO: Pitfalls and Potential

IATP's Comments to the U.S. Trade Representative Regarding the Upcoming WTO Ministerial

The Coming WTO Round on Agricultural Trade: Perspectives and Trends

Food Security, Farmers and a Fair Place for the South

Trade Strategy of the U.S.: Analysis of the Current Agricultural Policy

The Continuing Threat from Trade Negotations

Testimony on the World Trade Organization Negotiations to the U.S. Agriculture Policy Forum

A Citizen's Guide to the World Trade Organization

WTO and Agriculture: The Next Round

The Road to Seattle

In Seattle, IATP hosted the International Media Center next door to the ministerial. The media center became a central meeting place throughout the event, with hundreds of journalists and media crews congregating to conduct interviews with participating groups. Working in collaboration with a public relations firm, we disseminated information on food and agriculture issues to the media both before and during the meeting.

After the evening curfew fell, leaders of civil society gathered in the center to discuss strategy and formulate coordinated responses to events taking place inside the official WTO meeting. To keep track of new developments, IATP held daily meetings for protest participants working on food and agriculture.

IATP also launched WTOWatch.org, a website with video of hundreds of events and protests that took place in Seattle.

Place Your Bets: Agricultural Biotechnology and the World Trade Organization 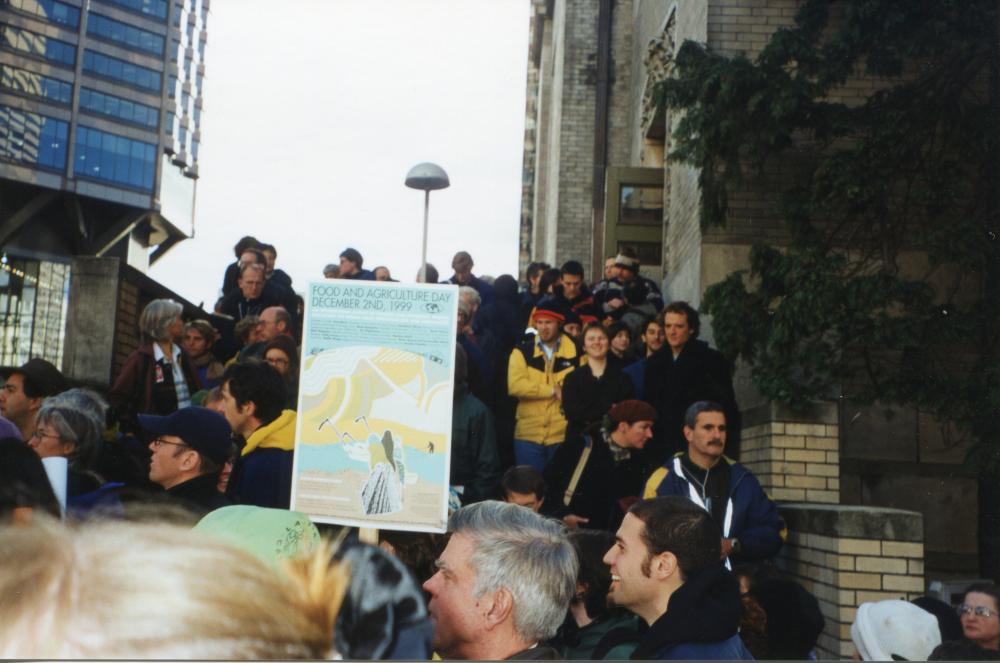 The combination of demonstrations on the outside and protest from developing nations inside the meetings brought the ministerial crashing to a halt. On the last day of the summit, the WTO announced that the talks had failed. The trade delegates from 134 countries had not arrived at a new global deal.

"In Seattle, civil society said to the world that global affairs are much too important to be left up to national government or global bureaucracies. We have announced that we are ready to engage in a dialogue with others concerned with global governance..."

After Seattle, IATP engaged in a continued dialogue, continuing to publish on WTO's agriculture policies.

A Vision for Agriculture at WTO

In the Aftermath of Seattle: WTO Negotiations Pertaining to Agriculture

Agriculture, Trade and Africa: Where to After Seattle

Down on the Farm with the WTO

Battle Royale of the 21st Century

Living Up to the "Never a Round Again" Promise