Chipocrisy: Will Chipotle add fair labor to its definition of sustainability? 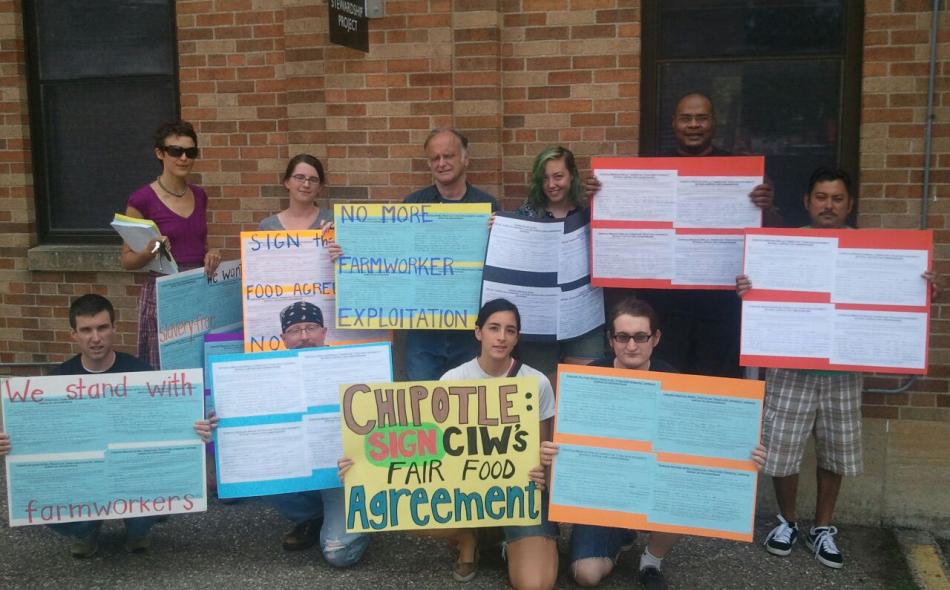 Steve Ells is doing a great thing. It’s not just the Chipotle founder and CEO’s decision to buy organic, or local, or avoid antibiotics in animal products. It’s not even his focus on ethically raised meat. No, his greatest contribution is one of omission. While nationwide protests urge Mr. Ells to sign a labor agreement with farm workers, the mainstream press (most recently Time magazine) has chosen to focus on the eco-friendly practices of the Chipotle fast food chain. They call this “sustainability,” but it’s not; and this is what Mr. Ells has given us—an opportunity to redefine sustainability.

Most people think of sustainability as environmentalism for the business owner, but this is a narrow redefinition of a broad, inclusive term. To sustain is to keep something going, to endure. A sustainable system is one in which the elements are used only to the point where they can regenerate, where resources are not simply used up and disposed of. In this more comprehensive and accurate sense, a food system that exploits workers is not sustainable.

On Wednesday, July 25, supporters of the Coalition of Immokalee Workers held protests at Chipotle locations around the country. Representatives from the Institute for Agriculture and Trade Policy (IATP), Centro de Trabajadores Unidos en Lucha (Center of Workers United in Struggle) and the Land Stewardship Project (LSP) convened at an Uptown Chipotle location to present the manager with 500 names gathered to date on a petition urging Steve Ells to partner with the CIW. The CIW represents 33,000 tomato pickers in Immokalee, Florida. For more than a decade they have earned international recognition for exposing slavery rings in Florida’s tomato fields, including the 2007 Anti-Slavery Award from Anti-Slavery International of London. National Resource Defense Council (NRDC) has also recognized the essential participation of food workers in the concept of food sustainability, with a “food justice” award presented to the CIW earlier this year.

McDonald’s (which formerly had a controlling stake in Chipotle), Taco Bell, Whole Foods, Trader Joe’s and other companies have signed onto the CIW’s Fair Food Agreement. The Coalition has partnered with some of the most successful food retailers in the world, and their endorsements are irreproachable. So why has Steve Ells been a holdout? If we take him at his word (and why not?), he does not object to the penny-per-pound increase in the workers’ wages, nor basic sanitation, breaks and freedom from abuse in the fields. What he objects to is being held accountable to these standards by the workers themselves. Chipotle previously agreed to grower-controlled monitoring by Socially Accountable Farm Employers (SAFE), which was discredited after SAFE-certified employees were found to be practicing slavery. The Fair Food Agreement guarantees the CIW‘s participation in monitoring and reporting abuse. Mr. Ells has said that this “does not actually change those conditions for farmworkers,” but so far it’s the only thing that has. As he wrote in response to a customer’s concerns, “We feel we do not need to sign a contract to do the right thing. We do the right thing because that is the kind of company we are.”

Chipotle’s soul may be spotless, but this is not the way we do business in the US; we require some level of oversight. Just as Americans rightfully demand that government monitor the safety of our food (and Steve Ells has been outspoken about antibiotic use in factory farms), we also insist on fair treatment and pay for (most) workers. In fact, worker oversight is more crucial on farms than elsewhere, because field workers are not protected by New Deal labor laws. The “agricultural exemption” is defended as a protection for family farmers, who would otherwise be held to unreasonable wage and overtime legislation. It was actually the result of Southern Congressmen in the 1930s refusing to support the bills unless fair wage restrictions and the right to organize were excluded for their constituents’ (predominantly black) farmworkers.

The exception stands today and is one reason why farm work is predominantly performed by desperate immigrants. Until federal laws are expanded to protect all workers, the workers are forced to protect themselves, and they can only do so with the voluntary cooperation of the multi-million dollar corporations that keep their employers in business. In most cases this has required shaming the buyer into recognizing that consumers care more about human rights than they do about slightly cheaper winter tomatoes. No one is accusing Steve Ells of causing or endorsing slavery or the abuse which has been standard practice in Florida, but his slogan, “food with integrity,” creates a higher ethical standard. Chipotle does not practice sustainability, and an increasing number of diverse groups are calling attention to their “Chipocrisy.” A sustainable food system must sustain the land, the consumers and the workers who bring them together.