From platforms to gateways: How do we address the failure of the International Climate Regime and our governments? 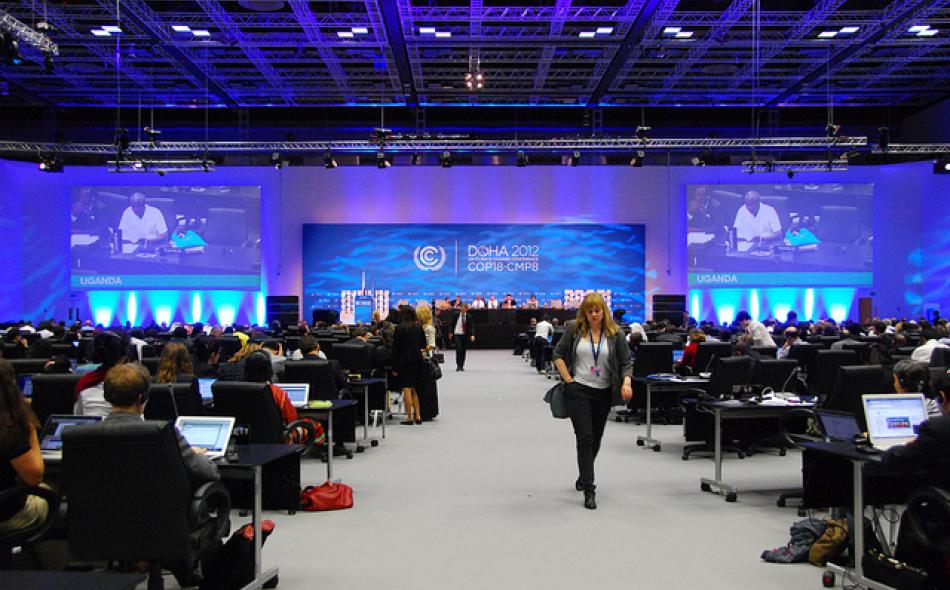 The 18th annual climate negotiations of the U.N. Framework Convention on Climate Change (UNFCCC) just ended Saturday night. These government officials had a historic and an urgently critical task at hand:  how to effectively address the increasing climate chaos characterized by extreme storms like Hurricane Sandy, Typhoon Bhopa (which recently just devastated several islands in the Philippines), droughts, floods and eerily erratic weather before it’s too late.

The “Doha Climate Gateway,” as the outcome is being called, resulted in  a second commitment period for the Kyoto Protocol (the KP) and built the “gateway” for a new climate treaty that is supposed to come into force by 2020. In three year’s time, governments will have to finalize this new treaty that will now be negotiated in a track they call the Ad-hoc Working Group on the Durban Platform for Enhanced Action (ADP).

Because the KP’s first commitment period was set to expire this month, the Protocol’s future was uncertain. The U.S. continued to express disdain for the KP, Canada, Japan and Russia pulled out of it and New Zealand’s rejected it. Despite all this, somehow, governments agreed to a second commitment period (minus Japan, Canada, Russia and New Zealand)—but a very weak, almost farcical one. Thirty-five industrialized countries making up about 15 percent of global emissions will be party to the second commitment period, with no enforced total aggregate target for reducing emissions and a “maybe” option for increasing their ambitions for further emissions reductions by 2015. The cruel irony is that all governments in this latest UNFCCC outcome took note “with grave concern the significant gap between the aggregate effect of Parties’ mitigation pledges in terms of global annual emissions of greenhouse gases by 2020 and aggregate emission pathways consistent with having a likely chance of holding the increase in global average temperature below 2 °C or 1.5 °C above pre-industrial levels.”

In other words: “yes, we governments know that we have a massive gap between what we have said we would do to prevent catastrophic climate change and what is actually needed to prevent it, but hey! Let’s take another three years to figure that out and another eight to bring something binding into force. What’s the rush? We only began this process in 1992.”

The farce becomes apparent when you read the technical fine print of how these governments will meet some of these commitments. According to Carbon Market Daily1 governments did little in Doha to curb the biggest failure of the carbon market:  the oversupply of carbon credits that are already at “rock-bottom” prices. However, governments continued to endorse emissions trading and the Clean Development Mechanism as ways to account for their emissions reductions in the second commitment period. These approaches are heavily criticized by many civil society organizations as not only ineffective in dealing with climate change (since emissions continue to rise), but also because the markets themselves are speculative and deeply flawed. In the last few years, the prices of the credits certified as legitimate by the UNFCCC have crashed from 22 euros to 50 cents.2  Countries like New Zealand, Japan, Canada and Russia will rightly be excluded from claiming “certified emissions reduction” credits from the UNFCCC given that they have not committed to the KP the second time around. Instead, Thomson Reuters reports, Japan will “develop a new market mechanism to help meet a voluntary 2020 emissions pledge” while New Zealand may reduce its own reduction ambitions given that both countries rely heavily on buying credits to compensate or “offset” their own domestic emissions.3

Carbon market proponents want to not only keep these flawed mechanisms in place in the new treaty and but also develop “new market mechanisms” in the interim that will allow for further loopholes for major polluters albeit at a much larger scale (i.e., sectoral trading—estimating emissions reductions across an entire manufacturing sector or landscape that includes agriculture and forestry). These proposals are highly controversial and raise serious questions about environmental integrity. And governments failed to reach agreement over them in Doha. Countries like the U.S., New Zealand and Japan want to put in a framework in place that allows for them to use these market mechanisms to account for their emissions reductions and pay for them without actually having to commit to any legally binding targets. But actual investors think it’s pointless to have yet newer market mechanisms when there are no ambitious binding emissions reductions targets in the first place.

In spite of these issues, the “new market mechanisms” now have a placeholder in the development of the new treaty because parties have directed the Subsidiary Body for Scientific and Technical Advice (SBSTA) to develop a work program that may or may not be agreed at the next Conference of Parties (COP 19). Elements of this work programme include “means to stimulate mitigation across broad segments of the economy, which are defined by the participating Parties and may be on a sectoral and/or project-specific basis”; hence, the option for sectoral trading, but also carbon accounting (monitoring, reporting and verification) of carbon sinks. These mechanisms can have voluntary participation, but somehow must lead to “standards that deliver real, permanent, additional, and verified mitigation outcomes, avoid double counting of effort and achieve a net decrease and/or avoidance of greenhouse gas emissions.”

What this essentially means is that the fight on environmental integrity and the prospects of the carbon market will continue into the next year and in the formation of the new agreement. The decision invites countries and observers to submit comments on how that might work by March 25, 2013.

The challenging questions about oversupply of credits and the environmental integrity associated with these offset credits, particularly in the clean development mechanism, have been postponed to a review that will take place next year on the CDM. Thomson Reuters reports that investment in the CDM has virtually stopped given that its value has plunged by 95% in the last four years, crushing hopes for investor profits.4

The big fight on the broader issues related to agriculture continued in the SBSTA—one of the four bodies of the UNFCCC charged with scientific and technical advice. The decision reached was the following:

After several interventions by Parties, the SBSTA Chair ruled that there was no consensus amongst Parties to refer this matter to the COP for further consideration…SBSTA would continue its consideration of this agenda item at its thirty-eighth session.

In other words, this will be another fight at the next UNFCCC meeting in April 2013. The fight, as reported in our last blog, is about agriculture emitters looking for ways to account for agriculture emissions through offsetting and trading credits, in particular through flawed approaches such soil carbon sequestration accounting. New proposals from the EU that include “full landscape accounting” would broaden this approach to include forestry and agriculture and create even more room for creative accounting. Developing countries have continued to insist that their agriculture priority is adaptation given climate change’s devastating impacts on food production and food security.

However, there is now a placeholder for this debate to continue under an agenda item in the ADP negotiating track for the new treaty. The ADP track has two workstreams: the first to discuss what the post-2020 agreement will look like; and the second relating to “pre-2020 ambition.” One of the Doha decisions for workstream 2 is to hold a series of workshops and roundtables based on submissions by March 1, 2013 from governments and observers to the UNFCCC on several issues including:

(a)  Mitigation and adaptation benefits, including resilience to the impacts of climate change;

(b) Barriers and ways to overcome them, and incentives for actions;

Though seemingly in code, this is a good placeholder for the fight on agriculture mitigation and adaptation—by whom, for whom. The World Bank, along with New Zealand, the United States and other industrial agriculture countries are eager proponents of soil carbon markets and the expansion of land use and land use change accounting to include agriculture. Both New Zealand and Australia are building their own national and sub-national markets that hope to expand coverage to agriculture. Developing countries, particularly African countries, are being “sold” the idea that they would make money off of this by developing their own credits. Carbon markets are dramatically proving otherwise for all credits let alone these types of risky credits. The World Bank hopes to broker these types of credits.

The discussions in SBSTA on the expansion of agriculture credits in LULUCF in the KP track will continue. See IATP’s blog, "What’s at stake for agriculture in COP 18" for more on these discussions.

The one big achievement of the talks was the agreement to address “loss and damage” from the impacts of climate change on developing countries and to develop a mechanism for it. But the U.S. remained adamant that any promises for “aid” for loss and damage need not be additional to what is already being provided under current donor schemes.

The stage is therefore set for more of the same in the coming years in the climate negotiations—a blueprint for a dramatic shift out of our global crisis was nowhere visible in the Doha outcome.

People versus the State of Climate Chaos

In the closing plenary of the Kyoto Protocol track, a representative from the government of Philippines made a moving plea:

Have we managed to give justice to what the world demands of us?…as we sit here, every single hour, even as we vacillate and procrastinate here, the death toll is rising. There is massive and widespread devastation. Hundreds of thousands of people have been rendered without homes. And the ordeal is far from over, as Typhoon Bopha has regained some strength as it approaches another populated area in the western part of the Philippines…And I am making an urgent appeal, not as a negotiator, not as a leader of my delegation, but as a Filipino. I appeal to the whole world, I appeal to leaders from all over the world, to open our eyes to the stark reality that we face. I appeal to ministers. The outcome of our work is not about what our political masters want. It is about what is demanded of us by 7 billion people.

In the lifetime of the climate treaty, rather than responding to the dire, evolving and new challenges that climate change is bringing to our civilization, government ministries charged with the responsibility have done nothing but cater to the corporations most likely to lose from the concerted and determined actions required to effectively deal with one of the most critical crises of our times. It seems unfathomable—given what has come out of Doha—that these governments will do anything differently next year or in three years unless every citizen (very soon) considers this, quite literally, the very matter of survival of our species on this planet.