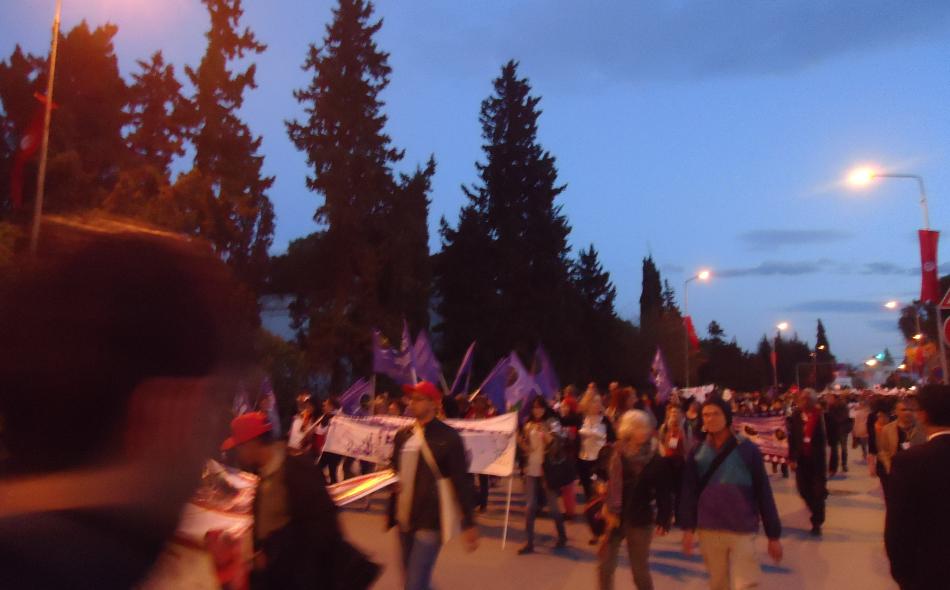 A shot of the opening march of the World Social Forum on March 26. About thirty thousand people marched down Tunis' principle avenue, lined with soldiers to prevent attacks from right wing Islamists.

The Bardo Museum in Tunis, Tunisia has the largest collection of ancient mosaics in the world. Most of the mosaics, depicting Roman, Greek Phoenician and Nubian life, gods and royalty, are incomplete. Some have had to be radically reconstructed, with the help of archeology and very skilled and imaginative art conservationists. The Bardo mosaics have something in common with the World Social Forum (WSF): it is impossible to see more than a handful of the WSF’s nearly one thousand events, but it is possible to reconstruct a sense of the whole from some of its pieces.

The slogan of this WSF is The Revolution for Dignity. For a U.S. audience, this may seem like a strange slogan, but the Revolution in Tunisia, which deposed a dictator, began in January 2011 when a vegetable vendor harassed by police for operating without a license burned himself to death, literally crying to be treated with dignity. In a country with an unemployment rate of 60 percent and a large part of its wealth parked in European banks, rather than invested to create jobs, to be treated with dignity does not seem to be asking very much.

Dignity is, in part, about valuing human health and safety. One of the daily indignities in Tunisian life is the search for a clean public toilet, including toilets at the El Manar campus of the University of Tunisia, the site of the WSF. In a panel on the crises of water and climate change, a Tunisian activist explained that university toilets were neglected because the university itself was neglected. Water to flush a toilet was two and a half times as expensive as bottled water. Further, in a country where potable water was in short supply because of extensive contamination of water by fertilizers and pesticides, plastic water bottles littered the streets because there is no recycling industry in Tunisia. A professor of chemistry at the University said that Tunisia desperately needed a recycling infrastructure, both to remedy a catastrophic degree of unemployment and to begin to repair Tunisia’s ravaged environment.

At IATP’s event “Regulating to protect the environment, public health and worker safety: Challenges of Nanotechnology,” Tunisian pesticide researcher and environmental activist Semia Gharbi gave a thorough review of damage caused by lack of protection for workers using pesticide, pesticide caused public health problems, and lack of regulation of pesticides due to the power of agribusiness exporters. A telling sign of the extent of industry influence is that the Arabic word for “medicine” and “pesticide” is the same (as it is in Hindi and many other languages). Pesticides, used to control household and garden pests, are sold on the same shelf on packaged foods.

Brazilian professor of law Wilson Engelmann discussed how nanotechnology presented an unprecedented challenge for Brazilian legislation, regulation and jurisprudence. Traditionally in Brazil, law is written after a factual basis for the law has been agreed. In the case of nanotechnologies, products are commercialized in the absence of law, but in the presence of large degree of uncertainty about the effects of nanomaterials on the environment, public health and worker safety. Professor Engelmann said that sustainable nanotechnology would require a high degree of cooperation among natural and social sciences, and a broad public debate to develop law that would enable it to be subject to public control rather than imposed on the public. He concluded that nanotechnology was so complex that it should become the subject of international law and regulation rather than starting from national legislation.

Dignity is also about valuing public discourse. Brazilian professor of sociology Tania Magna discussed her research on the marketing of products claiming to incorporate nanomaterials, including products for children and infants. One of the characteristics of Brazilian nanotech marketing is to present products “with nano” as the future in a country advertized by elites as “The Country of the Future.” Research into nanotechnology is difficult, however, because much of this new technology, though developed with public money, is not made available to the public but is only published in expensive journals, often foreign, that are too expensive for many Brazilian library subscription budgets. Furthermore, Brazilians scientists said they would conduct any regulation needed of nanotechnology, hence there was no need for them to talk with social scientists, much less with the public.

Retired professor of sociology Paulo Martins discussed his public engagement project in nanotechnology, which includes a near weekly webcasting of Nanotechnology Inside Out. With the help of young Tunisian technical and translation volunteers, both the IATP and Brazilian Research Network on Nanotechnology, Environment and Society panels were webcast to six universities in Brazil.

Dignity is also about the ability to chart one’s path. The struggle to get the Group of 20 governments to regulate their commodity and finance markets made a small appearance in my commodity market regulation presentation. A bigger review of the whole G-20 agenda was presented by Russia’s Boris Kagalitsky. He bravely noted that civil society movements, including those in Russia, were losing most of the battles to advance an economy in which everyone prospered. He said that the G-20s “development” agenda would reduce Russia to a commodity export dependent country with a huge capital flight resulting from the privatization of state resources. He invited WSF participants to engage in the G-20 struggle and said that St. Petersburg, the site of the next G-20 summit, is a beautiful city.

In the meantime, back in the U.S., I read of ongoing challenges to new commodity market regulations or even to prosecute high profile malefactors like HSBC because of fears that the jailing of an executive would cause a loss of market confidence. It reminded me of a display at the Bardo Museum in which the rulers of ancient Carthage walled themselves off from their subjects. The ongoing G-20 failure to change the banking culture of regulatory defiance and evasion to one of compliance is a grave danger not only to the global non-financial economy but to our individual dignity. Indeed, we urgently need a Revolution for Dignity.