Transatlantic dialogue between legislators on TTIP in the European Parliament 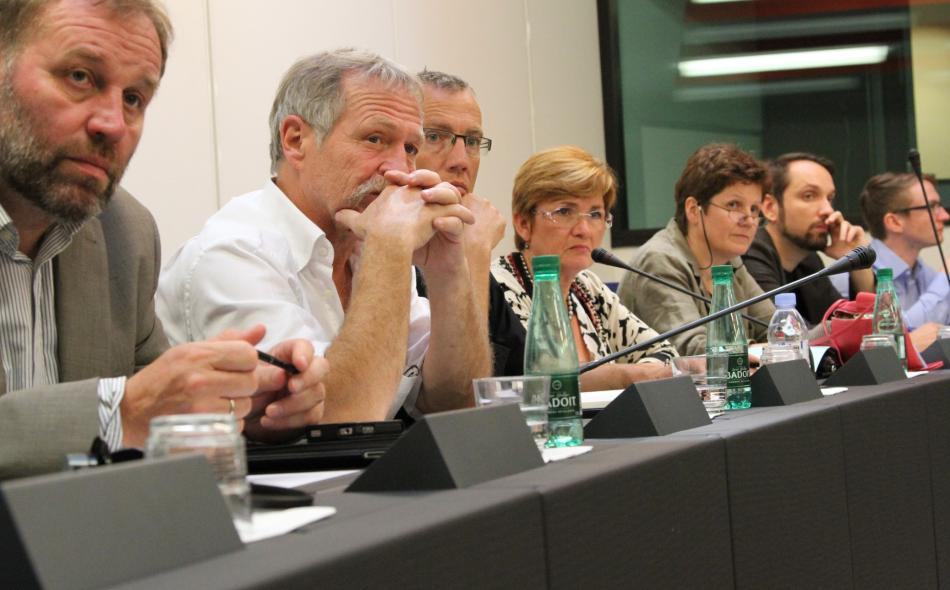 This post was written by ARC2020 and originally appeared July 21 at arc2020.eu. IATP will be cohosting a webinar on TTIP and Antimicrobial Resistance with ARC2020 on July 24, 2014. RSVP now.

An interesting window of opportunity for legislators dialogue between the USA and the European Union opened last week in Strasbourg, during the plenary session of the European Parliament, when Sharon Anglin Treat, from the House of Representatives of the US State of Maine, met Members of Parliament (MEPs) from various Committees and political groups in order to exchange views on the impact of on-going negotiations on a free trade agreement between the United States and Europe (TTIP) with regard to food, agriculture, environment and related issues.

Rep. Treat co-chairs the Citizen Trade Policy Commission, which advises the Maine Legislature and Governor on trade policy, and also is a member of the Intergovernmental Policy Advisory Committee (IGPAC) in the office of US Trade Representative Froman.

Representative Treat spoke about the very lively public debate among all stakeholders in her State of Maine and the growing awareness she has noticed about how TTIP could affect policies enacted or under consideration in Maine and other US states, particularly policies supporting small and organic farms, requiring GMO labelling, and regulating pesticides and chemicals in consumer products.  She discussed the interest of other state legislators across the US who share these concerns and have joined together to draft letters and pass resolutions on trade agreements including TTIP.

Some of the fields being negotiated in TTIP that Rep. Treat discussed included technical barriers to trade, so-called harmonizing rules or “regulatory coherence,” and procurement rules, all of which could have an impact on farming and food systems. She drew attention to concepts like “localization barriers to trade” which she qualified as a threat to the growing local food movements on both sides of the Atlantic trying to build closer ties between farmers and consumers and to offer fair income and reasonable food prices on both sides of the food chain.

MEPs from the majority groups of the EP, the conservative European Peoples Party and Socialists and Democrats, as well as Greens, Regionalists and the European Left showed interest in establishing closer ties between legislators from State and regional levels, so as to clarify for their constituencies which effects a free trade agreement would have in their rural and urban communities, their food systems and the quality of food. With the EU and the US trade representatives negotiating a number of trade agreements in parallel, such as the Transpacific trade partnership, MERCOSUR/EU, etc. legislators were keen to learn from experience with existing trade agreements like NAFTA. And they were keen to draw public attention to consequences of agreements on certain commercial standards such as “codex alimentarius” or the confrontation between the “precautionary principle” applied in the EU, and “sound science” being favoured by US corporations which would favour trade companies rather than improve quality of food production schemes.

Much concern was raised about transparency of the negotiation process and the influence Parliaments on all levels would have on the outcome. The fact that fast track in the US and the consent procedure in Europe would reduce legislators to a blunt yes or no to a final deal was strongly criticized.

MEPs present at the meeting expressed strong interest in establishing a more structured transatlantic dialogue which should include legislators and possibly involve experts and civil society so as to increase understanding and participation in the process. Rep. Treat noted that there are many areas of mutual concern among parliamentarians in the US and the EU, and offered help to involve legislators from various levels in the US in future transatlantic exchanges, and thanked MEPs and the initiating civil society networks of the meeting, IATP in the U.S. and ARC2020 in for their support.