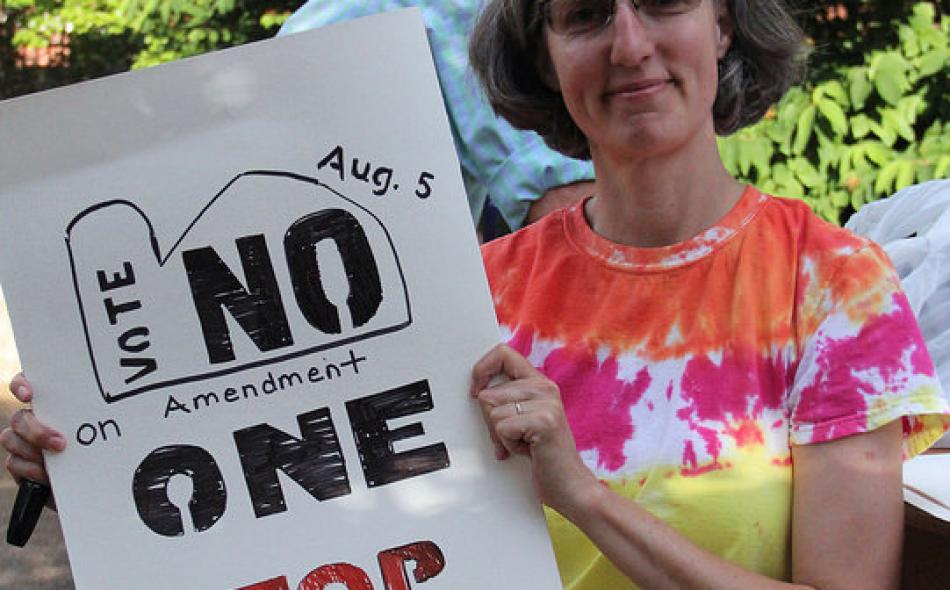 Today, Missouri goes to the polls to decide—among other things—if they want to amend the state’s constitution to include what is being referred to as the “right to farm.” This debate has been a fiercely pitched and costly battle to enshrine a right that many farmers rightly assume they already have.

The National Agricultural Law Center notes on their website that “All fifty states have enacted right-to-farm laws that seek to protect qualifying farmers and ranchers from nuisance lawsuits filed by individuals who move into a rural area where normal farming operations exist, and who later use nuisance actions to attempt to stop those ongoing operations.” In short, farmers and ranchers everywhere, including Missouri, are protected from those who complain about their daily operations on the basis of comfort.

So why such an adamant fight for something redundant? The simple truth is that the proposed Amendment 1—which would ensure the right of Missouri citizens to engage in agricultural production and ranching practices without infringement—has nothing to do with the protection of Missouri citizens at all. Despite the seemingly local origins of a measure to protect local farmers from “unreasonable regulations” and outside groups, the effort is nothing more than a national corporate wolf in a local sheep’s clothing. While the fate of Missouri will be known later today, it is important to understand the national context of fights like these.

Right-to-farm amendments, regardless of the state claiming them as their own, are the product of a national effort aimed at furthering corporate interests under the veneer of freedom and states’ rights. The mill that produces the stock right-to-farm legislation is the DC-based American Legislative Exchange Council (ALEC). From agriculture to education, ALEC offers generic “model legislation” aimed at the advancement of “limited government, free markets, and federalism at the state level through a nonpartisan public-private partnership of America’s state legislators, members of the private sector and the general public.” Simply, they create fodder legislation that favors big business and use private money to push it through as many state legislatures as possible via pseudo-grassroots initiatives.

Ironically invoking agrarian Thomas Jefferson in their agriculture principles, ALEC’s right to farm legislation trades the vigilance of democracy—which, despite its challenges, protects the rights of citizens above all else—for the indifference of corporations in the governance of the common good. The exhaustive list of the corporations that support and fund the formation and rollout of ALEC’s model legislation swiftly extinguishes any notion that any right-to=farm effort is for citizens.

To further understand the pervasiveness of ALEC’s national efforts to advance the interests of business over the citizens, one only has to move up the food chain. ALEC’s opposition to efforts to increase food worker wages is publically available and driven by the National Restaurant Association (NRA), a trade association and political front group for over 170 corporate restaurant chains that include the most dominant brands on the national food landscape. Backed by ALEC political influence, the NRA has been the predominant force working against state minimum wage increases and paid sick leave for workers over the past 20 years.

In the case of the right-to-farm push in Missouri, the amendment would essentially prevent the state legislature or local governments from responding to the needs of its citizens by passing laws or enacting regulations that might change the current agriculture or ranching status quo. Beyond the protection from nuisance complaints, this would also exempt agriculture and ranching operations from future legislative efforts to protect the environment and labor. The intentionally broad language of the measure effectively turns the determination of what is considered acceptable agriculture and ranching practices over to the courts, favoring the interests with the greatest capacity to litigate.

This state-by-state charade of corporate sheltering must be combated by authentic grassroots and public awareness efforts to maintain the right of a state to self-determine based on the yet unknown future. While ALEC quotes Thomas Jefferson’s 1787 letter to George Washington by saying “[a]griculture is our wisest pursuit, because it will in the end contribute most to real wealth, good morals, and happiness,” as mandate for its right-to-farm efforts, it must reconcile with his 1809 letter to Colonel Larkin Smith in which Jefferson warns of "the selfish spirit of commerce [that] knows no country, and feels no passion or principle but that of gain.”