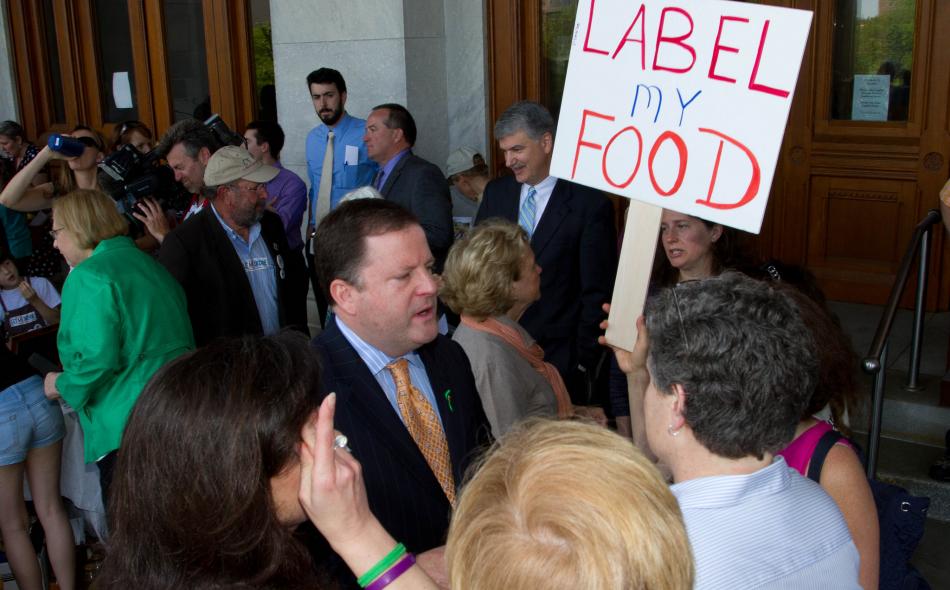 Protesters in Connecticut gather prior to the state's passing of its own GMO labeling laws.

Trade rules have always been one of the biggest hammers the biotech industry has had to push genetically modified crops on the world. Nearly a decade ago, the industry, through its surrogates at the U.S. Trade Representative (USTR), targeted the European Union’s precautionary approach to regulating GMO crops at the World Trade Organization and won. Later, Wikileaks revealed numerous cables from U.S. embassies in Europe calling for plans to retaliate against countries that didn’t support GMO crops.

While working on behalf of the biotech industry internationally, the U.S. government has largely ignored the growing opposition to unlabeled GMOs in the U.S. After the Obama Administration disregarded more than a million comments to the U.S. Food and Drug Administration (FDA) calling for mandatory GMO labeling, advocacy has moved to the state level, where more than 20 US states are considering GMO labeling.

But just in case they don’t win at the state level, the industry has a back-up plan: Agribusiness companies have been candid that they want the new U.S.-EU trade deal, currently being negotiated, to dismantle GMO labeling policies. Such rules would affect labeling in European countries and U.S. states.

This week, 70 U.S. NGOs from around the country wrote the USTR to demand it not restrict efforts to label GMOs in the ongoing secret U.S.-EU trade talks. The groups also warned against including the very controversial corporate rights provisions (known as investor-state dispute settlement), which grant corporations the right to legally challenge, through secret tribunals, regulations like GMO labeling that could affect future profits.

The secrecy of the US-EU trade negotiations, combined with the insider power of agribusiness and biotech companies, is a potentially toxic combination. IATP will present the letter to negotiators today at a USTR stakeholder meeting and convey the letter’s closing sentiment: “We will strenuously oppose any U.S.-EU deal that undermines U.S. consumers’ right to know what is in the food they purchase and feed their families.”