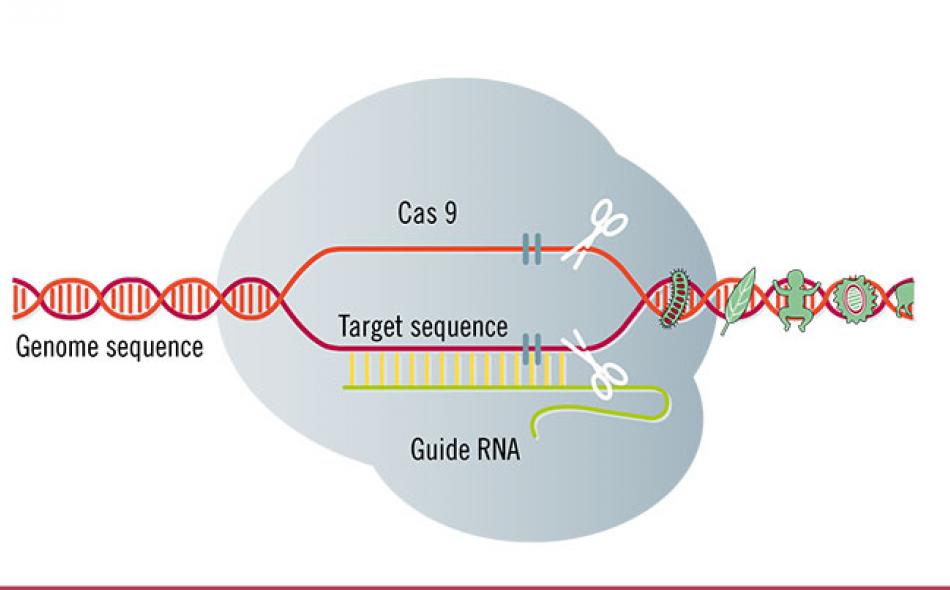 Diagram of the CRISPR CAS-9
Used under Creative Commons license from Test Biotech.

A long standing claim by the U.S. government and agribusiness lobby is that U.S. regulations on genetically engineered (GE) crops are science-based while European regulations are not.  For example, an April 8 letter from the American Soybean Association to the U.S. Trade Representative Michael Froman and U.S. Department of Agriculture (USDA) Secretary Tom Vilsack, states that “approval of these events [three GE soy crops] is now needed for the EU Commission to have any semblance of a working biotech approval system.” A “working biotech approval system” is that of the United States, which invariably “approves” GE crops, i.e. deregulates them, on the basis of an agency review of data and studies, some classified as Confidential Business Information, submitted by the GE crop developer.

This approach has been in place for two decades. For example, a Food and Drug Administration letter to Monsanto in 1996 states, “Based on the safety and nutritional assessment you have conducted, it is our understanding that Monsanto has concluded that corn products derived from this new variety are not materially different in composition, safety, and other relevant parameters from corn currently on the market, and that the genetically modified corn does not raise issues that would require premarket review or approval by FDA.” A 2013 FDA letter to Monsanto regarding a GE soybean “event” deregulates the product, but does not approve it, in almost identical language.

From the inception of U.S. policy on GE crops, science-based risk analysis has been systematically subordinated to trade policy objectives. A U.S. biotechnology lobby and diplomatic offensive to prevent European science-based regulation of the newest generation of GE crops and animals has delayed the scheduled release in mid-April of an EU legal opinion about GE rules for what the transatlantic biotech industry calls New Breeding Techniques.  U.S. officials warned that diverging from the U.S. (de-) regulatory regime would impede trade in biotechnology products in the context of the Transatlantic Trade and Investment Partnership (TTIP) Agreement negotiations. This latest subordination of science-based risk analysis to trade policy has a long history.

Documents discovered as a result of a lawsuit by the Alliance for Bio-Integrity against the U.S. Food and Drug Administration (FDA) show that FDA scientists vigorously protested in 1992 the draft “Coordinated Framework for the Regulation of Biotechnology,” a White House policy document. Dr. Louis Pribyl wrote of the draft, “What has happened to the scientific elements of this document? Without a sound scientific base to rest on, this becomes a broad, general, ‘What do I have to do to avoid trouble’ document. A scientific document is needed because there is very little (even when things are called scientific) scientific information supplied.”

The critical comments of Dr. Pribyl and other regulatory scientists discovered in the Alliance for Bio-Integrity lawsuit fell on deaf trade policy ears. The Biotechnology Science Coordinating Committee could not agree on the terms and scientific basis for the Coordinated Framework document, so the White House turned over U.S. biotechnology policy to the Council on Competitiveness, which finalized the draft in 1992

The Coordinated Framework remains the White House policy that dictates that U.S. agencies with statutory obligations to protect plant, animal, environmental and human health do so, but only to the extent of also promoting trade in the products of the biotech industry. In October 2015, the White House announced its intention to revise the Coordinated Framework to improve confidence in the U.S. regulatory system and to “Design a Long Term Strategy for the Regulation of the Products of Biotechnology.” IATP submitted comments in November.

The third question of five in the White House request for information about how to revise the Coordinated Framework, indicated that the “Long Term Strategy” would involve better public relations techniques. “How can Federal agencies improve their communication to consumers, industry and other stakeholders regarding the authorities, practices and bases used to ensure the safety of the products of biotechnology?” We answered that before Federal agencies devote more resources to focus groups, workshops and polling to improve communication about the agencies “authorities, practices and bases,” they should scrutinize what is being communicated, rather than merely the how of communication. Our response may well fall on deaf trade promotion ears.

To judge by the USDA’s April 13 deregulation of a GE mushroom designed to prevent browning and extend shelf life, there will be no fundamental change in the (de-)regulation of GE plants and animals. It appears they will continue to follow the Coordinated Framework mandate that U.S. agencies should promote trade in products of biotechnology. A powerful new GE process, CRISPR CAS-9, which makes it possible to edit plant or animal genomes much more quickly and extensively, modified the mushroom. The USDA deregulated it on the basis—once again according to information submitted by the product developer—that the CRISPR engineered mushroom did not contain an organism that is a plant pest or could potentially become a plant pest. By deregulating the GE mushroom, the USDA avoided having to conduct a pre-market safety assessment and issuing an affirmative approval of the product.

In an April 21 comment to the USDA  on revising its biotechnology regulatory practice, we cited a recent editorial in Nature: “What is new is the advent of CRISPR . . . because it makes gene drives much easier to create and could dramatically accelerate the timeline for a potential release—accidental or intentional . . . efforts to understand the ecological consequences of a gene drive should be made an urgent priority.” The ability of gene drives to copy the CRISPR-edited DNA from one chromosome to another in every generation means, according to Nature, that “newly introduced DNA will speed through a population exponentially faster than normal.” For example, pathogenic mold from CRISPR engineered mushroom spoors could spread through a mushroom population at warp speed.  Nevertheless, the USDA followed the instructions of the 1992 Coordinated Framework to (de-)regulate the GE end product only and not the GE process required to understand the ecological consequences of CRISPR-modified plants and animals.

In 2015, as the White House was beginning to revise U.S. biotechnology policy, it mounted, together with the Biotechnology Industry Organization and other lobbying groups, a successful campaign to prevent the European Union from adopting EU regulations on a new generation of GE crops and plants that would differ from U.S. deregulatory practices.  Links to European Commission correspondence with lobbying groups and U.S. officials were published in a briefing released on April 21 by Greenpeace, Gene Watch and Corporate Europe Observatory.

Here’s just one example of U.S. government lobbying on behalf of the biotechnology industry: according to the briefing, on November 3, “the US mission [in Brussels] also sent a letter to the Commission warning it of “unjustified regulatory hurdles” for “New Breeding Techniques.” It also rather ominously said that “different regulatory approaches between governments to NBT classification would lead to potentially significant trade disruptions.” How could the United States determine that EU regulations were “unjustified” for NBTs when the EU Legal Opinion about regulating NBTs was not scheduled for publication until November 19?

One possible source of U.S. intelligence about unpublished EU documents on the NBTs is a continuation of U.S. National Security Agency spying on EU officials and European corporations, first brought to light by former NSA official Edward Snowden.  Erich Pica, president of Friends of the Earth U.S., said of the most recent revelations of NSA commercial espionage, “The spying on European Union and French embassies is characteristic of the secretive and ruthless style of contemporary trade and investment negotiations.”

Whatever the benefits may be for the corporations at whose behest and with whose input the TTIP is being negotiated, the benefits that President Barack Obama declared to be “indisputable” during an April 24 dinner with 29 U.S. and German CEOs do not include strengthening democracies.  Surely, German Prime Minister Angela Merkel, whose personal cell phone calls were monitored by the NSA, must harbor doubts that such a ruthless trade negotiations process can produce a trade policy product that is supported by a majority of Germans.

Finally, consider the impact of the U.S. TTIP negotiating process on the transatlantic biotech industry strategy to “harmonize” EU rules on GE crops down to the U.S. deregulatory practice. If what is required to import GE soybeans and other crops in European member states is to emulate the U.S. practice of not regulating the processes by which a new and more powerful generation of GE plants and animals is created, how long will it be before EU scientists are asking themselves, as FDA scientist Dr. Louis Pribyl did of the draft Coordinated Framework in 1992, “What has happened to the scientific elements of this document?”

Or more broadly, since scientific evidence and principles have been subordinated to a trade policy that relies on U.S. espionage to obtain TTIP negotiations advantages to set the terms of the agreement, will TTIP “succeed” only by weakening both science and democracy in Europe, as well as in the United States?